Nigerian Players Paint Europe With Goals, Check Out The Brace That Was Scored Away From Home

By Nwanna (self meida writer) | 1 months 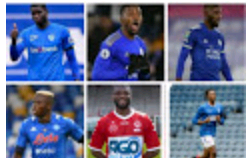 Leagues across Europe witnessed goals scored by Nigerian players. The players but one were invited to the just concluded African Cup of Nations qualifier. They are Joseph Aribo of Rangers, Terem Moffi of FC Lorient, Paul Onuachu of Genk, Victor Osimhen of Napoli and Kelechi Iheanacho of Leicester City. Only Terem Moffi was not invited when Nigeria played against the Republic of Benin and Lesotho but he was on the standby list.

In Scotland, it was the seventh goal for Joe Aribo as he scored a twentieth-minute goal against the Hibernian club. The euphoric Joe and his teammates have been announced the winner of the championship after making it an unassailable lead. They are now waiting for the final day to receive the trophy. It was a match day thirty-four and the Nigerian scored in the three-goal thriller that ended at 2:1.

In France, a Calabar born Terem Moffi scored to increase his tally this season. Though it was a loss for them as the match ended at 4:1, he made good use of Enzo Le Fee assist in the twenty-ninth minute to score the goal. He has now scored the ninth goal for the Ligue One side in twenty-six appearances since 2020.

In Belgium, Paul Onuachu continued with his goal banging. He made it goal number twenty-seven against St. Truiden in a four-goal thriller that saw them taking it all. It was his penultimate game for Genk in this season.

In Italy, Victor Osimhen scored just when it was three minutes to end their game against Sampdoria. It would have been a brace if not for the offside goal rule. His first goal was cancelled in the forty-eight-minute.

In England, Kelechi Iheanacho made it goal number eight for the season. He scored a brace in a game they played against West Ham in an away match. It is now eight goals in six appearances in all competitions. Though it was a loss for them as the Hammers handed them three goals before he scored, they caught fire in the end but time did not permit them to equalise.

Which One Of These Players Is Chelsea's Best Summer Signing?

Today's Headlines: Barca offer Pjanic In Exchange For Chelsea star; Man U Skipper Ruled Out Of The Season

Chelsea loanee breaks Cristiano Ronaldo record in the Seria A