Who will win this Season's Champions League?

By Precious_A (self media writer) | 2 years ago Now we know what the draw looks like, it’s a very simple Great Debate this week.

Who will win this season’s Champions League?

-I actually think this is PSG‘s year. Just like I said in our season preview. Sooner or later, Neymar and Mbappé will be too hot to handle and I think this format, with one-off games, could really suit them.

They come into the mini-tournament fresher than everyone else, they only have to play three games, and they’re on the side of the draw without Bayern Munich and Manchester City.

-Imagine your answer being anything but Atalanta. The boys from Bergamo are scoring at will and could match anybody in a one-off fixture. They are devastating going forward, balanced in midfield and more importantly? Extremely likeable – from goalkeeper, to centre forward, to Gian Piero Gasperini lighting up the touchline.

-The fact that the Champions League will be decided with one-legged ties instead of two gives it slightly more unpredictability, but over the course of 90 minutes you’d be hard pressed to find a team who will beat Bayern Munich. 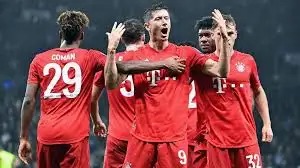 They’ve got the tougher side of the draw for sure, but with their convincing victory against Chelsea and the domestic double accomplished since the return of football, Hansi Flick’s side are looking unstoppable. The clear favourites in my eyes.

Since the restart Diego Simeone has got his side back to their old ways, climbing up the table thanks to that reliable defence and the reinvention of Marcos Llorente as an attacking force.

They face RB Leipzig in the quarter-finals and then one of Atalanta and Paris Saint-Germain in the semis. It’s theirs for the taking.

Simeone has them purring again and the one-off game structure could work in their favour, with their ability to find a goal and defend a lead to the death. They also knocked out the current holders which counts for something.

-Of course it is going to be Manchester City.

Hot on the heels of being given a CAS reprieve to compete in the tournament next season, I think they’ll do so as defending champions. Everything is set up for them to give Uefa another almighty black eye by going on to lift the biggest prize of them all.

Content created and supplied by: Precious_A (via Opera News )