By Elzpro (self media writer) | 1 year ago 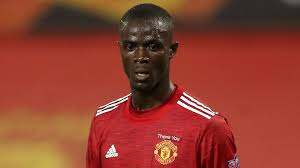 Eric Bailey has signed a new Manchester United contract that will keep him at the club untill 2024, with an option of a further year.

The player has struggled for playing time this season but confident that it will improve after signing a new contract with the club - even tho his representatives has already been alerted by other clubs that are interested in the 27 year old centre back.

After discussions with the manager and united, the player feels more confident that he will be given a role to play and has now committed his future with the red devils.

Eric bailly is very happy that he signed the new contract and he also said that it was something that he didn't had to think about, because he loves the club and loves playing for Manchester United - also very pleased with it, as well as his family also.

Solskjaer is very pleased as well and also very happy that he extends his stay with the club. He also talked about his improvement and how his going to be part of his squad. He also added that he possesses fantastic speed, timing of tackle and has that aggression which of course he'll need as a centre back. He's a popular player and a popular member of the squad and looking forward to continuing with him going forward.

The Ivorian joined from Villarreal in the summer of 2016 and signed an extension in January 2020 to keep him at the club u ntill 2021-22 campaign.

Despite his injuries, he has only made 15 appearance with the club this season and most recently covid 19 keeping him sidelined behind first - choice pairing Victor lindelof and Harry Maguire.

He has made 100 appearance in all competitions, a number which would have gone higher had he not suffered serious injuries.

Content created and supplied by: Elzpro (via Opera News )