Former WWE Superstar Opens Up About His Kiss With Stephanie McMahon 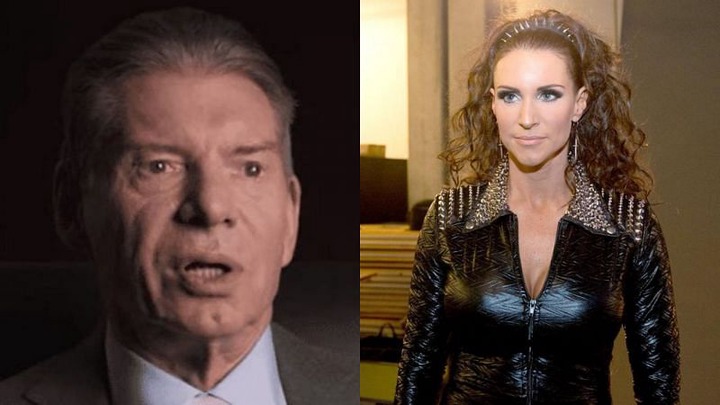 Kurt Angle spoke about his rookie year in the WWE during the most recent episode of 'The Kurt Angle Show' on AdFreeShows.com. The Olympic gold medalist was booked into a love triangle involving Stephanie McMahon and Triple H in 2000, and the storyline spawned several memorable moments.

Kurt Angle recalled how nervous he was during the segment in which he kissed Stephanie McMahon backstage.

The former WWE champion accepted that he felt 'really weird' about the whole angle as Stephanie McMahon was the boss' daughter and Triple H's real-life love interest.

Angle revealed that the segment in question was supposed to be a one-take, scheduled to air live.

"Oh, this was ridiculously weird. I mean, you know, come backstage with Stephanie, and I had to do a pre-tape that was going live. So, we weren't going to tape it; it was going to be a one-take. I think Vince did that on purpose, so we only had to kiss once. But, I also know we didn't have the time to pre-tape it, so that was probably the real issue," said Kurt Angle.

Vince McMahon took a particular interest in the segment and directed it himself, much to the surprise of the former WWE Champion.

It is hardly astonishing to note that Kurt Angle felt quite uneasy while filming the segment. The WWE Hall of Famer revealed that Vince McMahon was four feet away from him when he kissed Stephanie McMahon, making the taping even more uncomfortable for the Olympic Gold medallist. Kurt Angle said the WWE Chairman was keenly watching with his eyes wide open.

"But, you know, we got backstage, and Vince wanted to direct it (laughs). I was like, 'holy s***,' Vince McMahon, Stephanie McMahon's father, is going to direct me kissing her during a pre-tape. I was nervous as hell. Vince was four feet away, and his eyes were this open; he was just looking. I'm like, 'This is so weird, man.' I don't know how I'm going to do this, so I went down to kiss her, and we caught eyes, and then we went to kiss and stuck my lips out like this," said Kurt Angle.

While some WWE fans might already know this, Stephanie McMahon told Kurt Angle after the segment that he kissed like a fish. Angle responded by explaining that he had no option as he didn't want to disrespect Triple H.

"I didn't want to go with an open mouth because Vince was there, and I didn't want to disrespect Triple H or Stephanie, but I kissed her like this, and after the pre-tape, she goes, hey, 'You kiss like a fish.' I was like, 'What did you expect, Stephanie? Your dad's here watching, he's directing, and you're dating Triple H. It's like, what do you want me to do (laughs)," said Kurt Angle.

It's safe to say that WWE put the Olympic Gold medallist in a very tricky spot during his rookie year in the WWE.

Thankfully for all involved parties, Angle's feud with Triple H and Stephanie McMahon helped him evolve as a performer, and it even catapulted him to world title success in WWE in record time.