At 35 Years Old Ronaldo set Another Record, After Scoring Two Goals Against Lazio Cristiano Ronaldo will not stop breaking records even at 35 years old. The Portuguese superstar who play for Serie A gaint Juventus break another record in juventus .

Ronaldo score his first goal of the night from the penalty spot on 51 minutes , The superatar then got his side second goal 3 minutes later after scoring from a brilliant assist from Paulo Dybala .

The goals Ronaldo made Ronaldo tally for the serie season to 30 goals equal with Ciro Immobile who played for lazio in the defeat. 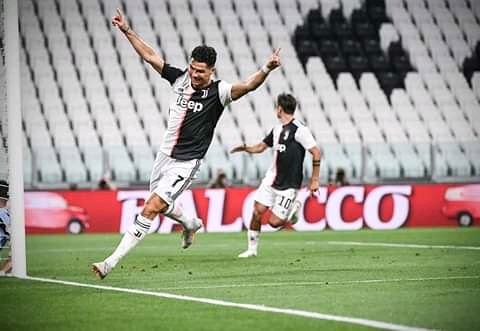 After scoring his 30th of the Serie A season , Ronaldo become the first ever player to score 50 or more goal in La liga, Premier League, and the Serie A.

At 35 years old Ronaldo keep breaking records, this will add to his glorious number of career records. The Portuguese superstar is regarded by many as one of the greatest player of all time.

No doubt Ronaldo is the man for the big occasions. The victory moved Juventus 8 points above second place Inter Milan who are on 72 points. Ronaldo and Juventus will be hoping o win the scudetto for a record 9th consecutive time.

Ronaldo latest goals mean he just 4 goals behind Lewandoski for the European golden boot award, with four games to play for in the serie A. Ronaldo will be hoping to close the gap between him and lewandoski in the upcoming matches for Juventus.

Do you think Ronaldo can win the golden boot Award?