NXT TakeOver: In Your House - Top 5 Performers At The PPV

NXT delivered beyond expectations with yet another PPV as TakeOver: In Your House presented a compelling show throughout its run time. The Black and Gold brand’s PPV witnessed one title change hands, whereas two Championships were retained.

Io Shirai defeated Charlotte Flair and Rhea Ripley in a triple-threat match to become the NXT Women’s Champion for the first time. Keith Lee successfully defended his North American Championship against Johnny Gargano, whereas Adam Cole defended his NXT Championship with a win over Velveteen Dream.

The show also saw the TakeOver debut of Karrion Kross, who ended up picking up a surprisingly quick win over Tommaso Ciampa. Besides, Finn Balor picked his 11th TakeOver victory and made history tonight at the PPV.

In this article, we will take a look at the top five performers at NXT TakeOver: In Your House. So, without further ado, let’s begin.

Velveteen Dream had a last shot at winning the NXT Championship when he squared off against Adam Cole at NXT TakeOver: In Your House in a Backlot Brawl match. Unfortunately for Dream, he fell short in the face of Cole’s devious techniques, who used a low blow to pick up a victory to extend his historic title reign.

The ring for this match was set up in a parking lot and it was surrounded by cars that had the WWE talents seated inside. The headlights of these cars were used for lighting the ring. Cole and Dream were allowed to take the fight anywhere they wanted but they had to end the match inside the ring. Both Superstars exchanged brutal blows throughout the match and Dream dominated most part of their encounter.

At the recently-concluded NXT TakeOver: In Your House PPV, Finn Balor defeated NXT Superstar Damian Priest in an excellent match and set a milestone by becoming the first Superstar to pick up 11 victories in TakeOver history. The two Superstars engaged in an excellent back and forth match that showed equal dominance from both 'The Prince' and the 'Archer of Infamy.'

The build-up to this match between Balor and Priest was short but had enough substance in it to keep the WWE Universe interested. It was revealed that Damian Priest was the man behind the sneak attack on Finn Balor and the latter was hungry for his revenge.

In the last two months, Priest had lost two opportunities to win the NXT North American Championship. As a result, he wanted to take down someone like Finn Balor in order to up his stakes on the Black and Gold brand.

Priest entered the TakeOver: In Your House PPV with that intention and definitely delivered one of his best performances. He dominated quite a few times in the match but unfortunately for him, it wasn't enough to keep Balor from fighting back and eventually picking up the victory.

Towards the end of the match, Priest planned on throwing Balor onto the steel steps using a top rope chokeslam. Balor, however, fought back and found a way to reverse the move. Instead, it was Priest who crashed into the stairs after being hit with a firearm. Following that, Balor hit Priest with a Coup de Grace on his back and then repeated it from the top rope to pin his opponent to pick a historic victory in WWE NXT.

Now that Balor has won his match, he will soon find himself in the title picture. It should be interesting to see who will be Finn Balor's next opponent and how long it will take for him to get his hands on NXT gold after achieving a significant milestone tonight.

n the shortest match of the night, new NXT arrival Karrion Kross picked up a convincing victory over Tommaso Ciampa in his first TakeOver appearance. The two Superstars locked horns in a fast-paced Single's match that was relatively one-sided and ended with Kross pinning Ciampa for the win.

The build-up to this match started when Ciampa lost his 'final match' against Jonny Gargano. When the latter was leaving the scene, Kross was spotted in the background, seated in a car with Scarlett. Soon after that, he made his NXT debut and defeated Leon Ruff in a squash match. After that, Ciampa said that the two Superstars will now lock horns at TakeOver because he wanted to avenge an attack laid on him by Kross.

Unfortunately for Ciampa, things didn't go as per plan tonight. Kross dominated this match right from the get-go and looked like a beast inside the ring. At one point during the match, an agitated Cimapa started hitting back with consecutive strikes to gain an upper-hand.

Ciampa then used a Widow's Bell for a near pinfall but Kross managed to lift up his shoulders. He then used a Kross Jacket to put Ciampa to sleep and win his TakeOver debut match with a submission.

This match did more than enough to establish Karrion Kross as one of the biggest threats in NXT now. A victory in this fashion over Ciampa at a TakeOver PPV tells us that we will soon see him in the title picture.

As for Ciampa, he has already established himself as one the best Superstars to ever step inside the NXT ring and his ironclad stature on the roster barely suffered a dent while simultaneously putting over a debuting Superstar who has some excellent momentum on his side.

Tonight, Keith Lee successfully defended his NXT North American Championship against Johnny Gargano in a Single's match that saw a lot of drama and interference in addition to a fantastic performance from both the Superstars involved.

Since turning heel, Johnny Gargano has targeted the entire NXT roster and he had a bone to pick with Keith Lee and Mia Yim. In fact, on the go-home show before the TakeOver: In Your House PPV, Gargano attacked Lee with his car keys and injured his eye.

Tonight, however, none of those antics were enough to stop the 'Moment Maker.' The two Superstars relied on their speed and strength to find dominance in the match. Gargano used his speed to his advantage. On the other hand, Lee - who is deceptively fast for his size - decided to use his strength to keep Gargano from dominating the match.

During several spots in the match, we saw Gargano's series of offenses meeting a single yet effective response from the Champion.

Lee also managed to put Gargano through the plexiglass. Just when the Champion was carrying his opponent back to the ring, Candice LeRae decided to interfere. However, she was stopped by Mia Yim while Gargano once again took out his keys to attack Lee in the

Following that, Gargano made multiple attempts to pin Lee, but the latter sat back up every single time. Finally, he put an end to Gargano's momentum with a Spirit Bomb and followed it quickly with a powerbomb. He then delivered a Big Bang Catastrophe power slam to pin Gargano and successfully retain his NXT North American Championship. 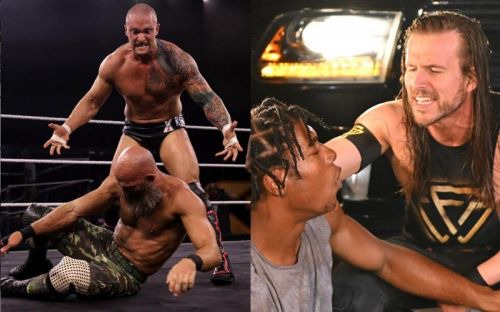 The match kick-started with Charlotte Flair rolling out of the ring and asking Shirai and Ripley to fight instead. But soon after that, we saw the three women brawling inside the ring with a ferocious exchange of blows. Charlotte and Ripley looked strong inside the ring and Shirai appeared to be an underdog. But as the match progressed, Shirai managed to gain more and more momentum and had an upper-hand over both her opponents in several instances.

At one point, Charlotte Flair drove Shirai's head into the ring post. The Queen then turned her attention to Rhea Ripley and the two rivals brawled right underneath the 'House' prop near the entrance.

In the meantime, Shirai found her way to the top of the 'House' and dove onto her opponents from the top to take them out. After a while, Charlotte Flair found a kendo stick and used it to attack both her challengers. Flair then locked Ripley to finish the match with a figure-eight submission, but Shirai delivered a beautiful moonsault off the top of the ring onto a struggling Ripley.

Charlotte couldn't untangle her legs, which allowed Shirai to pin Rhea Ripley and win the title for the first time on the Black and Gold brand. It will be exciting to see what's in store for the newly crowned NXT Women's Champion.