By Danladi (self media writer) | 1 month ago

The English Premier League is back and it has been thrilling in the games played so far with goals recorded in several games including the thrilling encounter between Manchester United and Leicester City. The game is one of United's many tricky fixtures which they have lined up for October and November.

The first half of the game was pretty entertaining as both teams went forward in search of goals which they both found in the space of twelve minutes. The second half was even more thrilling as both teams added a combined four goals to seal the game in what was described as one of the most entertaining games after the International break. Below are 3 things that happened in the game that contributed to Leicester's victory;

1. Iheanacho covered more grounds closing down United's defence and he did it pretty well which helped his team get their first goal. It was as a result of his actions he was able to recover the ball from Harry Maguire and lay it over to Tielemans who executed it beautifully and equalized for Leicester in the first half.

The right flank of the pitch witnessed and energised Iheanacho who kept moving back and front to help the team whenever they were in need. Iheanacho was also able to create chances for himself and his teammates on other occasions even though he couldn't finish the chance towards the final few minutes of the first half.

With his high pressing game today alongside other attacking players, Leicester City were able to record a whopping eleven shots on target over 90 minutes. With his recent improvements, he has been involved in 23 goals in his last 26 games for Leicester in all competitions (17 goals, 6 assists).

2. Harry Maguire played under pressure against his former team and this could tie to the fact that he just returned from Injury since September against Aston Villa. Ole Solskjaer in his press conference said he started training recently but he ought not to have started the player if there was another high-ranking defender available to play against Leicester; unfortunately for him, Varane is also out injured. Maguire made several mistakes including forced clearances to give Leicester cheap throw-ins in United's half and he was also caught off-guard by Iheanacho which led to Leicester's first goal. Manchester United's defence which Maguire was part of were beaten several times and Da Gea had to make 7 saves according to the match's data.

Solskjaer in his post-match conference also stated that Da Gea was the team's best player but still conceded four goals.

3. Ronaldo was silent except for the shot on target he had which was saved by Schmeichel. Leicester were able to dominate the midfield as a result of Maddison's key position behind two attackers, Iheanacho and Vardy who had to drop deeper from time to time to help the team. 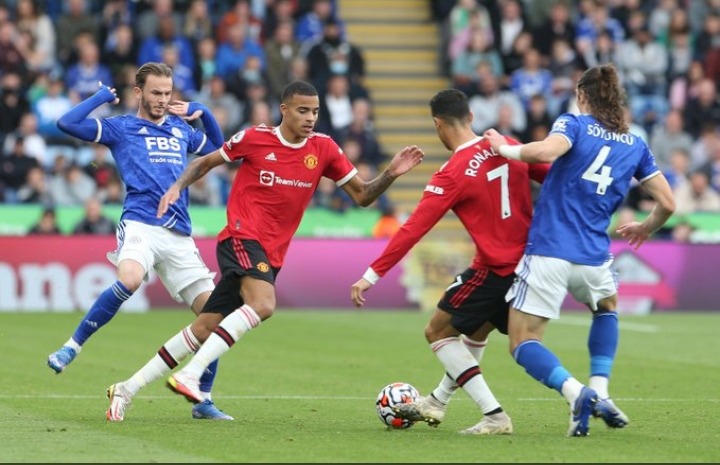 As a result of that, Ronaldo was left idle chasing Leicester's defenders trying to close them down but it didn't work out as Leicester's defenders were all in top form. Leicester's attacking line managed to pose serious threats to Da Gea than Ronaldo did to Schmeichel. It's no surprise that Leicester were arguably the better team and earned all three points which were fully deserved.