The midfielder has warned that a change in the dressing room will not help the struggling club.

Barcelona midfielder Frenkie de Jong has warned against dismissing manager Ronald Koeman, despite the club's 3-0 defeat to Benfica in Europe on Wednesday putting even more pressure on the already struggling club. 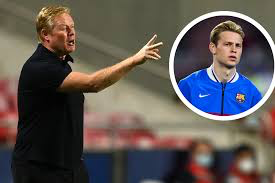 De Jong claimed Koeman was not to blame for the Blaugrana's poor form in recent weeks, as they have won just one of their last five games and are off to their worst Champions League start ever.

Meanwhile, Koeman thanked his players for their support following the Benfica defeat as he tries to come to terms with the magnitude of his team's recent relegation.

De Jong told reporters, "I can't talk about Koeman; it's not for me to say." "I don't believe that replacing the coach will help.

“In the end, the simple thing is to [dismiss Koeman],“ Sergio Busquets agreed with his teammate. But we all have a role to play. We're in a precarious situation."

Meanwhile, Koeman praised his players' demeanor while admitting to being unsure how the club's executives perceive his situation.

"I feel backed by my guys and their approach," Koeman said. I'm not sure about the rest of it.

Who could take Koeman's place at Camp Nou?

If Barcelona fires their coach, Roberto Martinez is a strong contender to replace him right away.

After Barcelona's loss to Benfica, Koeman admits his future is uncertain.

The sides have been in talks, according to Goal, however no concrete deal for the Belgium manager has been reached.

Before firing Koeman, the Blaugrana are said to be looking for a replacement.