UEFA Coaches Of The Year Nominees

By SportsGist1 (self media writer) | 5 months ago

The Union of European Football Associations, UEFA, on Thursday announced the names of the three nominees shortlisted for the 2020/2021 UEFA coaches of the Year Awards. The coaches are as follows: 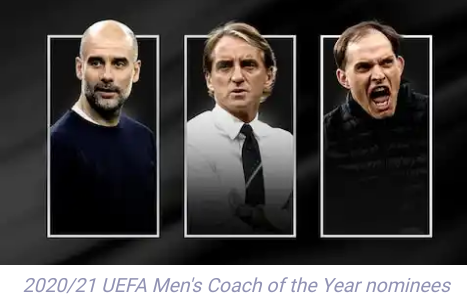 Josep Guardiola (Manchester City) guided City to their first UEFA Champions League final and restored them at the apex of English domestic football, finishing 12 points clear in the Premier League and lifting the League Cup.

Roberto Mancini (Italy) was the puppet master behind the Azzurri's remarkable rise from failing to qualify for the 2018 FIFA World Cup to winning UEFA EURO 2020 in thrilling style, the final their 34th game unbeaten.

Thomas Tuchel (Chelsea) who is a game changer and sensational turnaround after replacing Frank Lampard on 26 January, leading Chelsea to their second UEFA Champions League title , the first coach to reach successive finals with different clubs.

Their nominations came as each coache in Europe, irrespective of their nationality, have been judged in regard to their performances over the whole season in all competitions – both in domestic and internation encounter at either club, or national team level.

The shortlist of these coaches nominees were conducted in a very transparent manner by a jury comprising the following:

55 journalists selected by the European Sports Media (ESM) group, one from each of UEFA's member associations

Jury members chose their top three coaches, with the first receiving five points, the second three and the third one. Coaches were not allowed to vote for themselves according to UEFA official website.

The award winners will be announced at the 2021/2022 UEFA Champions League group stage draw ceremony, which will take place on Thursday, 26 August at the Haliç Congress Center in Istanbul, Turkey.

Content created and supplied by: SportsGist1 (via Opera News )