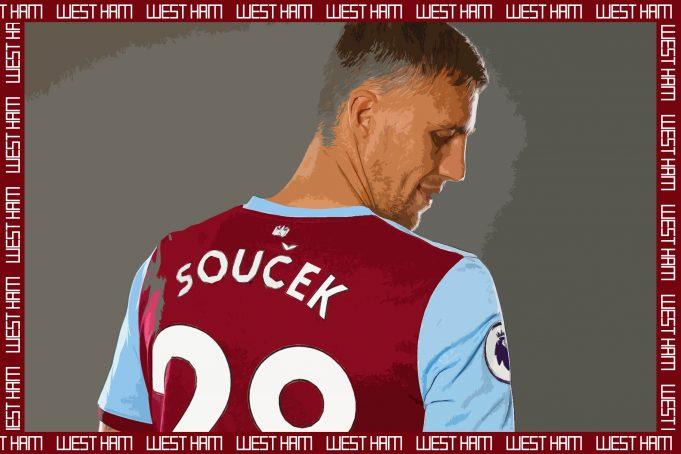 The Czech international midfielder made his senior league debut for Slavia Prague against Viktoria Žižkov on 8 March 2015 and scored his first league goal in Slavia Prague’s 4–0 home win against FC Vysočina Jihlava on 15 August 2015.

Souček finally had his breakthrough season in the first team in 2015/2016 and played 29 league matches, missing only one game all through the season.

During 2016 summer, due to the arrival of Michael Ngadeu-Ngadjui, Souček relinquished his position in the first team to the new arrival and it limited Souček’s game time, with only 93 minutes being played in three months within September and December 2016.

He played in Czech Cup final against Jablonec, as Slavia Prague won the Cup in 2017/2018. While in 2018/2019 season, the Czech international midfielder won the domestic double with Slavia Prague and was given the Czech First League Player of the Year award.

Considering Souček’s great performances and his sudden rise, the 25-yrs-old defensive midfielder was rewarded with a contract extension on 17 June 2019, until 2024.

On 29 January 2020, Tomas Souček joined West Ham on an initial 6 months loan deal until the end of 2019/2020 season, with an option to make the transfer permanent in the summer being included in the deal.

Soucek has two goals to his name for the Hammers already. Building a reputation as an energetic defensive/centre midfielder with the ability to be defensive and attacking competent.

Standing at 6ft 4in, he’s known for his strong physical presence, possessing an intimidating frame and energy which has aided his Premier league adaptation.

The Czech international midfielder has stroked a great partnership with Declan Rice which has allowed the Hammers to have become more compact and solid in the middle of the park.

Due to his spell seemingly fruitful so far, Souček has reiterated his desire to remain with the Hammers beyond this season, hinting the club concerning his readiness to commit his future with West Ham amid an option to make his loan deal permanent being inserted in his contract.

“I’m playing with guys that I’ve played with for four or five months but I’m really enjoying it and hopefully we’ll be safe and I will be able to enjoy more years,” Soucek said at Carrow Road. “I would play in the Czech league and Champions League, but here when I play every game is like playing in the Champions League, every three days it is like the Champions League. It is great.”

Though the Czech First league can’t be compared with the Premier league intensity but the Czech international midfielder has undoubtedly shown his qualities that he’s capable of being an important player for the Hammers in the nearest future.

Declan Rice seems likely to be heading towards’ the exit door due to Chelsea’s rumoured interest in the England international midfielder, which makes Tomáš Souček’s permanency the safest option to either replace the youngster or continue the adventure of playing alongside Declan Rice next season incase Rice’s deal fails to go through.