By LeeJr (self media writer) | 1 year ago 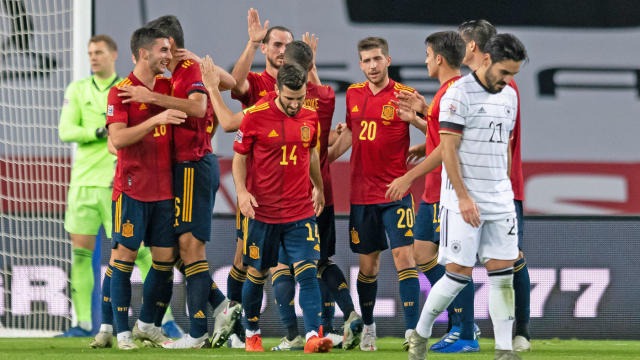 Tuesday the 17th of November saw several matches take place in the Uefa Nations League competition currently being played during the ongoing international break. Of all outcomes of the ties which went down, the most shocking was the scoreline between Spain and Germany at the Estadio de la Cartuja in Spain. It ended in an emphatic 6-0 defeat to the Germans much to the delight of the Spanish manager, Luiz Enrique and to the disappointment of the German Squad and their highly rated manager, Joachim Low.

It was a very wonderful night for the Spaniards who did everything well both in offence and defence. The signs that it was going to be a rather crazy night began in the 17th minute when Alvaro Morata converted a header from Fabian's perfect corner kick cross. The goal was greeted by huge celebrations especially from the forward who lately, has been struggling to find his form for his country. The Second goal took another 15 minutes to come and this time it came from non other than the man of the day; Ferran Torres after he smashed home a rebound from Dani Olmo's header which hit the crossbar.

From then on, the contest turned to a Spanish rampage with Rodri getting a third on the 38th minute mark while Ferran Torres managed to claim the match ball after getting the 4th and the 5th goals on the 55th and 71st minutes respectively. The fate of the Germans was finally sealed by Mikel Oyazarbal after he scored the 6th on the 89th minute and handed Germany their heaviest ever defeat in a competitive fixture.

The pressure has now been mounted of the German manager to take his team back to the level they were when he helped them to being crowned the world champions in 2014. It's not an easy task right now but it's certainly a very realistic one seeing the kind of talents which Low has at his disposal. The likes of Timo Werner and other youngsters like Leroy Sane, Serge Gnabry and even aged first choice Goalkeeper and Captain Manuel Neuer would now be called to step up ulike never before or risk falling out of favour in the coming months.

Content created and supplied by: LeeJr (via Opera News )