By Haxandamilola (self meida writer) | 10 days

Senator Orji Uzor Kalu who is the former Governor of Abia State has disclosed that the reason why he wanted buying Arsenal Football Club back in 2020 was to make more money. 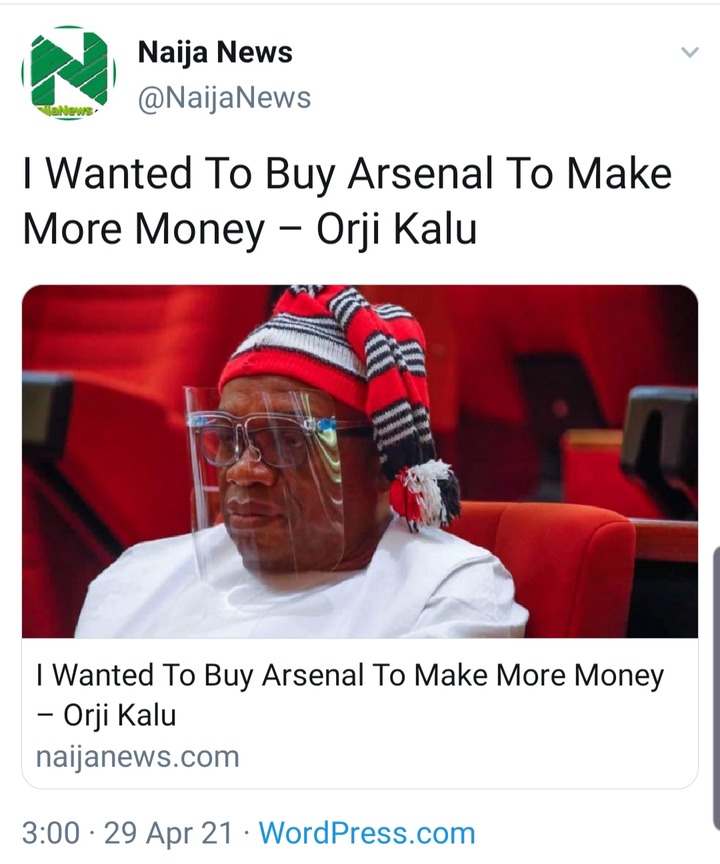 The Senate Chief Whip on Wednesday said his interest in Arsenal was purely based on business to make money as he is not a fan of the English Premiership club.

According to reports, In November 2020, Orji Uzo Kalu who has been a supporter of Eyimba United had shown interest in buying a 35% stake in Arsenal.

However, Orji Uzo Kalu disclosed that Arsenal failed to follow up his proposal, despite writing a formal letter to the club to make his intention known, as well as been backed by one of the biggest bank in America. 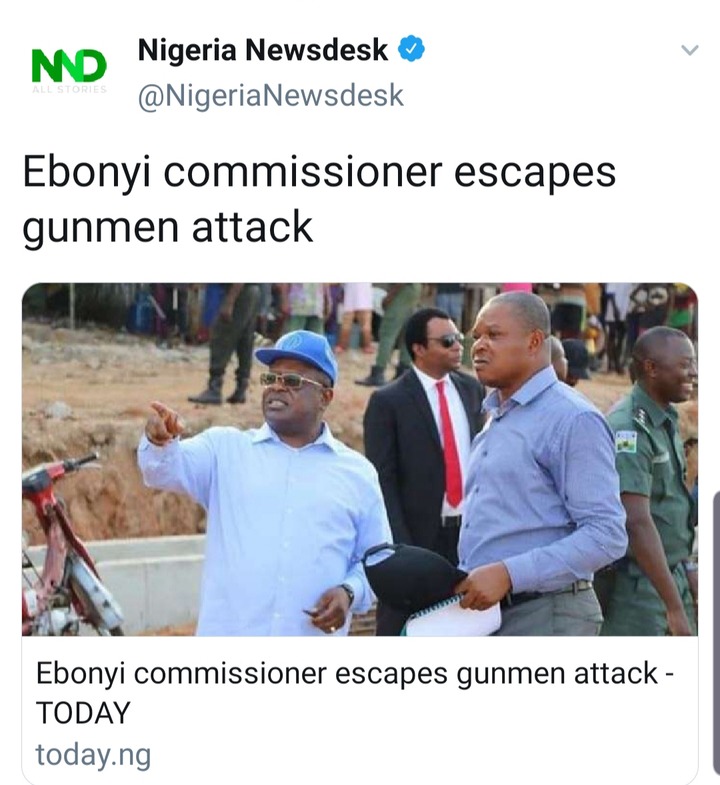 The issue of insecurity in Nigeria is getting worse on daily basis, as Ebonyi State Commissioner for Infrastructure Development, Engr. Fidelis Nweze, narrowly escaped gun attack on Tuesday. The Commissioner had to abandoned his car and ran into the bush in order to save his life.

The incident happened at the site of a proposed international airport in the State.

The gunmen were feared to have targeted the State Governor, Dave Umahi who was scheduled for an inspection visit to the airport.

According to reports, it was gathered that the gunmen stormed the airport site at about 3:30 p.m. but missed their target as the Governor failed to turn up.

However, the gunmen who reportedly came on seven motorcycles and two vehicles ended up robbing a nearby bank (Withheld bank), killing two police officers in the process.

(3) Sanwo Olu Flagged Off The Construction Of New Children Hospital 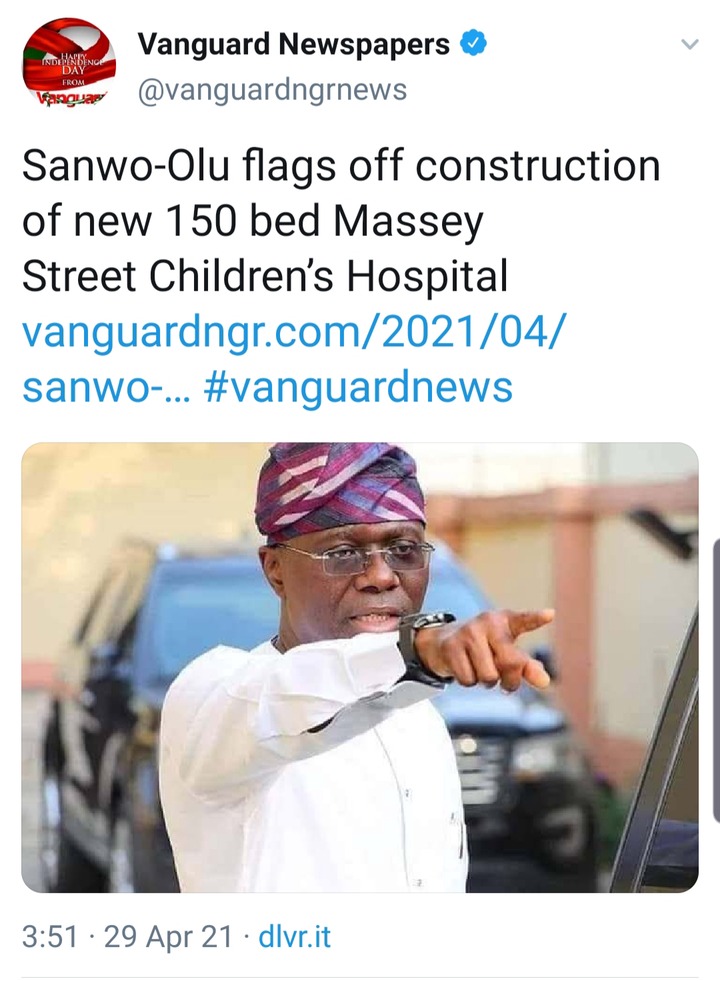 The Governor of Lagos State, Mr. Babajide Sanwo-Olu, on Wednesday, flagged off the construction of 150 new Massey Street Children hospital even as he commissioned other critical medical infrastructure in fulfillment of his Greater Lagos agenda.

Speaking at the ground-breaking ceremony for the New Massey Street Children’s Hospital, the Governor said his administration is determined to bridge all gaps in the health sector.

There is a saying that "everyday is for the thief but one day is for the owner", as five suspected armed robbers met their Waterloo on Tuesday in Apo area of Abuja as angry traders fished them out and killed them instantly in what could best be described as jungle justice. 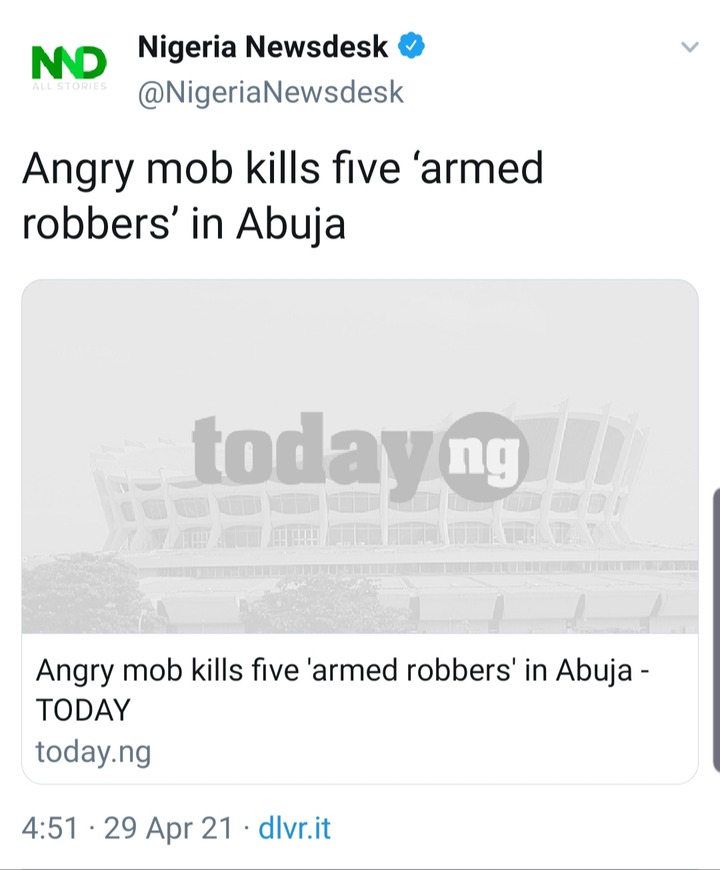 According to reports, it was gathered that the heavily armed robbers, robbed PoS operators and traders around Apo Mechanic Village successfully.

However, luck ran out on them when one of the traders recognised one of them and led other traders to his house, killing two of them on the spot. The other three were later traced to Kabusa and Waru areas, were they were dragged out and killed too.

I think as civilised as the world is today jungle justice can't solve any of our insecurity problem, rather it will add to our problems What do you think about the traders' action?