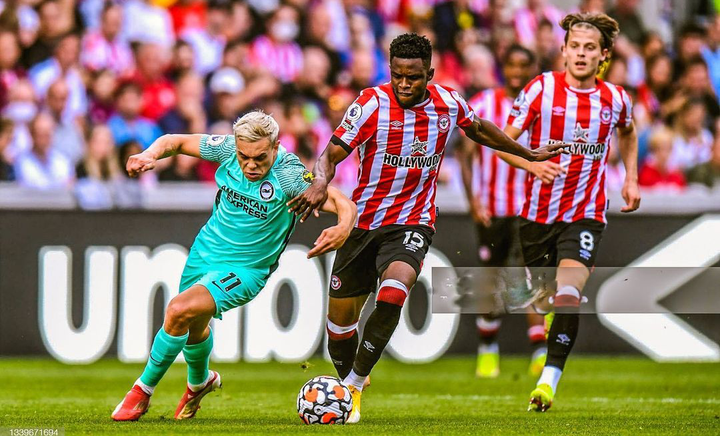 Super Eagles of Nigeria midfield maestro Frank Onyeka was in action for Brentford football club on Saturday afternoon, as they defeated Wolverhampton Wanderers FC 2-0 at Molineux Stadium in the week 5 of the English Premier League. The former FC Midtjylland of Denmark star was given a playing time by his coach, and he was able to coordinate his team's midfield.

Frank Onyeka was introduced in the early minutes of the second half to replace Spain star Sergi Canos, and he was exceptional in the game. Former Newcastle United star Ivan Toney opened scoring for the away team in the 28th minutes via a penalty kick, and Bryan Mbeumo doubled the lead in the 34th minutes after receiving an assist from Ivan Toney to end the first half 2-0.

Both teams tried so hard to score more goals in the second half of the game, but all their efforts were not successful, as the match ended 2-0. Frank Onyeka was superb for the away team after being introduced to the pitch, and he was able to win some tackles and made many clearances in the game.

The 2-0 victory over Wolverhampton Wanderers FC has now taken Brentford football club to the 9th spot of the English Premier League table with 8 points from 5 matches played.