Manchester united and their rival Chelsea football club are set to clash against each other in their next game (FA Cup semi-final), following their quarter-final qualification.

Base on the important consecutive games Manchester united have had and their upcoming games, it will be very necessary for Manchester united manager, Olé Gunnar Solskjaer, to rest some of his players. Some of them are; Anthony Martial, Mason Greenwood, Nemanja Matic, Victor Lindelof and David de Gea.

As their fixture is already scheduled, Sunday, 19th July, 2020. Below is the predicted Manchester united XI against Chelsea (4-2-3-1).

Sergio Romero: David de Gea will have to rest so that Romero will continue playing the FA Cup fixtures and also in other to refresh him (De Gea) for the upcoming games. Manchester united will need Sergio Romero to play his best against Chelsea football club.

Wan-Bissaka: Bissaka should have been rested but the Manchester united defense is stronger when he is on the pitch.

Eric Bailly: Bailly will have to replace Victor Lindelof in other for him to prepare well for his next game. This is the chance, Eric Bailly have to correct the error he made against Bournemouth and to show the manager that he should be the first choice center back.

Harry Maguire: There is no benching of Harry Maguire at the moment as he can play more games with no or too much stress. He is capable of playing more games since his days at Leicester city.

Luke Shaw: Olé Gunnar Solskjaer will be delighted to have Luke Shaw back to his first team squad, since the injury he got from the clash against Southampton player.

Fred: Fred will have to replace Nemanja Matic and he (Fred) deserved to play more games as he have performed better this season.

Paul Pogba: Olé Gunnar Solskjaer need Pogba to be at his best form so that Manchester united can score more goals to win the game early, in other for Olé to be replaced him because he also need to rest.

Bruno Fernandes: As Paul Pogba, likewise Bruno Fernandes, they will need to kill off the game early by creating more chances and scoring more goals.

Marcus Rashford: With the impressive recent games for Manchester united, Rashford is expected to continue his good form against Chelsea football club.

Odion Ighalo: Odion Ighalo will have to bench Anthony Martial in this FA Cup semi-final clash against Chelsea football club. The Nigeria International man, Odion Ighalo have helped Manchester united with more goals and assists especially when he start games, hopefully on Sunday will be another great day to for him remember. 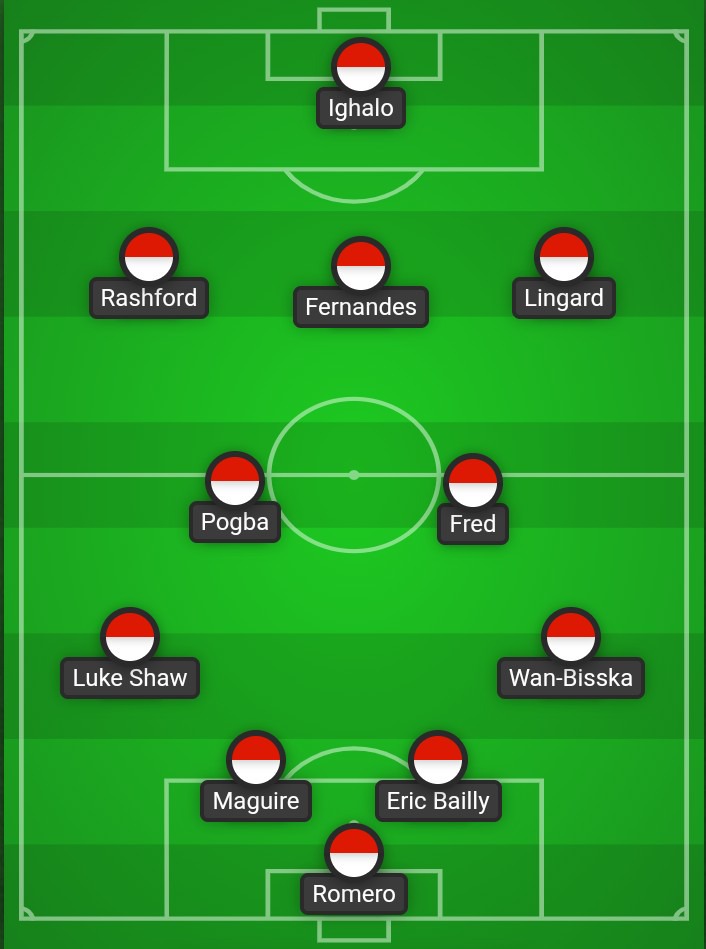