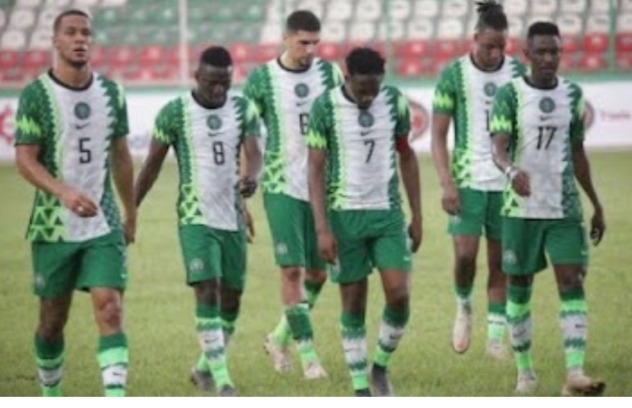 While the three-time African champions headed into the encounter largely unprepared and without a guide, their visitors had their tails up, perfectly executing.their match plan to the minutest details. The enterprising side secured their biggest win in history, giving them the bragging right heading into the reverse tie in Duoala, Cameroun on Sunday.

That epic fall had been a long time coming, considering recent dismal performances of the Super Eagles under Coach Gernot Rohr. They had put up unconvincing displays in the group's two opening fixtures despite beating Liberia and the Cape Verde Islands 2-0 and 2-1, giving Central African Republic the impetus to go for their scalp in front of their home fans.

While Thursday's embarrassing result is ready etched in history, Rohr and his charges are looking to make amends on Sunday, but here are reasons they may not emerge from Stade Barthélemy Boganda in Bangui unscathed.

Since taking charge in August 2016, Rohr has failed to carve out a playing pattern for the Super Eagles, leaving the team rudderless all of the time. His selection has remained as susceptible as his substitutions during games.

He didn't see the need to invite an attacking midfielder for the double header in the absence of injured Alex Iwobi and Oghenekaro Etebo. The resultant effect was that Victor Osimhen was denied clear-cut passes and had to do the playmaking most of the times, making the opposing defenders shine like diamonds as they effortlessly cleared loose aerial balls.

Taiwo Awoniyi, Kelechi Iheanacho and Osimhen are strikers, and playing two of them at the same time is inimical to the success of any team, but Rohr didn't see this.

Obviously, the confidence of Super Eagles has steadily diminished since Rohr took charge. Their inability to dominate lesser opponents has seen them lose confidence and taken for a ride. Algeria mauled Niger Republic 6-1 on Friday. That is what prominent teams do to minnows, but Rohr's sympathisers would argue there are no more minnows in football.

The Wild Beasts showed the Super Eagles no respect in Lagos and will certainly not do so in Duoala, having rolled over the supposed African giants in Lagos, where they showed great character by defendibg and attacking where and when it mattered, being the hallmark of a team with character.

Rohr play big names, irrespective of their fitness level and mental state, and even there are several other reasons not to. The Franco-German needs to be told how Clemens Westerhof benched foreign professionals for home based players like Thompson Oliha, Moses Kpakor and Ben Iroha while building a team that was ranked 5th in the world, won AFCON and reached the second round of the World Cup in 1994.

Great coaches are always ready to take risks, which explains why Westerhof chose to play Emmanuel Amuneke only in the final of 1994 AFCON, with the former Julius Berger winger clearly handing Nigeria the cup against Zambia in Tunisia.

During the first leg, Ola Aina had been left on the pitch despite proving every foot wrong. A sound coach would have pulled him out for either Kenneth Omeruo or Kevin Akpoguma. William Troost-Ekong and Leon Balogun went for the ball at the same time while desperately covering up for his lapses, leaving Karl Maxence Namnganda in a vantage position to deliver the killer blow on 90 minutes.

Under Rohr, the Super Eagles have seen some of their outings end futility like a park of wolves without an alpha.

Nigeria have always been blessed with leaders and playmakers, notable amongst whom are late Stephen Keshi, Christian Chukwu, Sunday Oliseh, Nwankwo Kanu and Austin Jay-Jay Okocha. Why Rohr and NFF scouts don't see the need for one leaves one at sea.

Inability to string up passes without losing the ball to opponents is a major stock in trade of the current Super Eagles team. The resultant effects are being unable to execute game plans, if any, and allowing opponents to grow into the game and execute their plans.

In the first leg, the Central African Republic team were clearly fitter than their Nigerian counterparts, certainly, a team of largely home based players could have done much better, if the Nigeria season was not off.

Before now, most Nigerians were contented with the team winning ugly, a mentality that has now become part of the fabric of the once revered Super Eagles.

Nigeria might edge their hosts on Sunday, but it must be a scrappy win, as the current team lack the capacity to give Nigerians the same level of enjoyment of the past.