When the ball hits the back of the net, sometimes it's easy to predict how a player celebrates. Some players have their trademark celebrations, while others just celebrate.

Here's a compilation of the 10 best celebrations in football history. 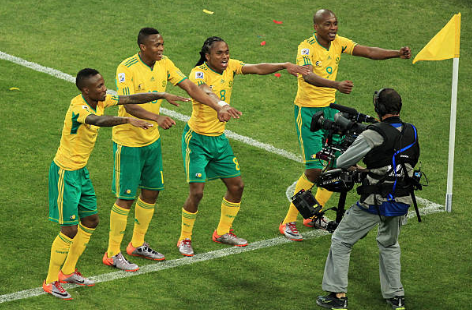 The 2010 World Cup was an event many Africans who witnessed it will never forget, as the world cup finally came to Africa for the first time. It would however be like poetry in motion, as the first goal of the tournament was scored by an African, Siphiwe Tshabalala - in the group stage opener between Mexico v South Africa - after he ran down the left-wing and fired an unstoppable rocket into the top right corner.

A bit unsure what the dance was, but it was fun to watch and remains a favorite for many African fans. 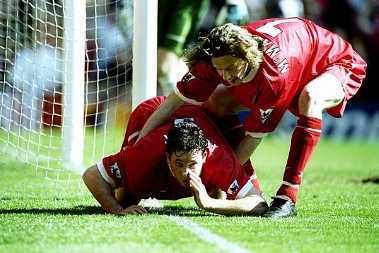 The Liverpool legend has also given fans an iconic celebration during his time, which came in the Merseyside derby. Following Evertonian chants saying he had partaken in recreational drug use, The former Liverpool striker celebrated, after converting a penalty during the derby match by pretending to snort cocaine up his nose from the Anfield touchline.

The celebration would however land him in trouble with FA, who hit Fowler was hit with a heavy fine and a four-game ban. But, what's a derby match without a bit of banter? 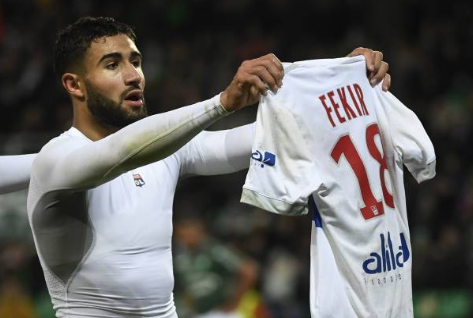 A game of football that turned into a violent clash, courtesy of a cheeky, yet iconic celebration by former Lyon favourite, Nabil Fekir. In a heated derby, Fekir was at his best, as he scored twice - his 11th and 12th goals of the season in Lyon's 5-0 win over Saint Etienne.

Fekir, after scoring took off his shirt and stretched it out towards the Saint Etienne fans - replicating Lionel Messi's trademark El Clasico celebration. His celebration led to play being suspended for 20 minutes as the Saint-Etienne fans raided the pitch. Riot police had to be called on to de-escalate the brawl before the players could return to the pitch and play out the final few minutes. 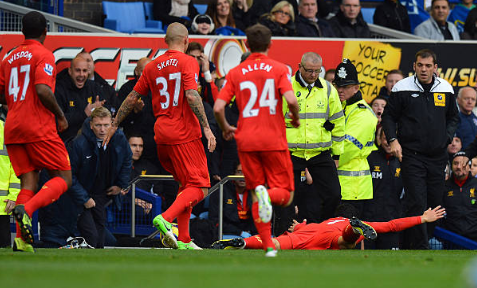 In a Merseyside derby, Suarez scored and provided one of the most hilarious, and iconic goal celebrations in recent times. After being criticized for his antics on the pitch by former Everton manager, David Moyes, who said: 'I would (be concerned about Suarez) because I think he has got history' when talking about the Uruguayan, it didn't seem to go down well with the Liverpool star man.

After finding the back of the net in the 14th minute, courtesy a deflected effort, which saw Liverpool take the lead, Suarez, smiling, ran towards the Everton boss, and jumped in front of him, seeming like a slide on his chest, in response to Moyes' remarks about his diving. 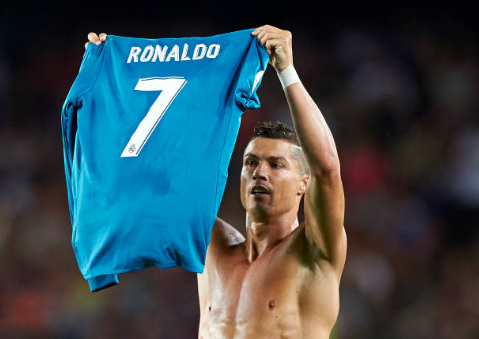 The five-time Balon D'or winner had to respond to Messi's celebration at the Santiago Bernabeu the past season when he scored a last-minute winner.

This time, they met in the Spanish Super Cup at the Camp Nou. Ronaldo, coming on as a second-half substitute and scoring, to make it 2-1 for Real Madrid. Just like Messi, he took off his shirt, and stretched it towards the Barcelona fans, Although Ronaldo got sent off a few minutes later, Real Madrid won the game 3-1, and his celebration, just like revenge, was interesting to watch, and ice cold. 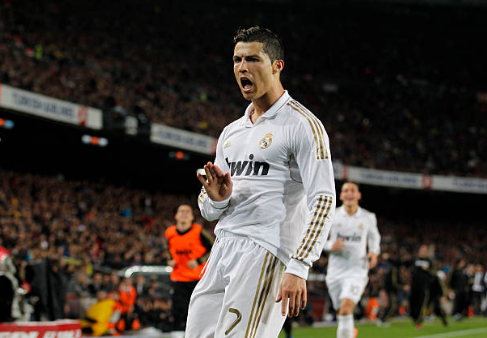 The Italian, whose time in England was mixed with both great and not so great moments, provided an iconic celebration when Manchester City decimated Manchester United by 6-1 at Old Trafford. 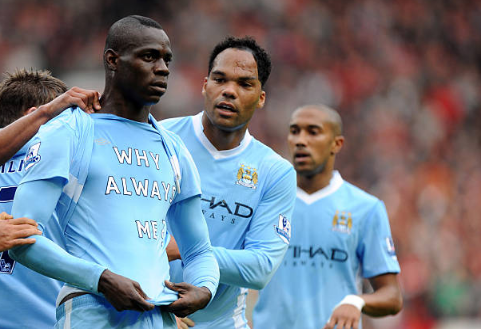 After finding the back of the net, the Italian striker pulled his shirt over his head and showed what was printed on his inner shirt - “WHY ALWAYS ME?”, probably asking why he was always in the media. To be fair, he was a really controversial player during his time at Manchester City, but his celebration remains iconic. 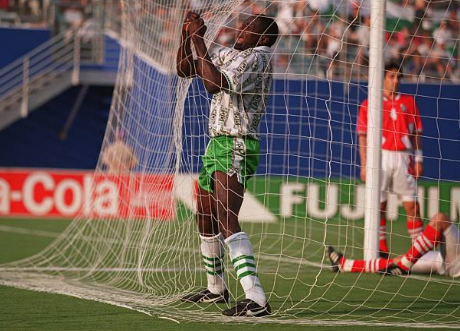 It was Nigeria's first world cup in its history and it proved to be an iconic one, as the team made it to the second round.

One of the reasons it would be remembered was the celebration by one of Nigeria's greatest strikers, Rashidi Yekini who after scoring, probably didn't know what to do, and ended up grabbing the net and shaking it, while in what seemed to be tears. Nigeria's first world cup appearance, and goal - a huge feat, and what a way to celebrate it. 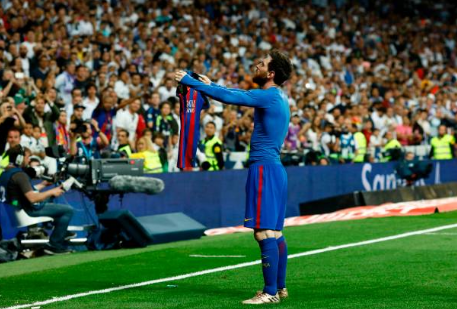 An El Clasico match that had everything - a red card, goals, and an iconic celebration from six-time Balon d'Or winner, Lionel Messi. After Sergio Ramos had been sent off, and the game was 2-2 after James Rodriguez had pulled Real Madrid level, the phenomenal Messi stood up to put the game past Real Madrid by scoring the winner late in the match after hitting the ball past Keylor Navas, to score what proved to be the winner.

To celebrate the goal, Messi took of his shirt and showed the part where his name was to the Madrid fans - a celebration that would be used by the La Liga during adverts years later. 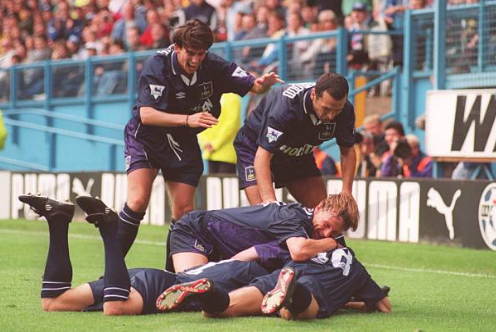 Jürgen Klinsmann's move to Tottenham was one that was filled with two major things - a lethal goal-scoring touch, and diving.  On his debut for Spurs in an away match at Sheffield Wednesday, the home fans taunted Klinsmann by holding up cards that had diving scores on them.

It would only prove to inspire the German, as he headed home his goal for Spurs, Klinsmann then chose to celebrate in response to what the fans had been doing by diving in front of them. 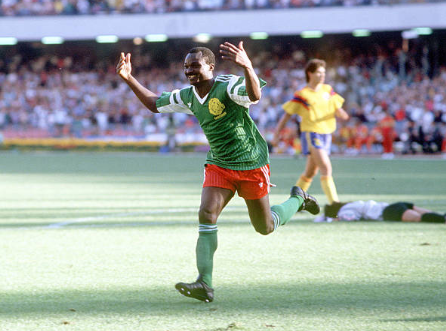 Roger Milla remains and African football legend, due to his exploits at the African Nations, and more importantly, the World Cup.

After scoring his first goal at the 1990 world cup, he would go on to deliver an iconic celebration, which many remember till now, and still highlight - he ran to the corner flag and danced around the corner flag in an entertaining manner which thrilled fans around the world. 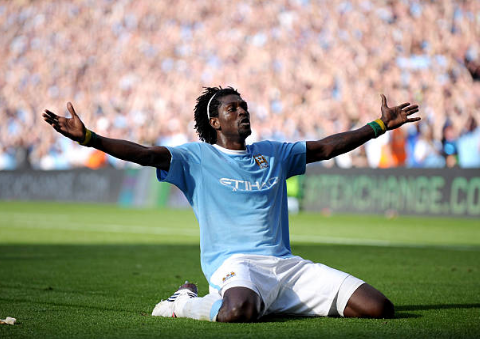 Sometimes, scoring against your former club can be too much to take in, and a lot of players tend not to celebrate. This was not the case for former Togolese captain, Emmanuel Adebayor, who after scoring for his new club, Manchester City, ran the full length of the pitch to celebrate in front of the Arsenal fans, who had been jeering him during the match.

Adebayor didn't go scot-free, as he was fined and banned for a number of matches by the FA. These are some of the best celebrations in football history, is any missing? leave your thoughts in the comments.

These are the top 10 celebrations in football history, is any missing? leave your thoughts in the comments.