Reasons why Ronaldo posses a massive Aerial Ability.His Nike football boot is one of them.

By Emediongsilver (self media writer) | 1 year ago 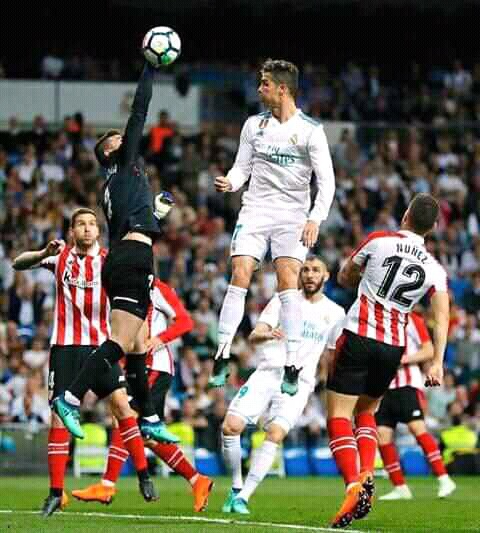 Dos Santos Alveiro,Unarguably one the greatest of all time,to some he is the greatest. Former Manchester United and Real Madrid star Ronaldo remains the

having scored 84 times in 196 appearances. He is the also the leading Portuguese scorer in La Liga history having registered 311 goals in 292 appearances for Real Madrid, where he is the all- time leading scorer. What is unique about him is his jumping abilities. Photographs of the goal, which levelled the Champions

Ronaldo's knee at the same height as Patrice Evra's head as he made contact with the ball.

It was yet another example of this extraordinary attribute

to his game, something which is unique among the world's top players.

player, just one facet of an incredible athlete.

When Ronaldo jumps, he generates 5G of G-force on take-off - this is five times the power of a cheetah in full flight. That's the story of a hardworking superstar who wants to do everything perfect for himself. One secret that doesn't really draw attention is what he wears on his feet. The highly Rated Nike boot Ronaldo signed a lifetime contract with Nike in 2016, only the third athlete, and first footballer, after LeBron James and Michael Jordan to do so.

He has been sponsored by Nike since 2003 and thanks to this deal, that will continue even when he retires. The lifetime endorsement is worth around £781million

According to some the reasons he jumps so high is because his feet is used to what he wears.

November 2011, Nike unveiled one of the most unique Football Boots ever, the Nike Cristiano Ronaldo Vapor Superfly III Boot. The stunning cleat came with a mirrored design, which created a special look.