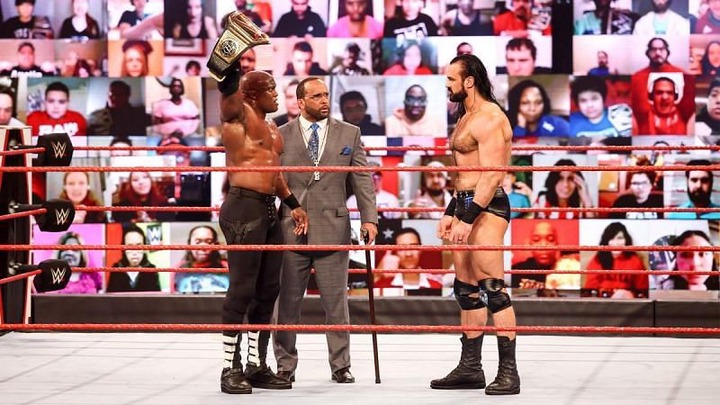 Bobby Lashley will put his WWE Championship on the line at WrestleMania against Drew McIntyre. Since winning the title from The Miz, Lashley has been on a rampage and almost seems unstoppable.

If there's anybody on the RAW roster who could push Lashley to his limits, it is the former WWE Champion Drew McIntyre. The Dominator is surely not taking The Scottish Warrior lightly and has already enlisted some new help on Monday Night RAW.

Lashley made it clear that anyone who takes out McIntyre before WrestleMania will get a chance at his title.

"You all want a chance to shine? Here it is on a silver freaking platter! GO GET HIM!  #WWERAW"

Bobby Lashley decided to present this unique opportunity to the likes of Drew Gulak, Akira Tozawa, Ricochet, Gran Metalik, and Lince Dorado. Perhaps one of them will use this chance to shine.After his Hurt Business subordinates Cedric Alexander and Shelton Benjamin failed to knock off McIntyre in a 2-on-1 Handicap match, Lashley has looked to some of RAW's more underused Superstars for help.

The All-Mighty will be at a bit of a disadvantage come WrestleMania 37. Lashley will not have his Hurt Business lackeys Cedric Alexander and Shelton Benjamin at ringside.

The former RAW Tag Team Champions challenged McIntyre in the hope of redeeming themselves in the eyes of Lashley. However, the Scottish Warrior only agreed to the match if a stipulation was involved.

The stipulation was that if McIntyre were to win, then the two would be banned from ringside at WrestleMania, and of course, he emerged victorious.