OPINION: Why Chelsea should sign and make Emiliano Martinez their number one goalkeeper

By SportsBible (self media writer) | 3 months ago 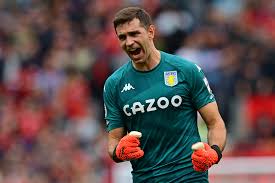 There is no doubt now that Arsenal made a mistake when they sold Emiliano Martinez to Aston Villa as his reputation has grown tremendously since then. According to Squakwa Football, the Argentine goalkeeper has so far made more saves in the Premier League in 2021 than any other goalkeeper. WhoScored.com also revealed his WhoScored rating which was 6.98 was the highest in Europe's top 5 leagues in 2021.

Those fine performances didn't go unnoticed as he has been nominated for the 2021 Yashin award. Given that kind of form, it won't be long before the big clubs come calling. For me, it had better be Chelsea as Martinez possesses the best qualities of Edouard Mendy and Kepa Arrizabalaga. His will be an upgrade to their goalkeeping position if he is signed.

In the World Cup qualifications match between Argentina and Peru, Martinez was in between the post for his national team when Peru's Yoshimar Yotun missed a penalty that would have leveled the scoreline in the early hours of Friday. Argentina won that match 1-0 to extend their lead over Ecuador to 8 points.

That is just one out of several penalties that he has either saved or has been missed when he is standing between the post in 2021. This year has been his best but he is not a one-season wonder. He also performed well in 2020 when Arsenal finally gave him the chance to show what he could do.

Mendy is currently the first-choice at Chelsea but he is not trusted when it comes to saving penalties. Kepa on the other hand is trusted in penalty situations but he is not a good shot-stopper. For me, Martinez's ability to stop shots and penalties makes him a better goalkeeper than Mendy and Kepa. He possesses the best qualities of both goalkeepers.

Thomas Tuchel has been clever, he knows the strengths and weaknesses of both goalkeepers and selects them based on what the situation demands. However, that may not last much longer as METRO SPORT reported that Lazio is interested in signing Chelsea's Spanish goalkeeper.

There is also the issue of Mendy not being available in January due to his potential involvement in the African Cup of Nations. In that time, Chelsea will be playing Liverpool, Manchester City and Tottenham. With Kepa in goal in all those matches, they might as well forget about their dreams of winning the league title.

There is no doubt that Martinez will provide better competition for Mendy if he is signed. He won't be too expensive given he is 29 years old, the same age as Mendy.