Three Nigerian players in the shape of Hamilton Academical's Hakeem Odoffin, Queens Park Rangers Bright-Osayi-Samuel and Augsburg's Felix Uduokhai have been named to Whoscored.com's Team of the Week in their respective leagues. 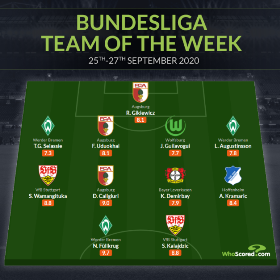 Filling in at center back, Odoffin scored his third goal in five matches as Hamilton Accies were held to a 1-1 draw by Dundee United in the Scottish Premiership on Saturday, September 26.

The former Wolverhampton Wanderers youth-teamer won a team-high seven aerial duels vs Dundee United, racked up a game-high five interceptions and led the team in clearances with five.

Osayi-Samuel was named in the EFL Championship Team of the Week for his performance in Saturday's draw with Middlesbrough.

Twenty-eight minutes into the game, the Nigerian-born winger cancelled out Chuba Akpom's opener.

Osayi-Samuel occupied the left side of attack in the Team of the Week.

Center back Felix Uduokhai has been recognized for his performance at the WWK ARENA, where he helped Augsburg defeat Borussia Dortmund 2-0.

The Nigeria Football Federation target opened the scoring in the 40th minute, his first goal for the Fuggerstädter.

Content created and supplied by: Ladi69 (via Opera News )