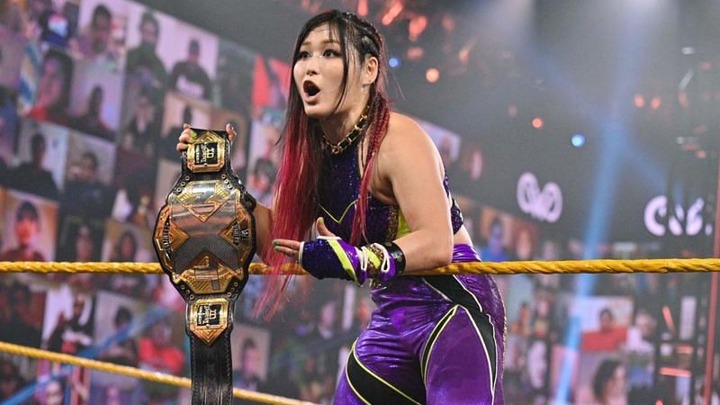 Io Shirai has maintained a vice-like grip on the NXT Women's Championship since winning it in June 2020. Her title reign is edging close to the 300-day mark, and all roads lead to a big championship match at the upcoming TakeOver event.

The Japanese Superstar is expected to defend the NXT Women's Championship against Raquel Gonzalez at TakeOver: Stand & Deliver, during the WrestleMania 37 weekend. Based on the latest backstage reports, a title change is a strong possibility.

On the latest Wrestling Observer Live, Bryan Alvarez reported that WWE had chalked up plans months ago to make Raquel Gonzalez the next NXT Women's Champion. Plans frequently change in NXT, and while Alvarez doesn't know the current direction, "Big Mami Cool" was earmarked for a championship push.

"I don't know who's gonna win the title, and plans change all the time in NXT. I heard months ago that Raquel is probably the one who is going to beat Io Shirai."

According to a WrestlingNews.co report, Raquel Gonzalez is well-liked backstage. NXT officials are impressed with her overall development as a performer, and a title push seems a fitting reward.

The report also revealed that NXT announcers had been told to focus on Io Shirai's impressive championship streak. WWE will ideally play up Io Shirai's dominance as the champion during the program with Raquel Gonzalez, which could make the potential title change even more meaningful.

Gonzalez has been well-protected as a character since she made her NXT debut in February 2020. Her alliance with Dakota Kai furthered her progression as a WWE Superstar. Gonzalez's in-ring and microphone skills have improved tremendously, and the NXT management feels that the 30-year-old Superstar is ready for the next level.

WWE crowned Raquel Gonzalez and Dakota Kai as the inaugural NXT Women's Tag Team Champions on the most recent NXT episode. Unfortunately for the duo, a massive swerve also led to Ember Moon and Shotzi Blackheart winning the titles from them by the end of the show.

In doing so, WWE has cleared the path for a marquee NXT Women's Championship match between Io Shirai and Raquel Gonzalez. The massive showdown should be one of the featured bouts of the two-night TakeOver in April.