205 Live has quite a few up-and-comers making their name on Friday nights. We've seen folks like Mansoor, Ever-Rise, Isaiah "Swerve" Scott, Tehuti Miles make the most out of 2020, along with the dominant debut of Legado Del Fantasma.

Speaking of Isaiah Scott, he and Tony Nese have been involved in an...odd...angle as of late. At first, Nese hated Scott, but over the course of the months, he apparently earned the Premier Athlete's respect. Now they're, somehow, in the midst of a feud with 205 Live's newest tag team, Ever-Rise. In the main event, Nese would take on Chase Parker.

The first match on 205 Live, though, was a rematch from last week. Mansoor talked a lot of trash earlier today. After defeating Tehuti Miles on 205 Live seven days ago, he was feeling quite arrogant.

He said that he hadn't lost since September (though he admitted that he'd rarely wrestled since then) and needed to know the bitter taste of loss. Would he get what he wanted from Tehuti Miles? We find out right now!

Tehuti Miles vs Mansoor on 205 Live

Tehuti Miles threw his jacket at Mansoor as the bell rang, allowing him to get an early edge. He tossed Mansoor around the ring a bit, but his mouth got him in trouble, allowing Mansoor to get back into things with a back body drop.

A suplex earned Mansoor a two-count. Mansoor moved in for a springboard maneuver, but Miles caught him in mid-air with an incredibly high dropkick, sending his opponent crashing and burning to the floor.

Miles bounced Mansoor's face off the plexiglass. A hangman's neckbreaker dropped Mansoor for a near fall. Mansoor was planted with a big flapjack facebuster, but again kicked out.

Mansoor found himself on the apron once again and baited Tehuti Miles into going for that dropkick. It worked, allowing him to connect with that slingshot corkscrew neckbreaker. Mansoor lit up Miles with a series of strikes, building up momentum to another victory on 205 Live.

An inverted atomic drop into a spinebuster set Mansoor up to hit Miles with his Electric Chair Death Valley Driver, planting Miles firmly in the middle of the ring. 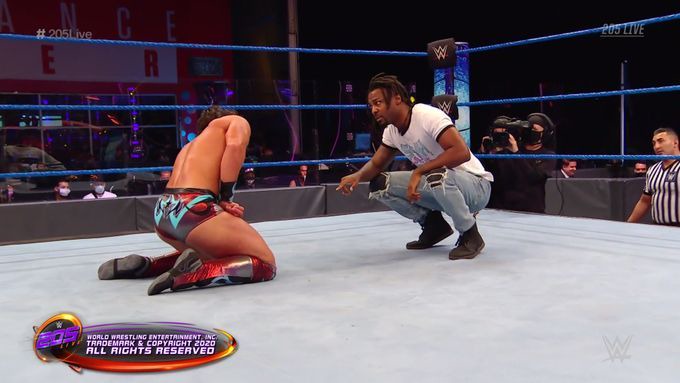 We get a replay of the Legado del Fantasma vignette from NXT on 205 Live. Santos Escobar, Raul Mendoza, and Joaquin Wilde bragged about their six-man victory over Drake Maverick and Breezango at NXT Great American Bash. The Cruiserweight Champion and his cronies look to continue to dominate the division, both on the Black and Gold brand and 205 Live.

Tony Nese outclassed Chase Parker, quickly wrapping him up with a modified abdominal stretch, leading to a pinfall attempt. An arm drag took Parker down, and he responded by shoving the Premier Athlete to the corner. Nese shoved back, sending Parker onto his backside.

Nese connected with his patented striking combination, earning a two-count. Parker was hung up on the ropes, and moved in for the triangle moonsault follow up. Matt Martell distracted him, though, allowing Parker to dive through the ropes for a dropkick.

Inside the ring, Parker focused on Nese's arm. The 205 Live veteran was planted with a running bulldog before Parker went back to the arm. Nese broke out of a Fujiwara armbar and took his opponent to the corner.

A second bulldog from Parker was blocked. Nese landed a boot and a kneeling facebuster. A running boot and spinning heel kick left Parker dazed. Following a chop block to the front of the legs, Nese hit the triangle moonsault for a nearfall.

Nese knocked off Parker after a devastating spinning back kick, earning a dominant victory over one-half of Ever-Rise.

After the match, Ever-Rise attacked Nese. However, Isaiah "Swerve" Scott made the save, preventing Ever-Rise from hitting their finish.