By Jesusloves (self media writer) | 2 years ago 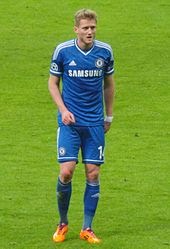 The former world cup winner and Ex Chelsea Attacker, Andre Schurrle through their official website of Chelsea has confirmed the retirement of Andre from the professional football at the age of 29 years old. He left the Blues due to food poisoning in Poland in October 2014.

He also confirmed quitting football after injury he sustained while playing matches in his current team and the decision to quit has been with him for a longer time.

He also wrote through his Instagram picture where he was lifting up the world cup with Germany in 2014 , that he want to let everybody know that he is stepping away from playing professional football .He thanked everyone for their love and support they shared with him.

The ex club ,Chelsea through their official twitter handler wrote to him(Andre Schurrle) " Enjoy your retirement ". Andre Schurrle has made 33 Bundesliga appearances across two seasons for the club before spending campaign on loan at Fulham and Spartak Moscow. His last international match for Germany was in March 2017 playing in a 4-1 victory against Ajezbaijan in qualification for the 2018 world cup.

We wish a happy retirement and faster recovery from those injury sustained while playing football games.

Content created and supplied by: Jesusloves (via Opera News )