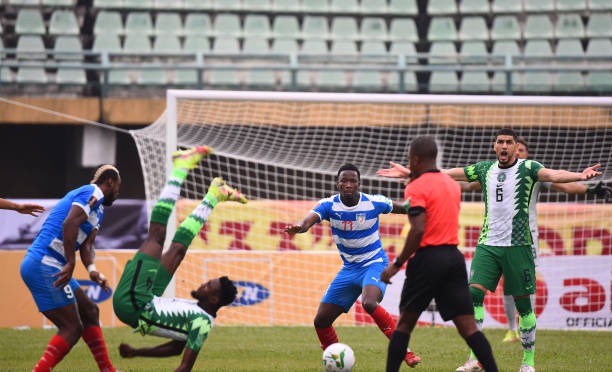 The CAF qualifying tournament for the FIFA World Cup Qatar 2022 resumes, with matchday three taking place across the continent between 6 and 9 October 2021.

Guinea will open the matchday three qualifiers against Sudan on neutral ground at the Grand Stade Marrakech, Morocco on October 6 in one of the group I contests. While Morocco will slot it out with Guinea Bissau at Complexe Prince Moulay Abdellah, Rabat in the other group game on the same day.

The Super Eagles of Nigeria who tops group C with 6 points after matchday two will take on the Central African Republic in one of the group c encounters at the Teslim Balogun Stadium, Lagos on October 7. While in the other group game Liberia will play Cape Verde on neutral ground at the Accra sports stadium, Accra, Ghana on the same day.

In group J, DR Congo will battle Madagascar on October 7 at the Martyrs Stadium, Kinshasa while Tanzania will play at home to visiting Benin at the Benjamin Mkapa stadium, Dares Salaam.

At Estadio de Malabo, Malabo, Equatorial Guinea will file out against visiting Zambia on October 7 in one of the group B encounters while in the other group game to be played also on the same day will see Tunisia takes on Mauritania at Stade Olympique, Rades.

The Grand Stade-Agadir will host the match of the Group E encounter between Mali and Kenya on October 7 while Rwanda will play hosts to visiting Uganda at Stade Reginal de Nyamirambu, Kigali on the same day.

The Ivorian on October 8 will tackle Malawi on neutral ground at the Orlando Stadium Johannesburg, South Africa in one of the group D encounters while at Stade Omnisport de Bapanda, Douala Cameroon will tackle Mozambique in the other group game on the same day.

Angola will play at home against visiting Gabon in one of the group F contests at Estadio 11 Novembro, Luanda on October 8 while Egypt will battle Libya in the other Group F contest at the Borge El Arab stadium, Alexander.

In group A, Algeria will play hosts to Niger at the Mustapha Tchaker stadium, Blida on October 8 while Burkina Faso will take on Djibouti at Grand Stade Marrakech, Morocco also on the same day.

At the New Cape Coast stadium, Cape Coast on October 9, Ghana will play hosts to visiting Zimbabwe in one of the group G encounters while South Africa will travel to Bahir Dar where they will take on hosts, Ethiopia at the Bahir Dar Stadium in the other group game.

In group H, Togo will play at home to visiting Congo at Stade de Kegue, Lome on October 9 while Senegal will file out against Namibia at the Stade Lat Dior, Thies also on the same day. 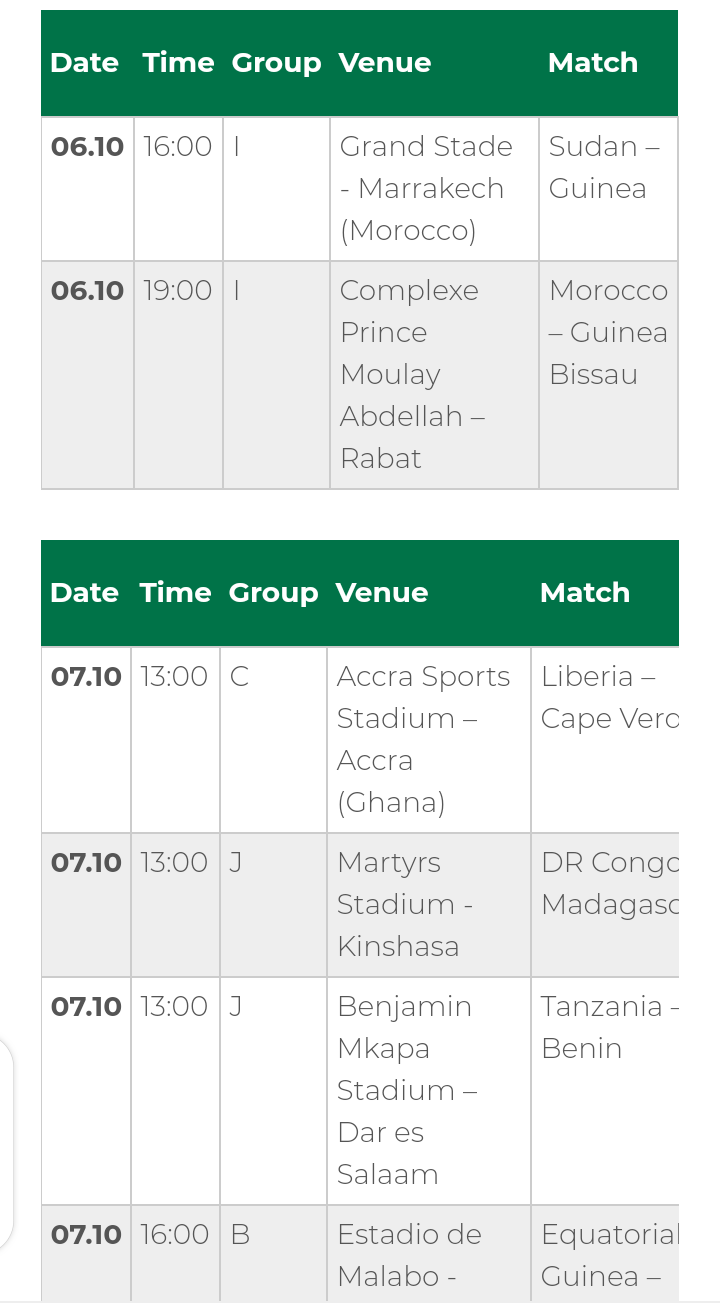 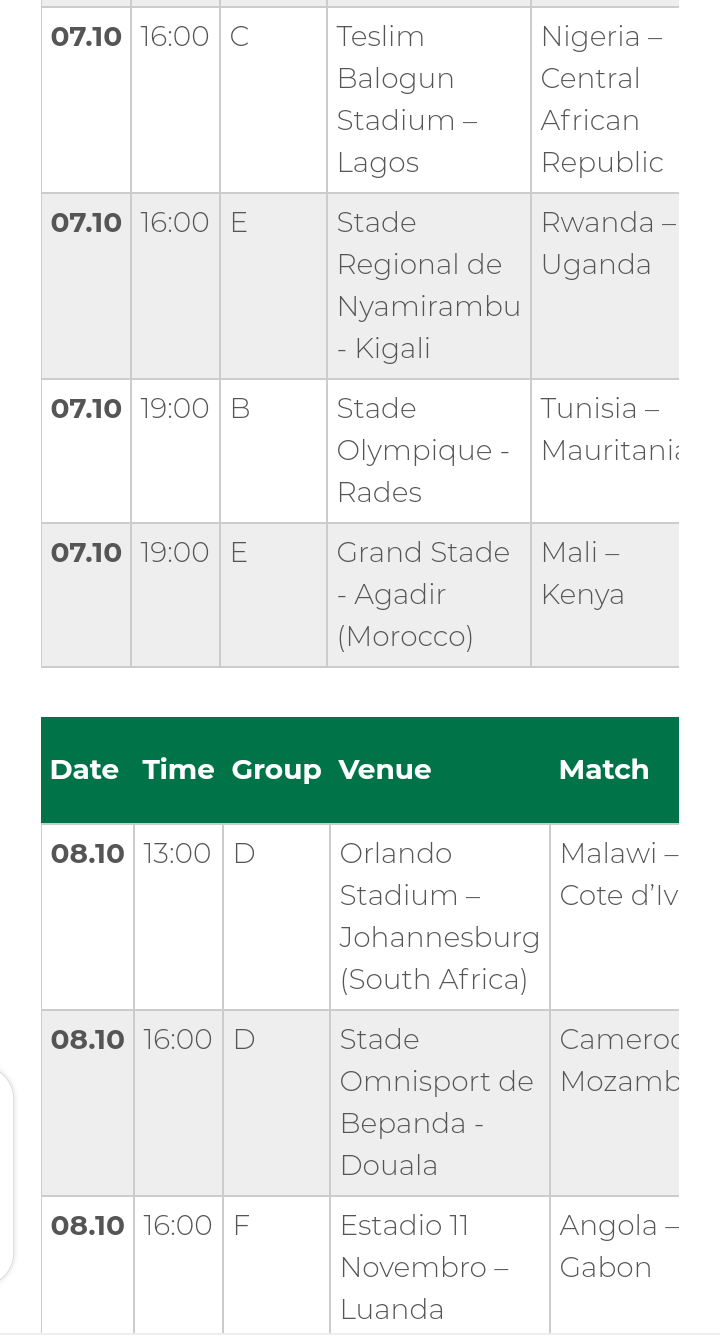 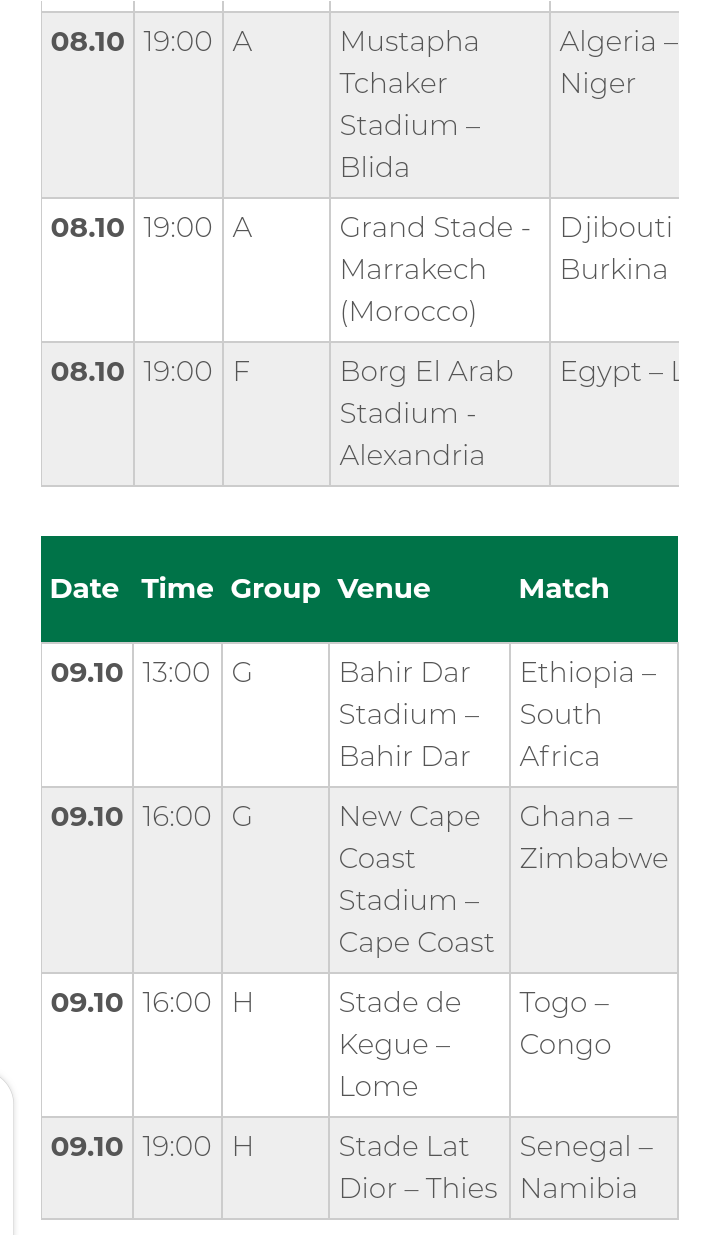