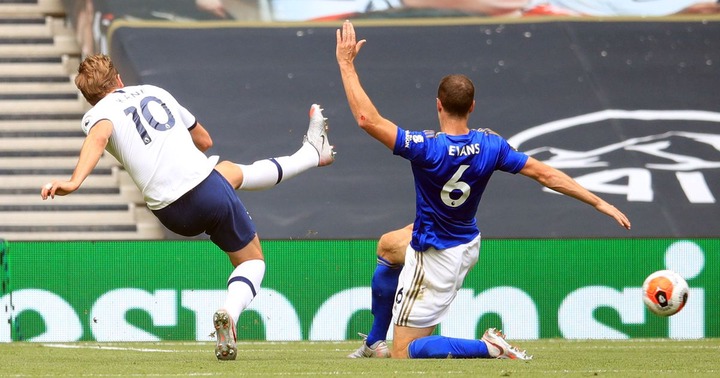 Tottenham Hotspur cruise past shambolic Leicester City 3-0, to record consecutive victories for the first time since the restart of the English Premier League, since it went on hiatus due to the outbreak of the COVID-19 pandemic in March.

The defeat for Leicester City means their chances of making the UEFA Champions League next season has been narrowed. Leaving them with just a game left, against fellow Champions league spot rivals, Manchester United, who still have two games left.

Manchester United are level on point with the Foxes, a victory for them in their next game against West Ham United will take them 3 points ahead. Leicester conceding 3 unreplied goals against Tottenham reduced their goal-difference to 28, equal with Manchester United. Son Heung Min opened the scoring early into the game, after his deflected shot went straight into the back of the post, leaving Kasper Schmeichel helpless. The Foxes kept on pressing for an equalizer, without real chance on-goal.

Ayoze Perez had half-a-chance, after a lovely solo-run and sublime footworks to get past 3 Spurs players, before his eventual shot was blocked by a Spurs defender. Hugo Iloris produced a mind-blowing save.

Two quickfire first-half goals from Harry Kane, complicated matters for Leicester City, who were sharpless in the second-half of the game, with pure tactical brilliance from manager Jose Mourinho to restrict the Foxes to spend more time in the middle of the park. The Foxes for most part of the second-half tossed the ball around without penetration. Leicester City had 61% of the possession to Spurs 39% with just 20 mins into the game, but they were unable to convert their dominance to goals.

Brendan Rodgers brought in Nigerian attacker Kelechi Iheanacho in the second-half of the game to help rescue the Foxes, but it was a task that proved to be difficult for the entire team.

The win meant a whole lot for Tottenham Hotspur Europa League ambition, as it takes them to 6th on the log, usurping Wolverhampton Wanderers to that position.

The English Premier League title race may have been decided, but the top four race is undecided, as it seems to be another title race for Leicester City, Manchester United and Chelsea.