Madrid Is The Most Successful Club To Have Participated In The UEFA Game Winning It 13 Times.

By Sir_Fel (self media writer) | 2 years ago

The UEFA Champions League is an annual club football competition organised by the Union of European Football Associations and contested by top-division European clubs, deciding the competition winners through a group and knockout format.

The game starts with 32 football teams competing in the group stage, up until the finals.

The club Real Madrid, Founded on 6 March 1902 as Madrid Football Club, the club has traditionally worn a white home kit since inception. The word real is Spanish for "royal" and was bestowed to the club by King Alfonso XIII in 1920 together with the royal crown in the emblem. The team has played its home matches in the 81,044- capacity stadium named Santiago Bernabéu Stadium. 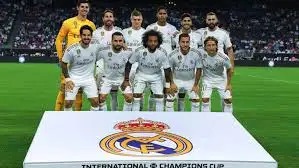 Real Madrid is the only club to have participated and have won the UEFA championship trophy 13 Times in total.

Although it is quite sad and challenging that this great team have already be kicked out in this year UEFA championship game and hence cannot make it to the finals along side the 8 remaining teams currently contesting in the quarter finals.

Content created and supplied by: Sir_Fel (via Opera News )