Two Nigerian midfielders in Spain are confronting different shades of destiny ahead of next season, as Getafe star, Oghenekaro Etebo could be heading back to England, while UD Huesca youngster, Kelechi Nwakali is earnestly hoping on gaining promotion to the top-flight division. 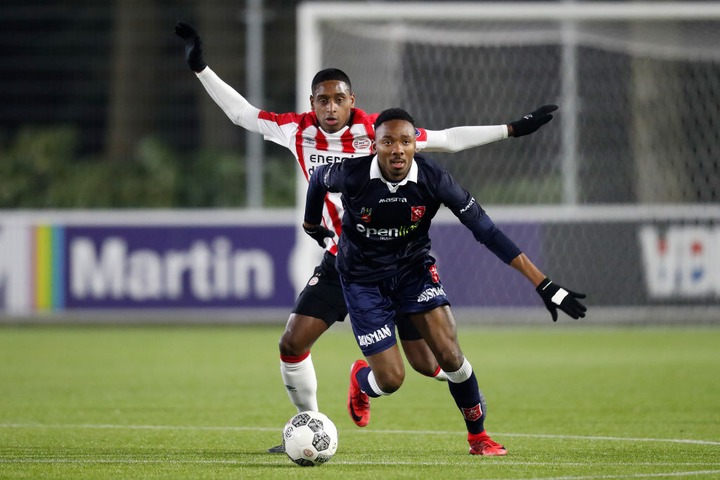 While Getafe are bound to lose the services of Etebo this summer, as the battling midfielder is set to return to his parent club, Stoke City of England, at the end of his current loan deal, Nwakali is gunning for elevation into the Spanish LaLiga with Huesca.

The shade of varying fortunes means Nwakali could become Nigeria’s next player in the Spanish upper echelon, but Etebo appears to be on his way out, as Stoke have added his name to their roster of retained players for next season in the English Championship. 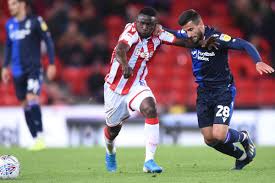 That signals an impending return to The Potters for the 24-year-old Etebo, who has missed the last three games for Getafe in LaLiga due to a nagging injury, hence his inability to showcase himself against Real Madrid, Osasuna and Villarreal.

It might mean no further match for Getafe by Etebo, who is spending the second half of the outgoing season back in Spain, where he previously played on loan from UD Feirense of Portugal at Las Palmas. 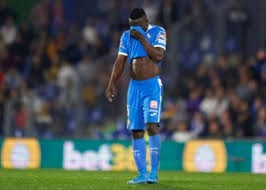 His stock rose to an all-time high after he shot to limelight with Warri Wolves of Delta State and was part of Nigeria’s bronze medal-winning under-23 at Rio 2016 Olympic Games in Brazil; but many observers believe he signed for Stoke quite hastily, as the deal was sealed only few weeks before he starred for Nigeria at Russia 2018 World Cup and he had a tremendous outing.

Getafe, though, still hold an option to make Etebo's loan move permanent at the end of this season, having earlier considered triggering a purchase clause in his deal before the coronavirus pandemic; but Stoke appear to be in need of the dark-skinned midfielder, who found game time hard to get in the first half of the season in England, with only eight starts from a possible 26.

The stocky midfielder was brought in on a temporary deal in January by the Spanish LaLiga side, as they aimed to pick the UEFA Europa League title and snatch a top-four finish in the domestic championship.

It is, however, already turning into a huge dilemma of sort for Etebo, as he did not have the best of time at Stoke in the first part of this season, while his days at Getafe were not so comfortable as well from the onset, in terms of cordial relations with his teammates and settling down in the city. Such it was that Getafe's coach, Jose Bordalas at a point expressed concerns that Etebo was in a very uncomfortable and bored situation living on his own during the coronavirus lockdown, as the Eagles’ enforce was not with his family and friends when Spanish football was suspended.

Having endured a difficult time at Stoke, things eventually looked to be getting better for the 24-year-old Etebo, as he got his first goal in LaLiga and showed tremendous form in Getafe’s victory over Real Mallorca and a draw with Celta Vigo in the first week of March, only for issues to take another tumble into gloom when COVID-19 set in and halted the season on the 12th. 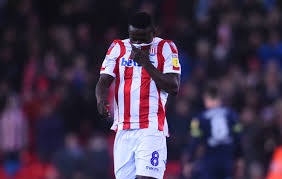 Many players were able to return to their homes and reunite with loved ones just before the thick of lockdown, but Etebo was caught in it and held back in Spain, staying all alone, much to the worry of Bordalas, as the coach expressed empathy with his Nigerian ace, who he feared had no one to keep him company.

“He could not go home, and he is alone,” the Azulónes team’s coach lamented back then in a chat with RTVE, which appeared to pain a sordid picture for Etebo and reason for him to want out, especially as the lack of activity apparently caused muscle cramps that led to his current battle with injury, but he is still undecided on whether to stay put in Spain or return to Stoke. On the other hand, former Arsenal of England fringe player, Kelechi Nwakali is making the best of his time playing in Spain’s lower division with Huesca, with which he is eyeing promotion back to the upper echelon in the next few days.

Incidentally, it was in England that the 22-year-old Nwakali failed to succeed with Arsenal, as the lad with a single cap for Nigeria’s senior B-squad never played any competitive match for The Gunners, who instead gave him several loan spells away from Emirates Stadium. 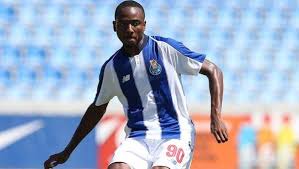 At the highs of the lad’s situation, a concerned writer named Toby Prince wrote on September 6, 2019: "Stardom was envisaged following a switch to Arsenal in 2016. Hailed for his languid style that belies his endeavour and ability, Nwakali is the archetypical deep-playing midfielder.

“Not one to typically jump into tackles, he trails the play with an ability to beat a player and release the ball quickly, opening up space for his fellow attackers. The Nigerian didn't flaunt these qualities at the Emirates. 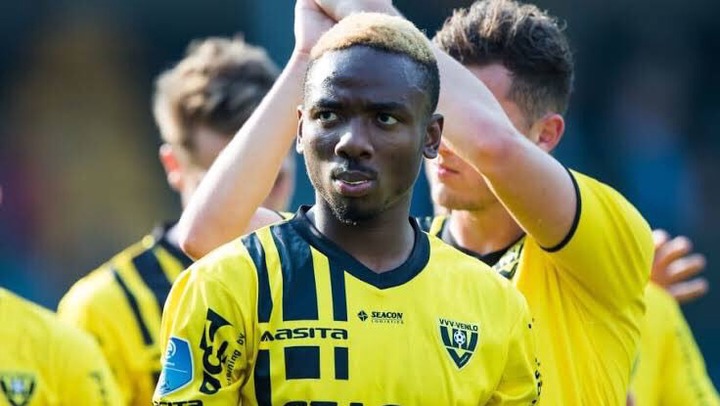 “Work permit issues forced him away on loan four times - most recent at FC Porto B, racking up 16 appearances. Beyond the regulations, though, Nwakali didn't quite live up to the hype. The Gunners didn’t think twice to bundle him away to Spanish second-tier side SD Huesca three years into his five-year deal."

While his struggles lasted at Arsenal, Nwakali went on spend time twice at MVV Maastricht of Holland and once with their Dutch Eredivisie rivals, VV Van Venlo, as well as a short spell with FC Porto of Portugal, from where he moved to Huesca. 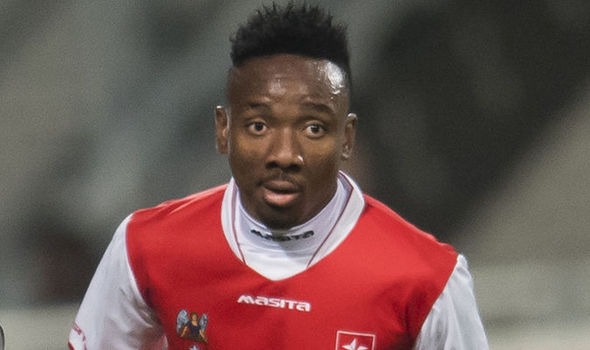 It surely has been a tipsy-turvy amble for the Cupid-faced lad, who also captained Nigeria’s yunder-20 and under-23 national teams, but he is now thinking of finally hitting the big time by getting to play in LaLiga; as the Diamond Football Academy of Umuahia product aims to finally come of age and get the desired status his talent deserves at club level.

With promotion high on his mind, the Golden Eaglets' winning captain at Chile 2015 FIFA U-17 World Cup has urged his teammates not to relent in their quest for a return to LaLiga and declared that they must bounce back from their 1-0 loss away to Racing Santander on Saturday. During that game, Nwakali got off Huesca’s bench in the last 20 minutes and, although he could not save his team from losing, he declared emphatically afterwards that he and his pals have to forget the setback and shift focus to their next two games to confirm their promotion target.

Huesca are currently second on the log of Segunda Liga with 64 points, two ahead of third-placed Real Zaragoza, who dropped down the table following an abysmal return of six defeats in their last nine games. 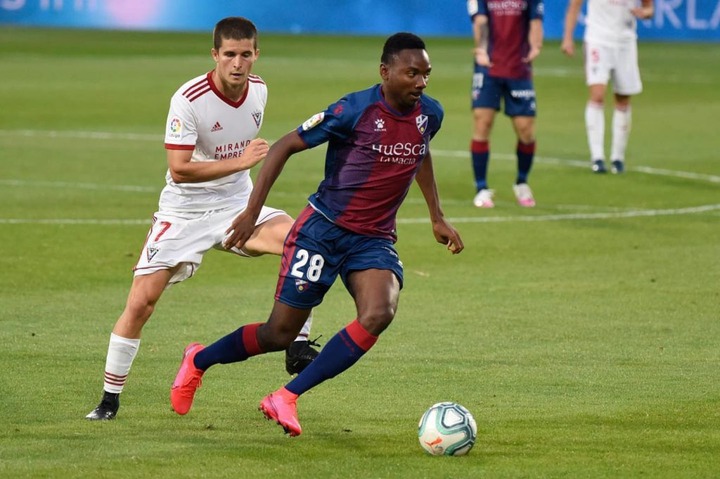 First and second positions on the log automatically gain promotion to the elite division, while the third to sixth placed teams will go for a promotion play-off, from which the winner will join the other two in LaLiga next season.

Nwakali and his teammates will need to make the most of their home clash against Numancia on Friday before their final game of the season two days later away at Sporting Gijon; ahead of which the youngster declared: “Two games to LaLiga, eyes on the price, come on HUESCA.”