Man Staggered by Strange Sight under his Basement Stairs

A new homeowner had only just moved into his house when he began to explore his basement. While looking down the staircase, he noticed something unusual between the wall and the stairs.

It was a strangely out-of-place piece of plywood that looked as though it was being used to cover up something on the other side. The man slowly approached the wood to get a better look.

He grabbed hold of the corner of the wood and shifted it slightly. That's when he noticed a strange gap between the wood and the wall. Hmm, there was something behind this wall the previous owner wanted hidden...

With a few tugs on the corner of the board, he pried it out from behind the staircase — and stared in awe at the startling discovery. There was an entire room down there no one had bothered to tell him about! 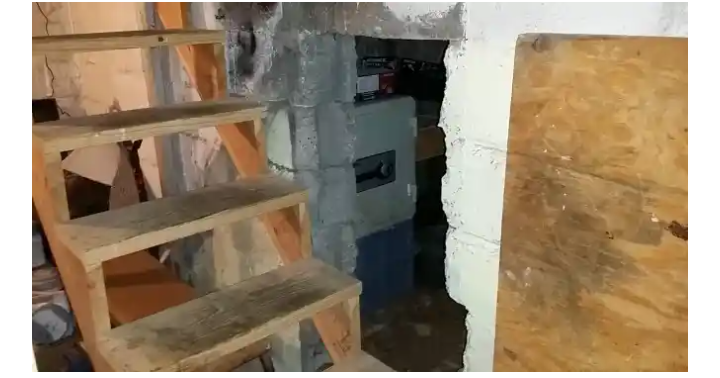 The room was stocked with supplies. Inside were dozens of boxes and a locked safe. First, he fiddled with the safe but couldn't open it. He moved his attention to the stacks of boxes.

After inspecting the outside of the containers for a few moments, he realized the boxes weren't just any old useless cardboard boxes. These were gun boxes — and there were lots and lots of them.

That's when he noticed the ammo boxes! He opened them up, and sure enough, they were filled with live rounds. A picture of the former homeowner started forming in his head.

Because the presence of the bullets begged one important question: what exactly was the previous owner preparing for? And why did they leave everything there like they were forced out of the home without time to collect their belongings?

The following day after the discovery, he bravely ventured back down the stairs to continue his explorations. Before long he found even more ammo and other strange equipment.

There was so much ammo... enough to take down a small army. He must've been worried that a box would contain live explosives or something! Nevertheless, he kept opening boxes, desperate to know what was in his home.

He found this small pouch. When he unzipped it, he found... even more ammo. He began to suspect the answers were in the safe, which he still hadn't been able to open. But did he really want to know the truth?

He felt totally unprepared for what he might find behind the safe's locked door. He kept looking around the room before attempting to venture into the safe when he saw something that made his heart skip a beat.

A grenade was tucked into one side of another container stuffed to the brim with bullets. He immediately realized there was no pin... it was live! Wait a minute, it couldn't have been...

Nervously, he inspected the grenade and found that a hole had been filed into the bottom and all the powder drained. This was a huge relief, but he was still alarmed at how ready for war this room was.

After taking a moment to savor the feeling of relief, he opened another ammo box and was rewarded with this amazing sight: loose change. Almost all of it pennies. Thankfully, it wasn't more bullets.

Still, the answers to his questions, he knew, rested in that safe. He decided to go back and try cracking that safe one more time! He gathered his most powerful safe-cracking tools. Mostly blunt objects.

No surprise, the safe fended off hammers and axes and crowbars (oh my). Smartly, he took the safe to a professional locksmith the next day, and posted a message on Reddit promising to update with any news.