By Andy4Christ (self media writer) | 3 months ago 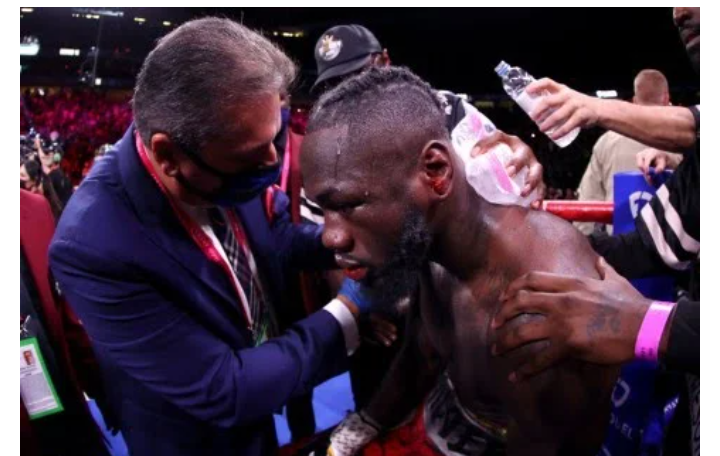 Deontay Wilder’s trainer, Malik Scott, says the defeated American still harbours doubts about the legitimacy of Tyson Fury’s victories, while he revealed that the Bronze Bomber broke a bone in his hand during Saturday’s fight.

The two Boxers went toe-to-toe in an all-time classic in Las Vegas as the Gypsy King defended his WBC crown despite being knocked down twice, eventually brutally stopping Wilder in the 11th round.

Metro Sport was quoted saying, "both boxers had goaded one another in an extremely heated build-up to the fight and the animosity continued afterwards when Wilder refused to shake Fury’s hand, saying he did not ‘respect’ the lineal champ."

While trainer Scott was far more gracious in his praise of Fury afterwards, he says Wilder is still totally convinced by the accusations that his opponent put weights in his gloves – and cannot simply forgive and forget.

Speaking in an interview with ES News, Scott revealed Wilder had suffered a broken hand, broken finger and a busted lip.

Responding to question from the interviewer about his state, after the Tyson Fury Knock Out: “He’s good, I took him up into his room. We saw the doctor afterwards, everything was cool. He’s got a busted lip, he broke his hand, broke his finger or knuckle. But life goes on.”

While the boxing continues, Wilder slowly began gassing out after round 8, and Fury began piecing him up. In the 9th and 10th rounds, Fury began battering Wilder. But, ‘The Bronze Bomber’ held on, hoping to unleash his ever-present dagger – right hand.

Content created and supplied by: Andy4Christ (via Opera News )