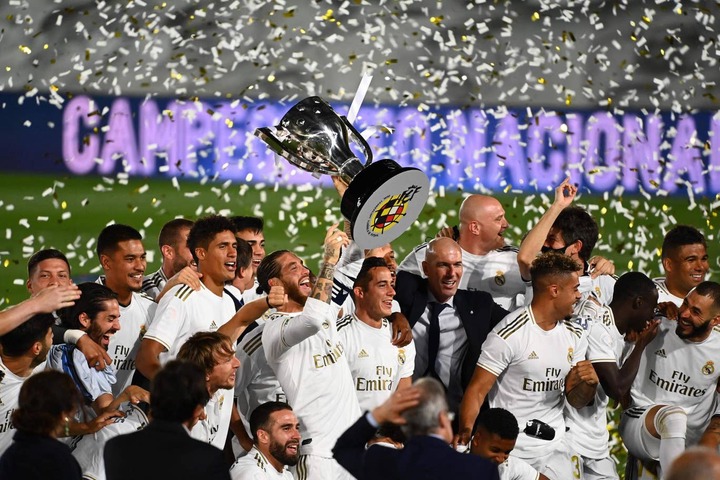 Real Madrid won their first league title in 3years after the 2-1 victory over Villarreal on Thursday night. Los Blancos have been accused often times of been assisted by VAR but the statistics shows they invested and are only reaping the dividends of their efforts. French gaffer Zinedine Zidane reiterated at the start of the season that winning the La Liga was Madrid's top priory and he has delivered on that. There are always indicators to show why winners eventually win and Real Madrid is no exception. From the management to the squad, key decisions were taken that have paid off. Let's find out what those decisions were that have handed Los Blanco the 2019/2020 La Liga title. On course to win the Zamora prize for the fewest goals conceded is $45million goalkeeper Thibaut Courtois. The last Real Madrid goalkeeper to win the prize was the legendary Iker Casilas in the 2007/2008 season. So far the Belgian has kept 18 clean sheets this season after the victory over Deportivo Alaves and with a game to spare. No Madrid keeper have been able to manage that since Francisco Buyo in 1994/1995 season. Two years ago when Courtois was bought from Chelsea after the world cup where he won the golden gloves, he faced alot of criticisms for high profile errors. He also faced stiff competition from present PSG goalkeeper, Keylor Navas who was instrumental in Madrid's three champions league titles. Navas has since left while Courtois has made the goalkeeping position his own. Prior to this season, Athletico Madrid's Jon Oblak and Barcelona's M. Ter Stegen dominated goalkeeping statistics in La Liga. Real Madrid's La liga's triumph can not be possible without the input from the Belgian. We will say thumbs up to Florentino Perez for making him a top priority in the summer of 2018.

Zinedine Zidane Getting His Men 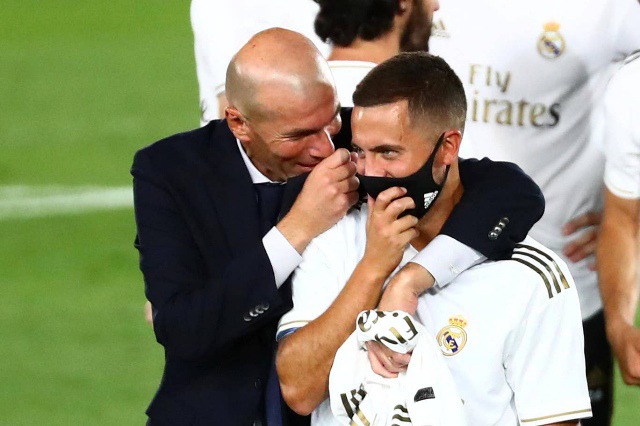 One of the main issues rumoured to be the reason for the fallout between Florentino Perez and Zinedine Zidane in 2018 where the coach announced his resignation was due to misunderstanding on matters of player transfers. While Perez wanted some players such as C. Ronaldo out for commercial reason, Zinedine Zidane was opposed to all that for the sporting reason. On the other hand, the French gaffer wanted players like Gareth Bale out but his boss opposed. At the end, it didn't go very well as Real Madrid struggled for consistency after the departure of the Frenchman. On his return, Zidane have overseen very delicate transfers. While his wish for players such as Paul Pogba and Kylian Mbappe were not successful, other options such as Eden Hazard, Ferland Mendy, Federico Santiago Valverde, Luka Jovic, Rodrygo Goes and Eder Gabriel Militao were successfully brought into the Los Blanco side over the last one and half years. Needless to say, the signings have done pretty well. Eden Hazard is the galactico signing they always wished for, though his season has been up and down due to persistent injury worries. Players like Rodrygo, Mendy, Militao and Valverde have all had massive impact in the run to their 34th La Liga Title. Zinedine Zidane have often been tagged a lucky coach by some football analysts, due to the fact he had a goal machine in the person of C. Ronaldo when he won his first set of trophies. The fact he is a top genius and tactical masterpiece have been put to bed with the current title in his hands. Give the gaffer his men and he will deliver you the trophy.

Karim Benzema have been one of the reasons Madrid have won the La Liga title this season. Currently on 21 goals and 8 assists in La Liga, only Barcelona's Lionel Messi have bettered that record this season. Often underappreciated and doubted if he can lead a line without C. Ronaldo, Benzema have silenced doubters with one of his most outstanding seasons since wearing the La Liga Jersey. Aged 32, he seems to be just getting started. Karim Benzema, one of the senior players in the Madrid squad have fully repaid the faith put in him by his country man, Zidane when he had a barren run. In Zidane's first era, many had thought Real Madrid will part ways with the Frenchman after his fallout with French team mate, Mathieu Valbuena, and the sex scandal issues. His barnish from the French national team and a barren run of form was brought to cash out on him. However Zidane kept faith in him and now he will be thankful he did. 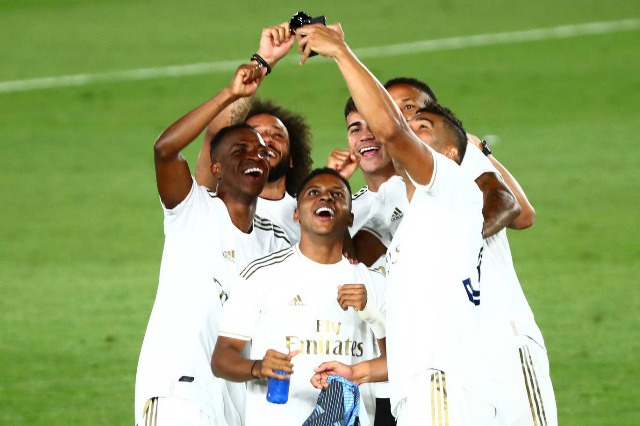 No doubt, summer signing Ferland Mendy have been a revelation this season. The foresight of Madrid to have Mendy in the squad is gradually paying off. The former Lyon full back had many doubters when he was bought for €48million in 2019. No doubt he had stiff competition from Marcelo for the left full back position, but he has done excellently in the Brazilian's absence. In the coming seasons, Real Madrid will scarcely miss Marcelo if he eventually retires all thanks to the performance of Mendy. In the 2018/2019 season, the left back position was seen as an area of weakness for opposition teams which exploited the attacking instincts of Vieira Marcelo as he was unable to cover up when caught out of position. This season however, those concerns were put to the barest minimum. Aged 34, Ramos have been ever present in the Madrid squad this season and is showing no signs of slowing down after racking up 10 goals, the highest for a Defender in the Spanish league. He has been a key reason why Real Madrid have won most of their matches this season, scoring crucial penalties to keep Madrid alive in the title race. His crucial goal line clearance against Granada will go down as one of the crucial moments of the season. Ramos have been known to show up in the big moments scoring winning goals and decisive equalizers all through his career. He is indeed a man for the big moments. 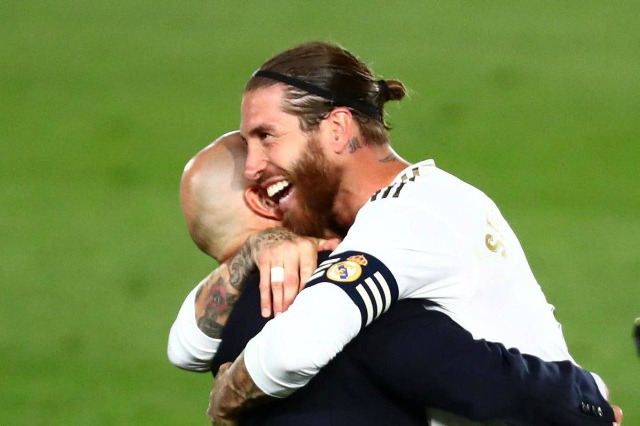 However the much publicised dressing room argument between Sergio Ramos and Florentino Perez in 2019 after the 4-1 champions league defeat in the hands Ajax led football fans to believe his days were numbered as a Real Madrid player. Many thought he will be a rebel in the team and perhaps cause disharmony in the squad. Ramos who have been known to be a fighter and popularly tagged the spiritual leader of the Madrid squad, kept his cool and showed why he was the club captain. Apart from his performance in the squad, keeping him happy in the team have led to some unbelievable awesome performances this season. The captain have been an inspiration to the entire squad as he led by example all season. Florentino's decision to keep him happy and not sack him (even though it would have cost Madrid so much to buy out his contract) have eventually paid off. 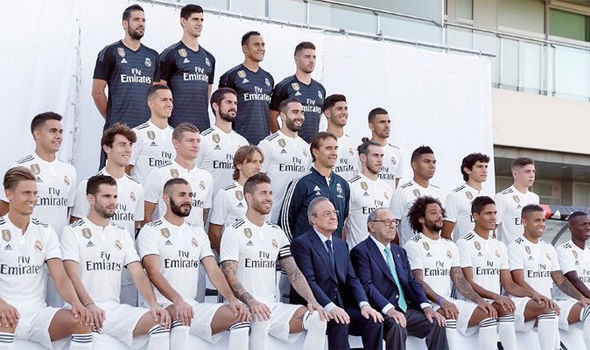 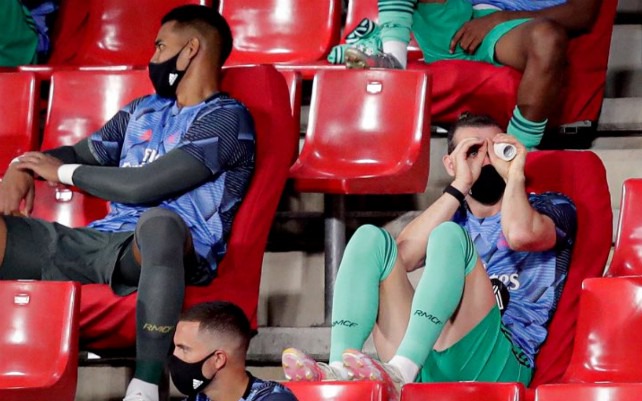 The Real Madrid squad is currently a blend of experienced and aging players such as Luka Modric, Karim Benzema, Gareth Bale, Sergio Ramos and youthful still improving players such as Vinicious Jnr, Luca Jovic, Ferland Mendy and Eder Militao. The squad also have players in their prime as Eden Hazard, Rodrygo, Thibaut Courtois, Toni Kroos and Isco. It must have been a real headache to keep all these players happy and to be able to convince some of them to be squad players despite the sum spent to bring them in. True, players such as Gareth Bale and James Rodriguez have been difficult to offload due to their cost, they have all been instrumental in handing Madrid the title as they take advantage of chances given to them. Keeping such top quality players in the squad means, injury concerns didn't hit much on the team overall.