Before walking into tonight's match at NXT TakeOver 31 to challenge Damian Priest for the NXT North American Championship, Johnny Gargano had proclaimed that he would walk out of the match as the new titleholder. He was confident that he would be a champion in NXT alongside his wife Candice LeRae, who is also scheduled for a title match against Women's Champion Io Shirai later in the night.

Unfortunately, Priest poured water all over Gargano's aspirations as he defeated him and retained the NXT North American Championship. 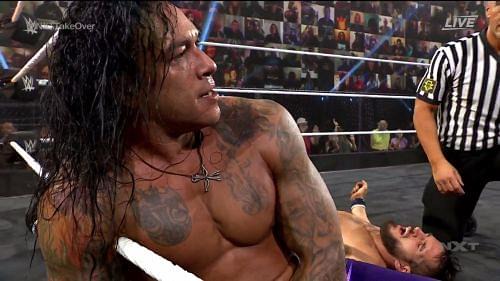 Damian Priest knew before walking into tonight's match that Gargano is a former North American Champion. Therefore, The Archer of Infamy deduced that it won't be a walk in the park with Johnny TakeOver and hence started the match with great offense.

At one point in the match, Priest leaped out of the ring so that he could take out Gargano who was outside the ring. However, the shrewd Rebelheart was quick enough to drag in two members of the security personnel in front of him and saved himself from harm.

This prompted the referee as well as Priest to check in on the security personnel and Gargano took advantage of the situation by delivering a low-blow to the unaware North American Champion. Gargano followed this up by kicking Priest square in the jaw after dragging him back inside the ring.

Unfortunately for Gargano, all his ill-mannered efforts were in vain as Priest blocked the One Final Beat and dropped Gargano who was caught in the middle rope with The Reckoning to get the win and retained his championship at TakeOver 31.