By Oladblog (self media writer) | 1 year ago 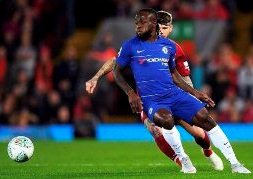 The Italian sports daily claims that the Nerazzurri gave up on attempting to sign the former Nigeria international because Suning Holdings Group did not give the green-light to the move.

Inter Milan powers that be argued that Conte has at his disposal four players who can slot in at the wing-back role including Achraf Hakimi, Ashley Young, Matteo Darmian and Danilo D’Ambrosio.

It would be interesting to see how Moses's future pans out as the summer transfer window is shut in most of the top European Leagues and he's not in the plans of manager Frank Lampard for the 2020-2021 season considering that he has been training with the loan group since his return to Stamford Bridge.

The former Wigan Athletic man has taken in loan spells at Liverpool, Stoke City, West Ham, Fenerbahce and Inter Milan since his arrival at Chelsea eight years ago after failing to establish himself as a first-team regular.

The likes of Christian Pulisic, Callum Hudson-Odoi, Hakim Ziyech and Kai Havertz are believed to be ahead of Moses in the pecking order of wingers at Chelsea.