LIV Vs ARS: Head-To-Head Stats Since 1992, How Arsenal Could Line Up And Predicted Match outcome.

By SirKinGsEliTe (self media writer) | 12 days ago

With the November International football week now closed, with many National teams especially those of Europe and South America now assured of their places in Qatar 2022, it is another time to resume league duties. Premier League actions kickoffs on Saturday 20th November, with Leicester City and Chelsea to clash in the first match of the weekend, while Liverpool and Arsenal will engage in the last match of the day. 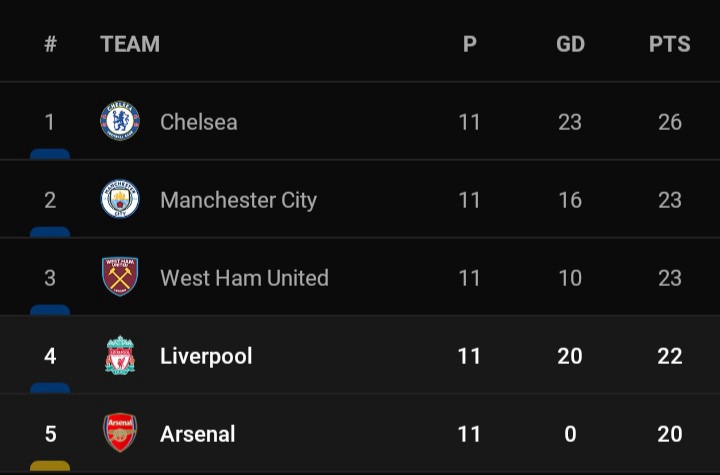 Liverpool and Arsenal, separated by two(2) points, are 4th and 5th respectively in the Premier league table, with the clash expected to test Arsenal's resurgence that have seen them improved impressively to claim 20 points and are unbeaten in all competitions. Liverpool's unbeaten streak was halted by West Ham on matchday 11, with the visit of Arsenal looking like a must win for the Kops. 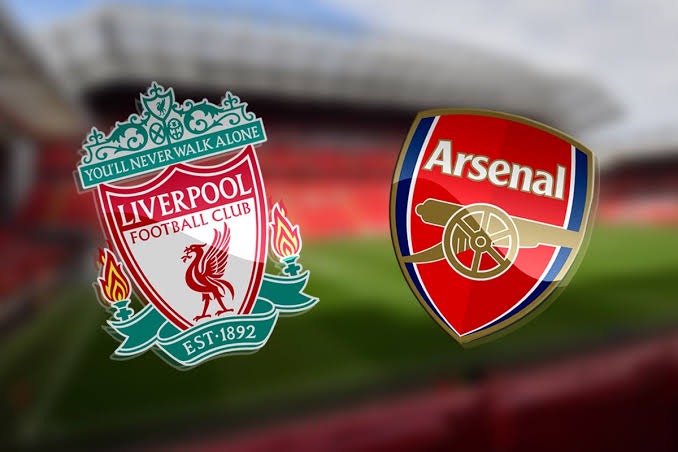 Ahead of the match at Anfield, 06:30(GM +1), let's look at the Head-To-Head Stats between Liverpool and Arsenal since the Premier league Era, How Arsenal Could Line Up and Predicted Match outcome.

Since the Premier league Era, Liverpool and Arsenal have squared up 58-times in England's top flight league. Their first premier League match was on the 23rd of August 1992 at Anfield, with Arsenal triumphing 2-0 courtesy of goals from Anders Limpar and Ian Wright in the second half. 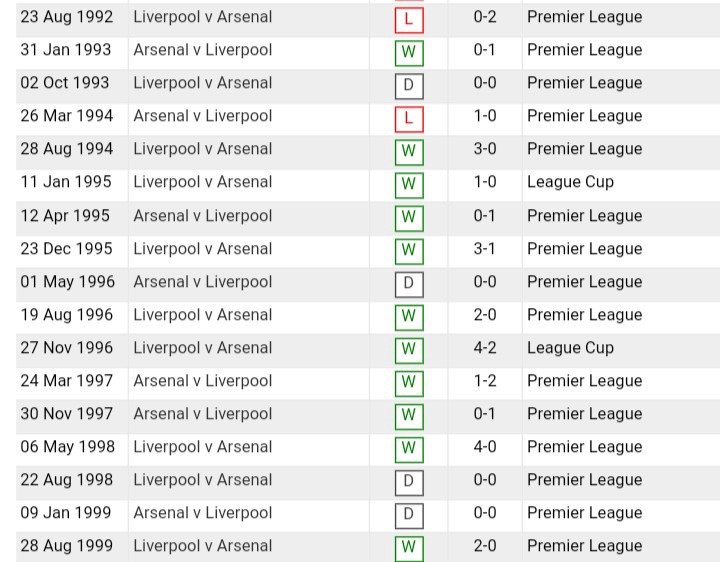 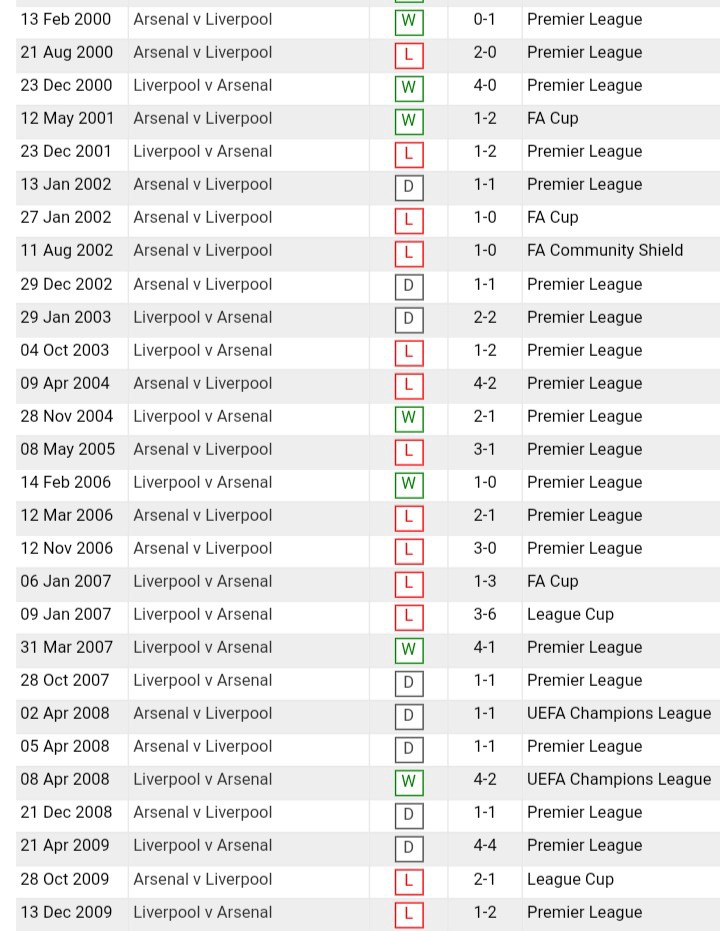 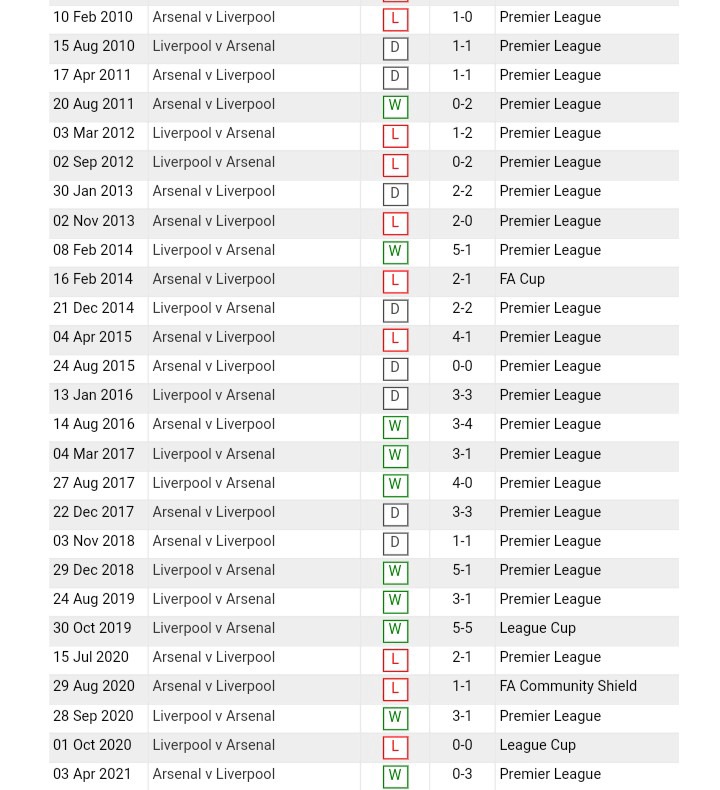 Since their 3-3 draw at Anfield on 13th January 2016, Arsenal have been defeated by the Kops on their last five(5) visits to Anfield, conceding 3 or more goals in each match.

How Arsenal Could Line Up

As reported, Pierre Emerick Aubameyang suffered a minor injury on international duty but is likely to be fit in time for the trip to Anfield. Thomas Partey didn't travel with Ghana National team, as he had to build up fitness and will likely be ready for the gunners. Kieran Tierney played all his country's World Cup qualification matches and is likely to make the starting lineup. Grant Xhaka remains the only long term absentee, with Mikel Arteta having a full squad to select from.

Mikel Arteta should deploy a 4-4-2 formation, with Aaron Ramsdale likely to keep his spot in between the goal posts after a fine England debut. At the back four, Ben White should partner Gabriel Magalhaes, with Kieran Tierney starting in the left side defence and Tomiyasu on the right side. 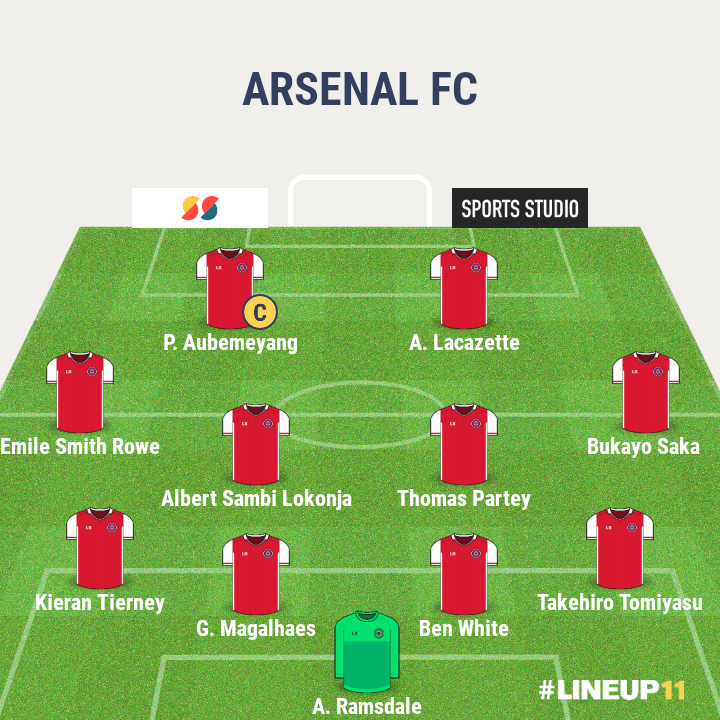 Jurgen Klopp's Liverpool are no doubt one of the Europe's best team at the moment, and remains a yardstick for the likes of Arsenal, Chelsea, Manchester United and Tottenham. Their defeat to West Ham clearly shows they are beatable and for Arsenal, they have to put much than West ham did to defeat the Kops at Anfield. However, were many tips Liverpool FC to get make it six(6) wins in a row against the gunners at Anfield, Arsenal are likely to snatch a draw and maintain their unbeaten streak.