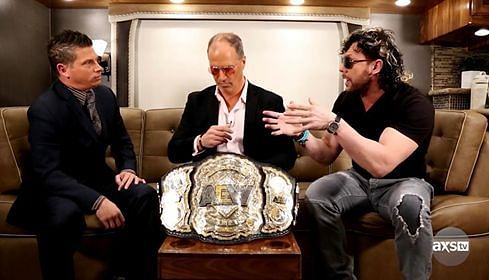 On AEW Dynamite, Kenny Omega stole the AEW World title from Jon Moxley when Don Callis tossed him a microphone. As Moxley hit Callis, that distracted the referee long enough for Omega to take advantage. Several V-Triggers and a One-Winged Angel later, we had a new champion.

Tonight, Kenny Omega appeared on IMPACT Wrestling to explain why he cheated Jon Moxley and stabbed AEW in the back. While he was there, he also laid out a pretty interesting comparison between his current profession and a former hobby. This led him to hint at a future match with the IMPACT Wrestling World Champion.

Kenny Omega calls himself a championship collector; could be eying the IMPACT World title

During his interview with Mathews, Omega stated that he considered himself a collector of sorts. He used to collect comic books, but could never really get his hands on some of the most highly sought-after editions. However, he was able to do something similar when it came to professional wrestling.

Omega said that he loved traveling and would be adding more to his collection as time went on. Could we see Kenny Omega taking the IMPACT Wrestling World title in the future? If he tries, could Rich Swann stop him?

Now, Rich Swann certainly has a reason to introduce himself to The Best Bout Machine. Before Omega's interview, Swann was denied access to the parking lot, because it was for the "World Champion."

With Swann and some of the IMPACT locker room feeling a little disrespected, who's to say that we won't see them appear on Dynamite soon?