WWE Superstar Charlotte Flair Reveals How Andrade Proposed to Her

WWE Superstar Charlotte Flair got engaged with Andrade at the dawn of the new year. In her recent appearance on Nikki and Brie Bella's podcast, Charlotte Flair shared the details about how Andrade asked her to marry him.

Charlotte Fair went on to describe the whole day in details. She even pointed out how they faced difficulties owing to their different languages and how they managed to work it out together. 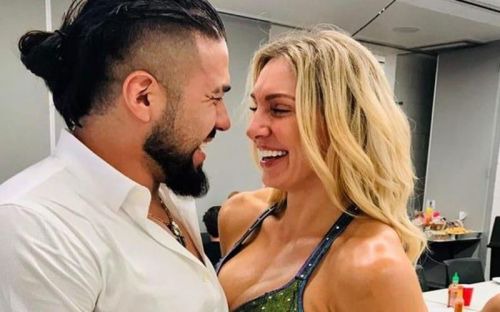 Here's what Charlotte Flair had to say;

"So, our first trip together, he took me to Cancun. When he first said, let’s go to Cancun, I was thinking spring break… We wanted to go to Cancun again for New Years. He took me to this really nice restaurant that was on the water. After we ate dessert, the waiter said let me take you this way. The restaurant at the top had a staircase to the dock where a yacht was waiting. We got on the boat, listening to music and drinking and we pulled up to two other big boats. We went on the nose. There were fireworks on the countdown. When we were listening to the music from the other big boats, I turned around and he was down on one knee. He knows how much I love boats and the water."

"For our first New Years, when we started dating, or whatever you want to call it, we would have to google translate to each other. Our first New Year’s, he could speak it but it was more like, ok, didn’t understand, we were google translating at the bar. Then we return the next New Year to being proposed. Love speaks one language. I can understand his language but I can’t speak it. All the movies we watch have subtitles."(h/t  WrestlingNews.co)

Charlotte Flair and her current run in WWE

At this year's WrestleMania 36, Charlotte Flair defeated Rhea Ripley to become the NXT Women's Champion. She went on to work on all the three brands of WWE until finally dropping her tile to Io Shirai.

Following that, Charlotte Flair posed a threat to Asuka's RAW Women's Championship reign, and she left the television after an injury angle. The Queen later revealed that there have been a few complications arising from her cosmetic surgery and she will be stepping away from in-ring action for a while. As of this writing, it remains uncertain as to when Charlotte Flair will return.