Opinion: How Antonio Conte And Zinedine Zidane Could Lineup At Manchester United

By SportSire (self media writer) | 8 months ago

Apparently, Ole Gunnar Solskjær is currently under pressure at Manchester United, followed by their 5-0 heavy defeat against Liverpool yesterday. Of course, the club hasn't made any decisions about the Norwegian manager's future, but it's likely he will leave Old Trafford before the end of the 2021-2022 season. 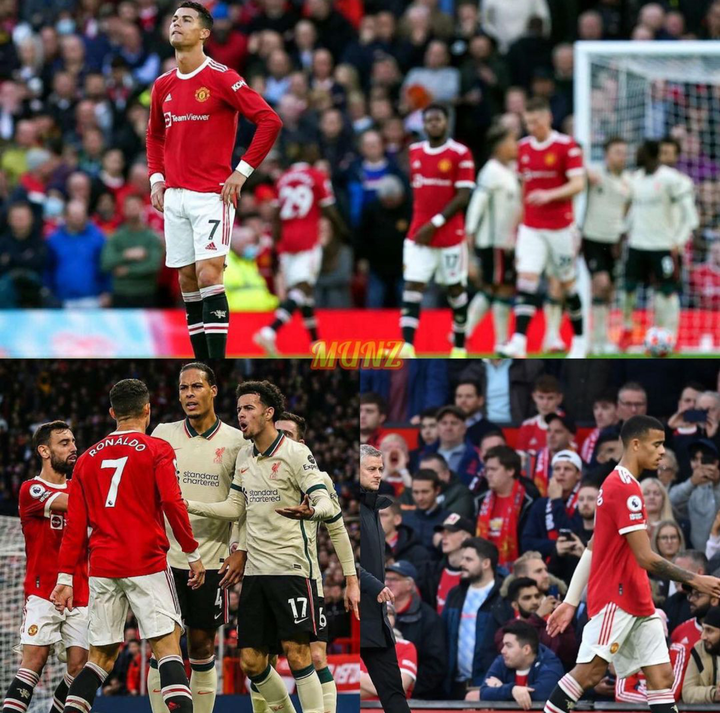 According to several reports, Antonio Conte and Zinedine Zidane are the possible candidates to replace Ole Gunnar Solskjær, if the club decides to sack him in the middle of the campaign. As a result, there is a particular way the two coaches could lineup at Manchester United.

Frankly, both Antonio Conte and Zinedine Zidane love attacking football, so they are able to bring the best of the players, particularly the likes of Cristiano Ronaldo, Jadon Sancho, Raphael Varane, Bruno Fernandes and the rest. Without a doubt, both formations are capable of restoring the club's lost glory in Europe's top-5 leagues. 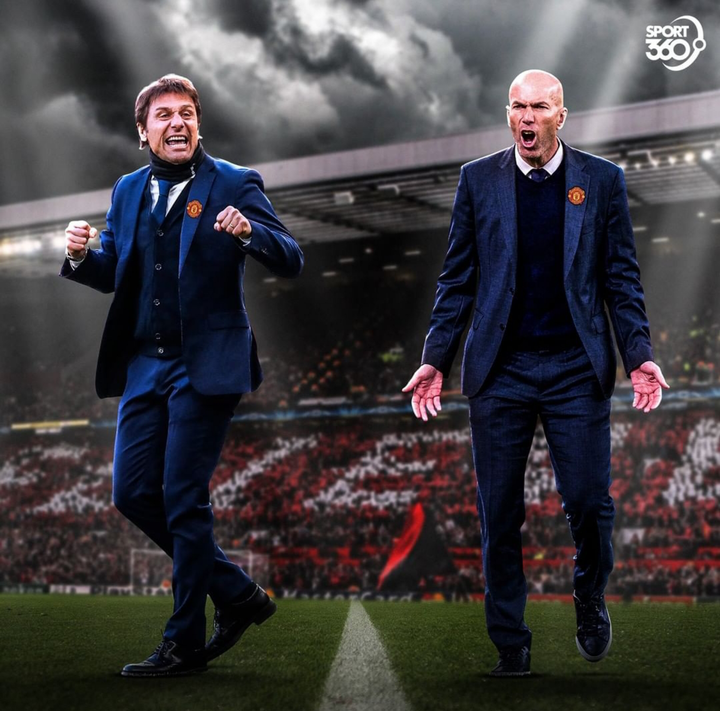 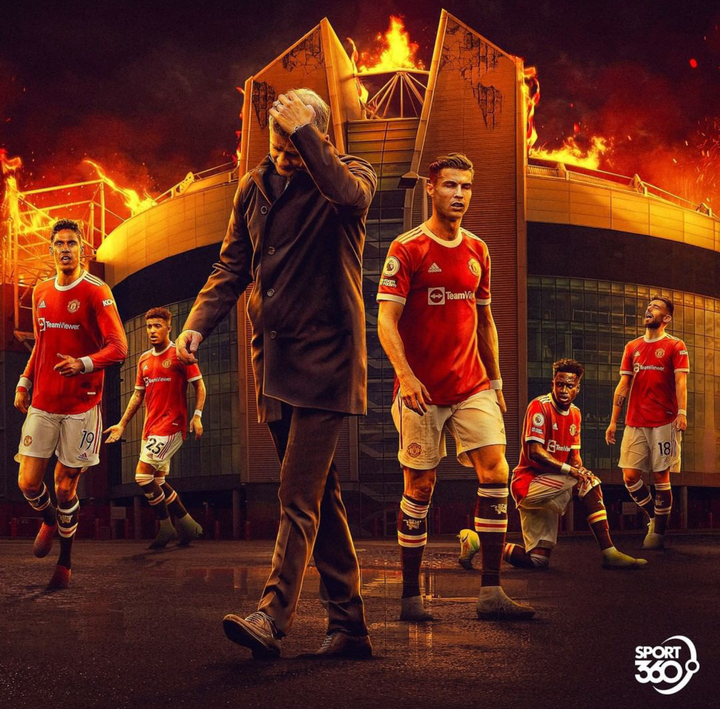 Having seen the French and Italian gaffers' managerial careers, they would like to take the job at Old Trafford because Manchester United are amongst the top clubs, in the world of football. And, they can both lineup as regards the two formations below. Apparently, the Italian manager has many things in common with Thomas Tuchel, having seen his all-around displays at Inter Milan last season. Antonio Conte loves to play an attacking style football, and he likes to attack and defend at the same time. As a result, Luke Shaw, Harry Maguire and Raphael Varane will play as three-men centre-back, while Alex Telles and Diogo Dalot will dazzle as wing-backs. Of course, Conte loves using reliable and sharp defenders who are able to defend very well, so Victor Lindelof, Eric Bailly and Aaron Wan-bissaka may not make it to the starting XI. As regards the midfield, the Serbian footballer will play as a single defensive midfielder, while Paul Pogba and Bruno Fernandes play as double No.8. So, the Portuguese will play as a box-to-box midfielder, based on his creativity. Speaking of the frontline, both Cristiano Ronaldo and Mason Greenwood will dazzle as double strikers. Apparently, the Ballon D'or winner is indeed a goal-machine and he's very clinical in front of goals, which means the Italian gaffer will use him as his next Romelu Lukaku. Without a doubt, this particular lineup is able to take the Red Devils far in all competitions. 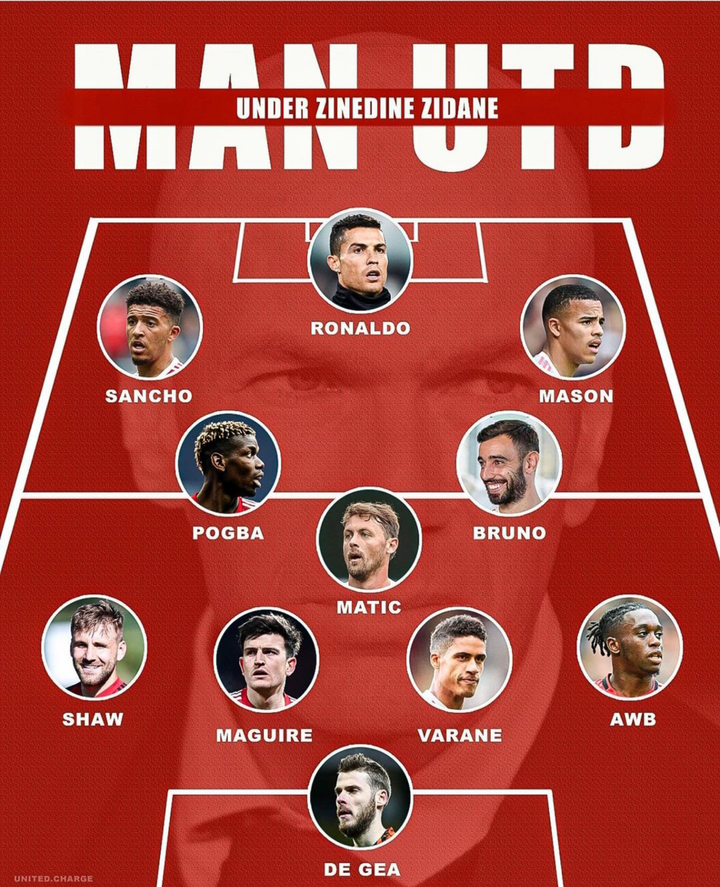 The French boss is enamored with using the formation of 4-3-3, because he wants his midfielders to attack and defend at the same time. That being said, the likes of Fred and Scott McTominay may not be regular starters, as they don't usually attack and defend like the Serbian midfield mastero. So, Luke Shaw (LB), Harry Maguire (CB), Raphael Varane (CB) and Aaron Wan-bissaka (RB) will play from their usual positions, as they have played together many times and understand one another. As a result, Matic remains as a single defensive midfielder, while the Frenchman and the Portuguese attack from midfield. Obviously, the Serbian will handle the midfield like Casemiro, while Pogba and Fernandes will perform against the opponents like Luka Modrić and Toni Kroos. In addition, Cristiano Ronaldo anchors the No.9 role, while Jadon Sancho plays as a left-winger and Mason Greenwood as a right-winger. In this formation, Zidane will depend on the Portuguese magnifico to bring goals, while the two English youngsters maneuver from their positions up front.

Which one of these managers do you want at Manchester United?