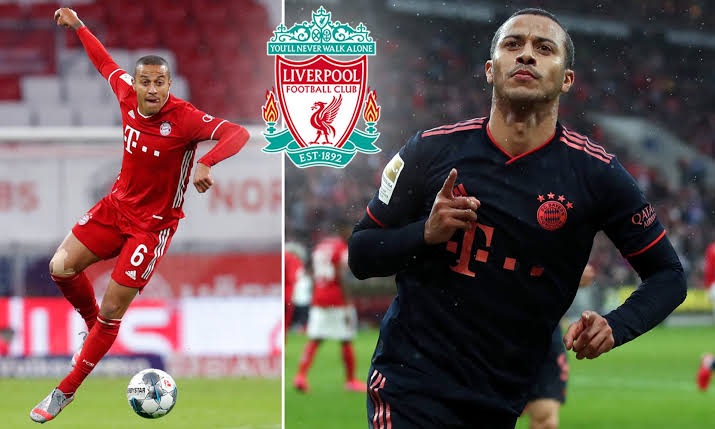 Reds will agree on the €35m signing of Thiago Alcantara from Bayern Munich in the next week. Midfielders like Henderson, Keita and Wijnaldum all do a great job and fit perfectly into the system, but they are more about energy than quality at the highest level.

It’s not to say they need to be replaced completely, but adding someone like Spain international could take them to a whole new level. He openly admits that Alcantara’s time at Germany might be coming to an end, before signing that he is looking for a new challenge.

Bavarians chief Karl Heinz Rummenigge also said that Thiago wishes to leave the Bundesliga giants, confirming that if this stays the case that the midfielder will be sold.

The 29-year-old midfielder would certainly add a different dimension to Reds midfield, the deep-lying playmaker would add more creativity to the PL champions’ ranks in the middle of the park. There’s no doubting that the Blaugrana academy graduate is one of the best in his role, he’s definitely one of the best passers of the ball in world football full stop. Thiago has bagged three goals and two assists in 35 games across all tournaments this campaign. Fenerbache have made an offer to Xherdan Shaqiri for a potential move this summer, according to reports. Liverpool won’t stand in the player’s way.

This comes from Fotomac in Turkey. They believe that Fenerbache have entered the race for a player previously linked with arch-rivals Galatasaray.

More than that, they’ve even made an offer to the player. They will pay Shaqiri £1.8m-per-year – although, that might not be enough, they say.

Shaqiri wants more, apparently. He wants a contract worth around £2.7m-per-year, which is quite a sizeable difference to the Turkish outfit’s offer.

Working in Fenerbache’s favour, though, is Liverpool’s position. The Reds won’t stand in Shaqiri’s way and will allow him to leave the club this summer.

The report even goes as far to say that there are claims that Liverpool will agree to mutually terminate his contract early to allow him the move.

What RTK has to say

It all sounds entirely believable up until that last bit. We find it almost impossible to believe that Liverpool would mutually terminate his contract, especially in the current climate. That’s an awful lot of money they’d give up when there will be teams out there willing to pay some sort of fee.

The only way we could see that happening is if Liverpool are desperate to get his wages off the books and no one is coming forward with a fee. That seems very unlikely, though, and we’ll write off any chances of mutual termination.

"As for the move, Fenerbache are a massive club and it would be great for Shaqiri, in our opinion – even if they’re not playing particularly well this season."

But if Shaqiri wants a prominent role at a club with a huge fanbase, this is a wonderful opportunity. He’d need to sort out the financial side of things, of course, but if he can do that, this would be a good move.

As for Liverpool’s side, Shaqiri has barely played this season and we expect a sale this summer. As long as someone fronts the cash, that is.

Chelsea and Manchester City to battle for Ajax star? Chelsea could reportedly battle it out with Manchester City to land the signature of from Ajax this summer.

The 27-year-old is expected to leave the Dutch champions ahead of the 2020/21 campaign and a move to the Premier League remains a favourable option for him.

The Blues have been regularly linked with his services in recent months, but The Sun claims that the west London side could face direct competition from the Cityzens for his services.

Tagliafico, who bagged five goals and seven assists during the recent campaign, could be available for a cut-price deal of around £22m in the next transfer window.

Ben Chilwell of Leicester City has been linked with a move to either Chelsea or City this summer, but it appears that both clubs could look elsewhere after learning of the Foxes' £70m asking price.

Frank Lampard is likely to sanction the sale of Emerson before purchasing a new left-back for the Blues. Meanwhile, Pep Guardiola could part ways with both Oleksandr Zinchenko and Angelino ahead of next term.