By Challyboy (self meida writer) | 19 days

The table below, shows the biggest premier league argon in premier league history. These clubs listed in the table, have proven to be the best clubs in England. Some of these clubs has won great trophies.

However, they won the best premier leagumargine in the year 2017/2018 season with a point margins of 19 pouts ahead the second place that season.

The next ranked is the Liverpool. They are the defending champions in premier league last season and they are known as the reds. The Liverpool are one of the best European club with the most EPL title and champions league title. The Liverpool had their best season in the2019/2020 season with 118 points margin.

The third club is the Manchester United. They are popular known as the red devils. They did excellently great during the time of Sir Alex Ferguson. They won their biggest margin in the year 1999/2000 with 18 points. 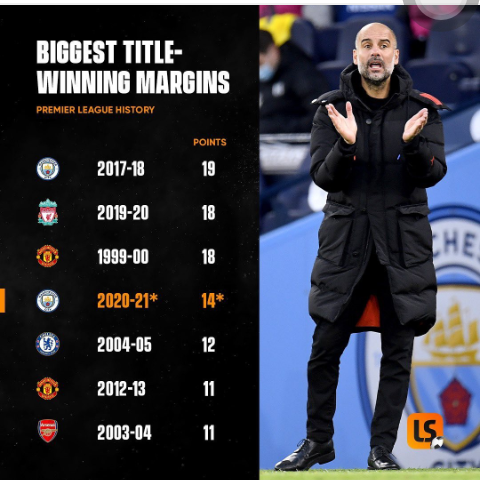 The question is could the Manchester City break the biggest margin this season?