Seth Rollins's fiance Becky Lynch has been away from WWE recently as the two are expecting their first child together. However, while The Man is unable to come to work, Seth Rollins continues to be one of the top performers in WWE. 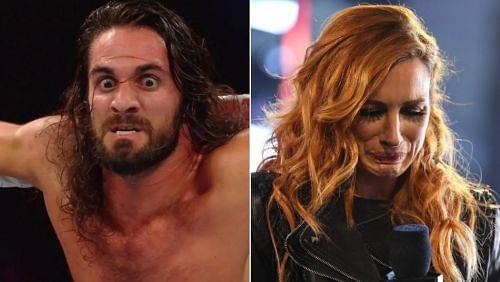 Seth Rollins recently took a dig at Matt Riddle saying that he never wants to face The Original Bro and doesn't care if he is on RAW or SmackDown. While initial speculation led fans to believe this was a work, that is apparently not the case at all.

Seth Rollins has genuine heat with Matt Riddle because of certain comments Riddle's wife had made on his social media involving Rollins' partner Becky Lynch.

''Calling out multiple Main Roster Divas over the past couple of weeks for being straight skinny jiggly fat (not saying they aren’t beautiful, just saying SQUAT). It’s funny because there have been multiple female wrestlers that have asked to train with me. Each one of them look great in their gear. Clearly they know what they are doing (especially if they want to train with yours truly ). ALL females freaking SQUAT and go HARD! I do not have many photos of my rear end in minimal clothing besides these two. Here is a comparison of me, not caring what I look like, just trying to be strong a decent Olympic Lifter, and a mom of 3 vs two females getting paid a TON of money for how they look. Rant over”

Throughout the entire weekend, Riddle talked shit about Rollins, and how he never evolved as a performer, how he didn’t take care of his opponents in the ring, how he was stale, etc. This wasn’t just one conversation, it was every time I saw Riddle that weekend.

While this may be a strong reason for Seth Rollins to want to stay away from Riddle, a fan had also stated on Twitter that there is actual heat between Riddle and Rollins. He stated that Matt Riddle had bad-mouthed Rollins saying that he never evolved as a performer.

''Throughout the entire weekend, Riddle talked sh*t about Rollins, and how he never evolved as a performer, how he didn’t take care of his opponents in the ring, how he was stale, etc. This wasn’t just one conversation, it was every time I saw Riddle that weekend.''

This is not the first time that Matt Riddle has come under fire for having heat with a top Superstar. Former WWE Champions like Brock Lesnar and Bill Goldberg have also talked about how little they think of Matt Riddle and how they would rather not work with him in WWE.