By erictimelessbeauty (self media writer) | 26 days ago 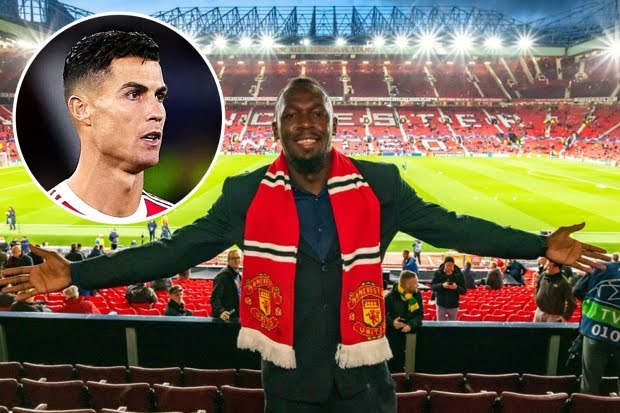 At full-time, BBC sport wrote "Usain Bolt, a Man Utd scarf draped over his shoulders, punches the air as he walks down the steps at Old Trafford" Such was the atmosphere at Old Trafford as once again Cristiano Ronaldo was the hero for the Red Devils.

Before kick off, Bolt told Manchester United media "I just saw Alex Ferguson inside and I thanked him for bringing Cristiano back, so I'm happy about it.

"I'm happy to be here, I haven't been back to Old Trafford in a while.

"So I'm just happy to be here in the stands with everybody to watch the game."

It was a great day to return to the Old Trafford stands as Ronaldo gave fans something to shout about with just seconds left of the match.

Manchester United can claim that they have finally laid the ghost of last season's Europa League final loss to rest but only barely. It was a very lacklustre performance by Manchester United tonight who have David De Gea to thank for not going several goals down before help came from Ronaldo. In fact, if Villarreal's attackers were a bit more clinical, the story would have been very different.

It was de ja vu as Manchester United was forced to come back from behind after Villarreal's Paco Alcacer scored at 53 minutes. Telles equalised seven minutes later but Man United was simply too poor on the night.

Meanwhile Cristiano Ronaldo had a quiet game by his own standards as Villarreal saw to it that he was starved of service. However, it was prudent that Manchester United left him on the pitch because at the very last minute of injury time, Ronaldo hit the back of the net from an extremely acute angle. The match ended 2-1 placing United third in their group but only 1 point behind group leaders, Atalanta.

However, a lot of fans feel that Manchester United is not playing like the lethal United of the Sir Alex Ferguson's era. As a result, quite a number of fans still feel that Solskjaer should be sacked in spite of tonight's result.