By Odunayo4Ruth (self media writer) | 1 year ago

Real Madrid welcome Inter Milan to the Alfredo de Stefano stadium tonight in the champions league as both sides look to put behind their disappointing kick off to the campaign with a win. 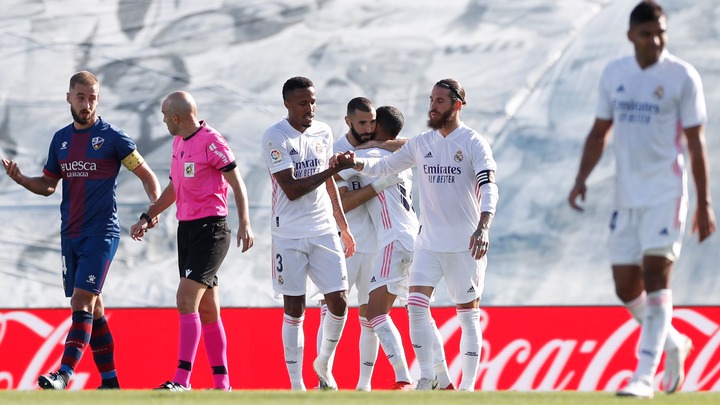 Zinedine Zidane's side suffered a 3-2 loss to the Ukrainian side, Shakhtar Donetsk, despite the fact that the visitors were without a number of key players due to a coronavirus outbreak. The Los Blancos also found themselves 2-0 behind at Gladbach last week but managed to secure a point late on courtesy of goals from Karim Benzema and Casemiro. 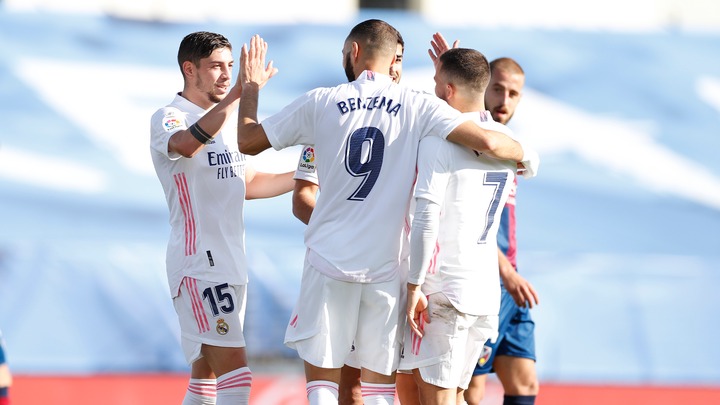 Inter, also buoyed by their success in the Europa League last season were also second favourites behind Madrid to progress from the group, but they were held to a 2-2 draw by Gladbach in gameweek 1 before playing out a goalless draw with Shakhtar last week. 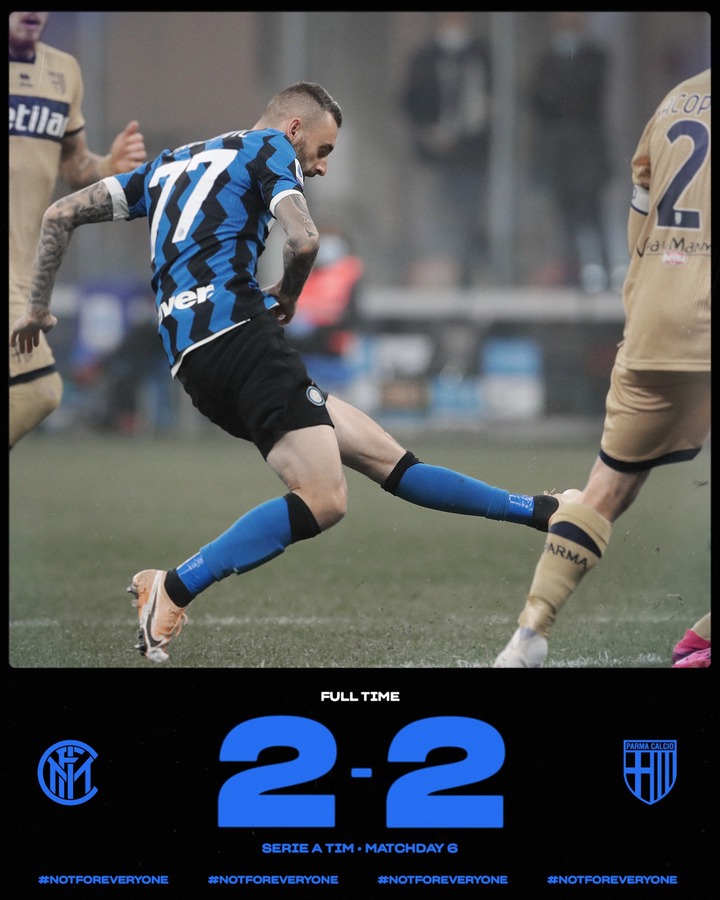 So both outfits come into the game with a level of pressure they would not have expected to have after the opening two matches. Most especially for Antonio Conte as his side are struggling also in the domestic competitions. The Nerazzuris are placed 5th after a 2-2 draw against Parma during the weekend, while Madrid lead the pack in the Spanish La Liga. 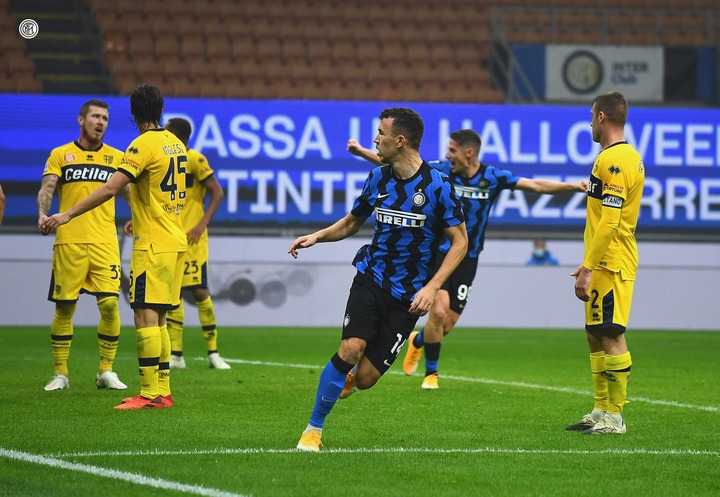 This will actually be the first time that Inter have faced Madrid in any European competition since the group stage of the 1998-99 Champions League, and the Serie A giants ran out 3-1 winners on home soil, having suffered a 2-0 defeat in the reverse match at the Bernabeu.

Madrid will be without the services of Nacho, Martin Odegaard and Dani Carvajal through injury, while Alvaro Odriozola remains a doubt due to a calf problem. Eder Millitao is also out of the game, having tested positive for Coronavirus.

Eden Hazard, on Saturday scored on his return to the team and will be looking to start again alongside Marco Asensio and Karim Benzema. 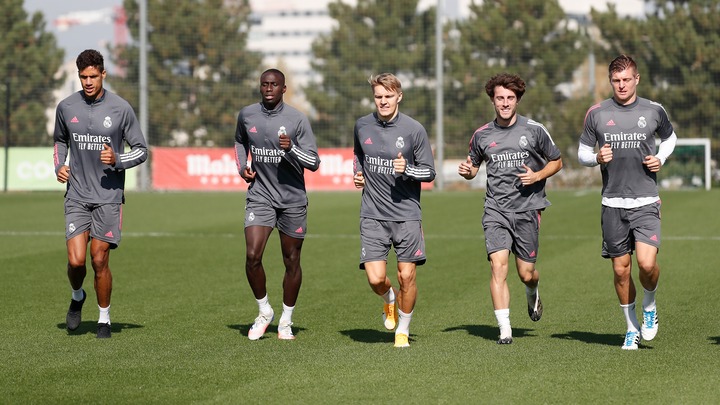 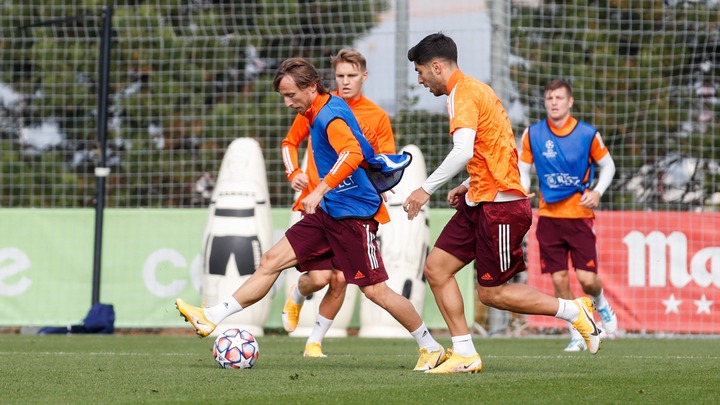 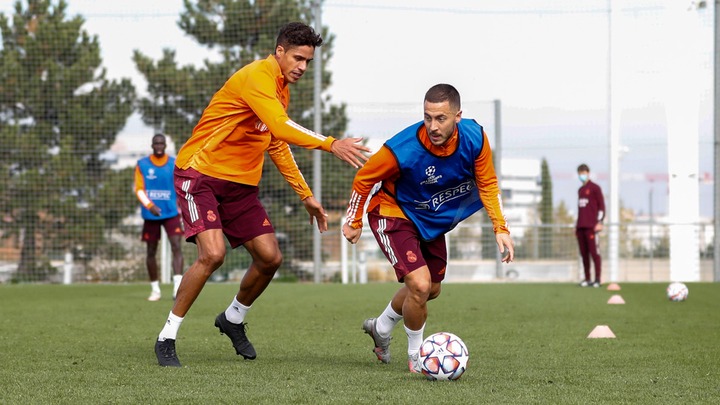 Romelu Lukaku is a huge doubt for Inter, as the Belgian international would be out with a muscle strain, so Lautaro Martinez would be joined by Alexis Sanchez for Inter. 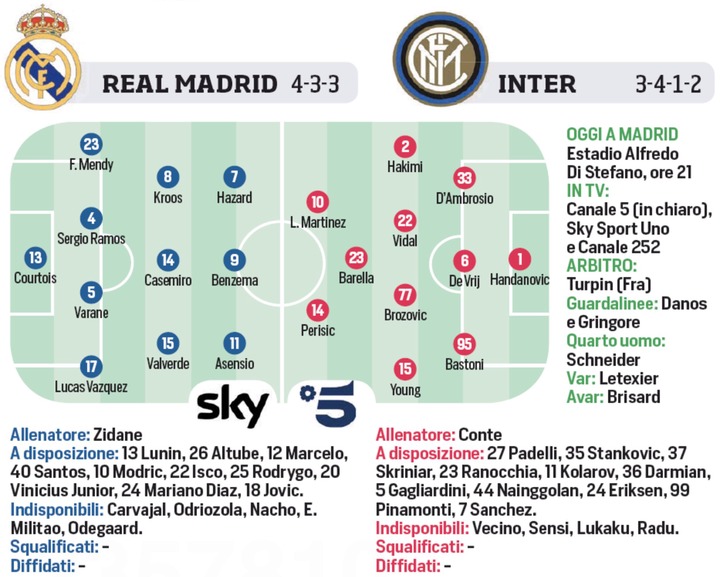 Real Madrid have won six of their seven home major UEFA European matches against Inter Milan (L1), although this is the first time the Spanish side have hosted the fixture since September 1998 - a 2-0 win for Madrid in Inter’s first ever game in the Champions League. 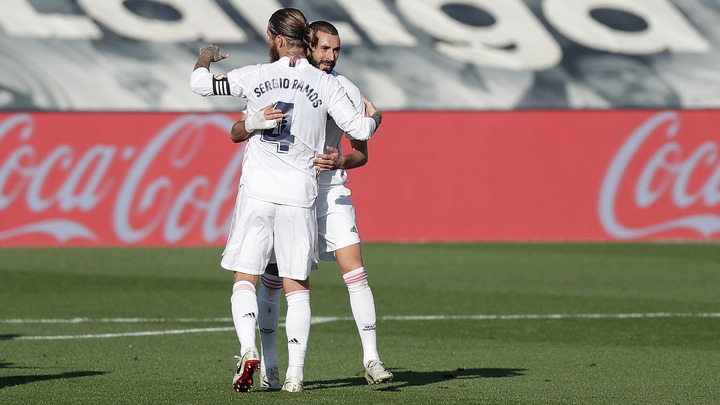 In the last 10 major UEFA European matches between Real Madrid and Inter Milan, the home side has won the match (D1) since a 2-0 away win for Inter in the European Cup in March 1967.

In the European Cup/Champions League, only against Lyon (30%) do Real Madrid have a lower win percentage than they do against Inter Milan (33%, 3 wins in 9 games) among teams they’ve faced at least five times.

Real Madrid have won eight of their last nine UEFA Champions League games against Italian opponents (L1), with the exception a 3-1 home defeat to Juventus in second leg of the 2017/18 quarter-final.

In major UEFA European competition, Inter have lost 15 of their 20 away games in Spain (W3 D2), losing eight of their 10 in the Champions League (W1 D1). 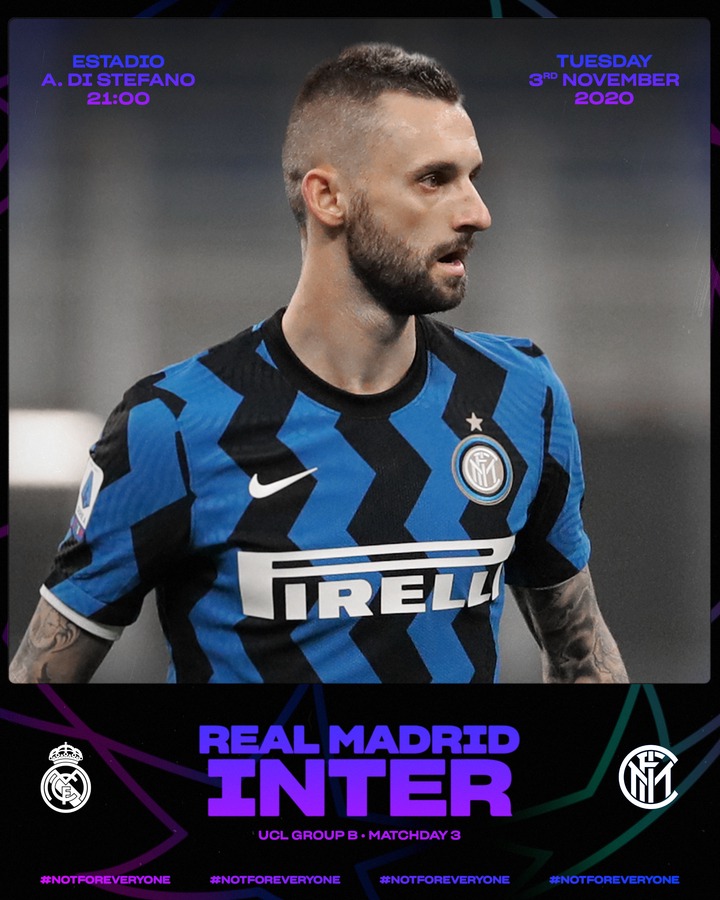 Inter Milan have drawn their opening two UEFA Champions League matches this season – the last time that happened in 2009/10, they went on to win the competition under Jose Mourinho.

Real Madrid are winless in their last four UEFA Champions League matches (D1 L3), their worst run since September 2006 when they went five without a win, a run which featured Zinedine Zidane’s last ever Champions League appearance. 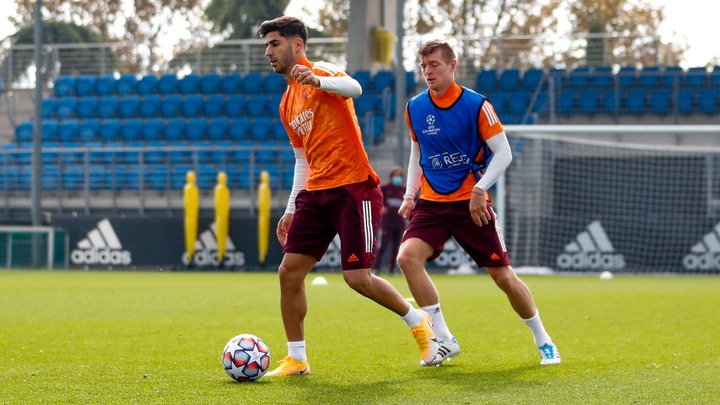 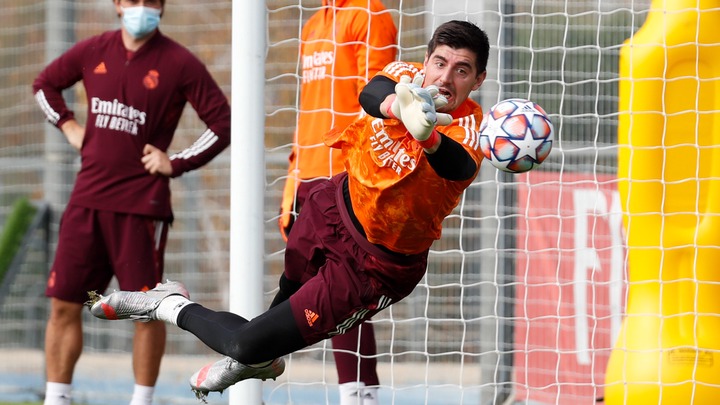 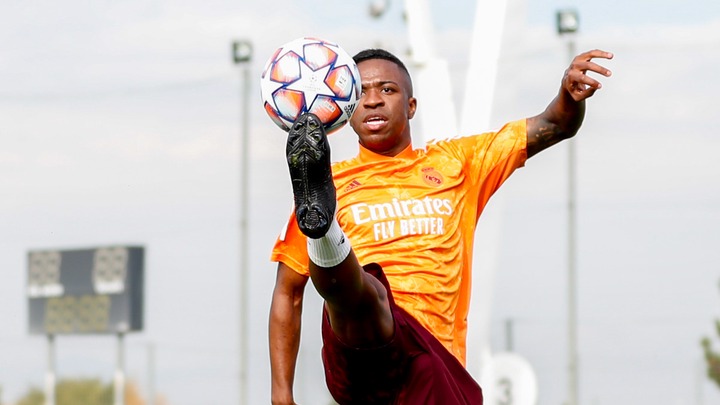 Real Madrid striker Karim Benzema found the net on MD2 at Borussia Mönchengladbach, the 16th different season the Frenchman has found the net in the UEFA Champions League, a joint-record he shares with Ryan Giggs and Lionel Messi. 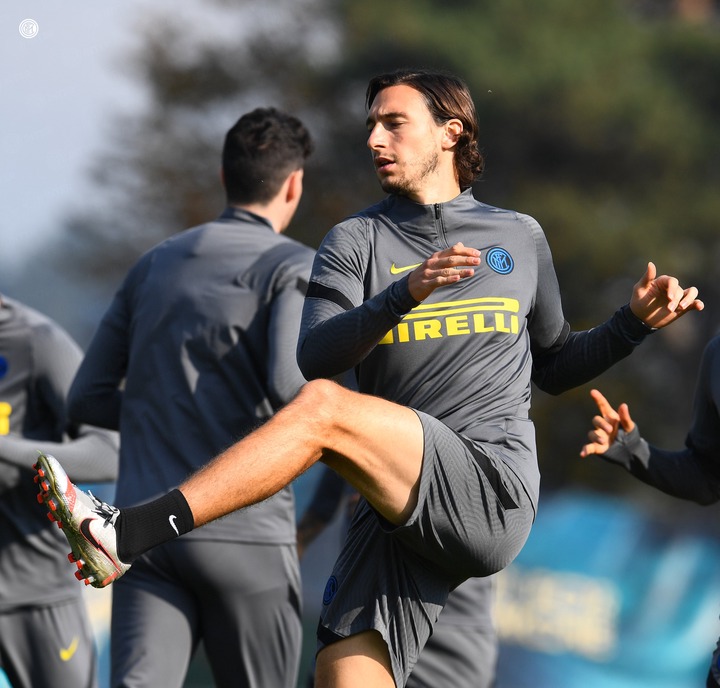 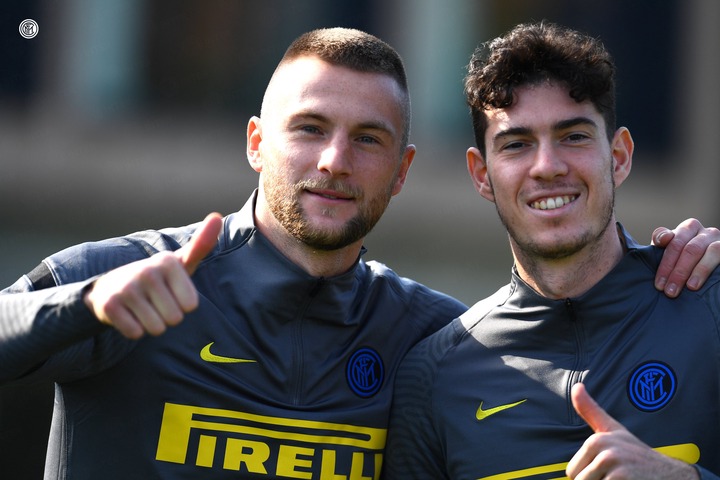 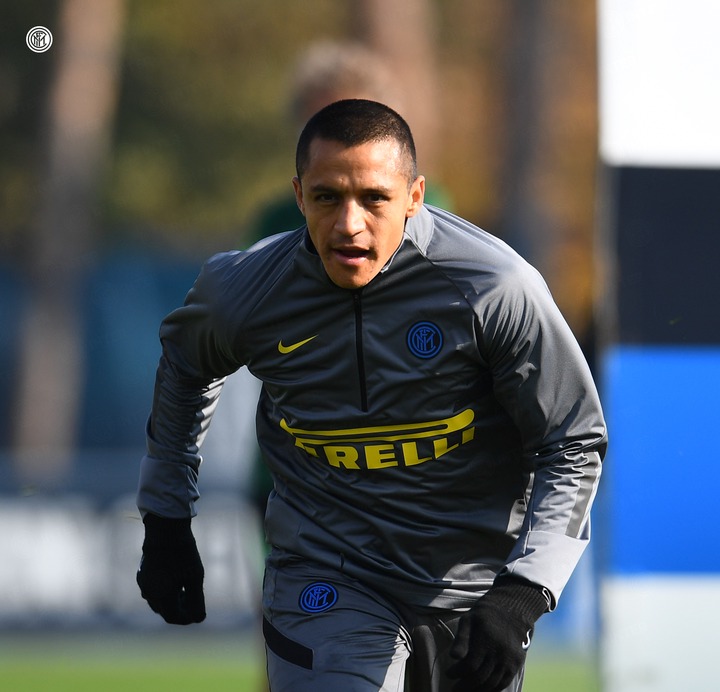 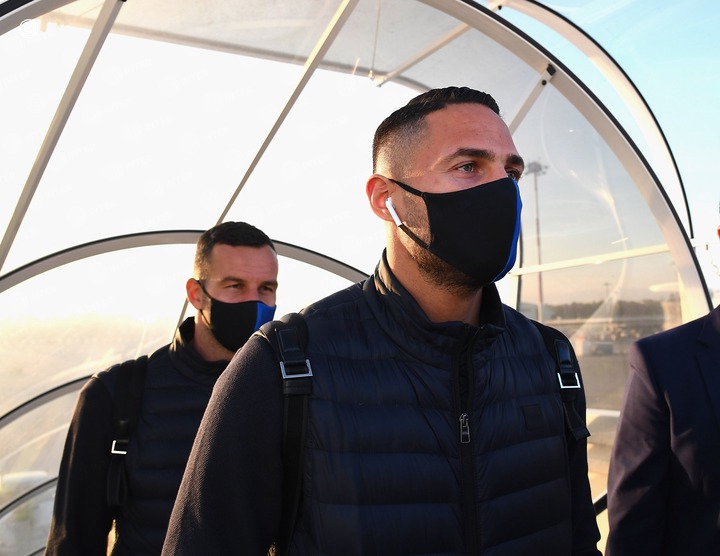 The absence of Romelu Lukaku and poor form of Martinez is already a big blow for Inter, and given the ability of Madrid to produce goals from different sources, we see them taking the day. Real Madrid 2-1 Inter Milan 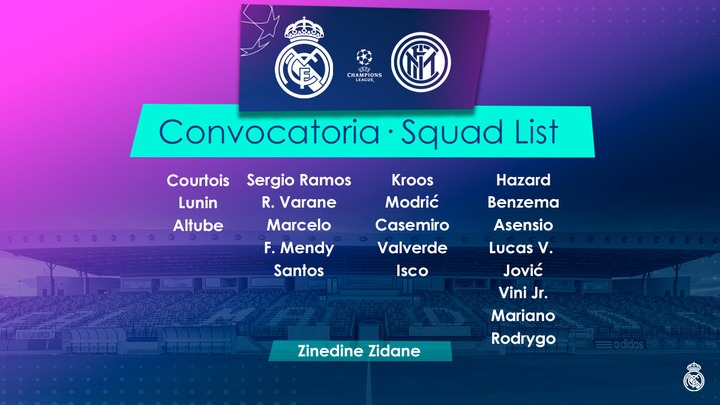