Manchester United take on their fierce rival Chelsea FC, in the FA Cup semi-final at Wembley stadium on a Sunday evening.

On Saturday, the other side of the semi-finals played in Wembley, saw Arsenal trample on Manchester City, which obviously shocked football supporters around the globe, producing an unlikely 2-0 result in favor of the Gunners courtesy of two goals from Pierre Emerick-Aubameyang.

I bet the rival between Manchester United and Chelsea down there in England is not a very strong or serious one, compared to the way Nigerian fans of the both team resent the two clubs here, building and taking their rivalry down here to another level.

Manchester United took on Chelsea FC for the fourth time this season, and have already outwitted their opponent in all three of those occasions, which include a 4-0 victory at Old Trafford in the Premier League as the season began, a 2-1 win at Stamford Bridge in the Carabao Cup, and a 2-0 win in the return leg of the Premier League, respectively.

Here's a little highlight of the teams' meetings this season; 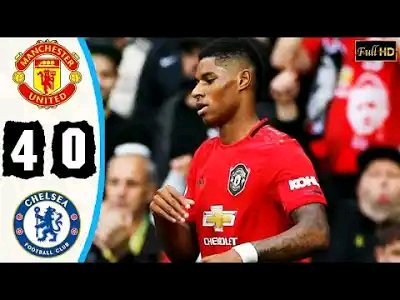 Reminisce, at the resumption of the Premier League 2019/2020 season, Chelsea visited Old Trafford and were disintegrated 4-0, forcing a record for Manchester United, as they recorded their biggest Old Trafford win over Chelsea since 1965 to condemn Frank Lampard to a miserable start as a Premier League manager.

Many taught the final scoreline was harsh on the visitors, who were the better side before the break and had earlier hit the woodwork through Tammy Abraham and Emerson, but still suffered their worst ever opening-day defeat in 104 league seasons. 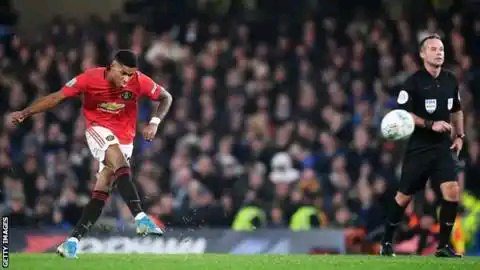 Meeting again, but this time at Stamford Bridge and in the Carabao Cup, United edged their rivals with a 2-1 scoreline, courtesy of a 73 minutes world-class and stunning free-kick that went perfectly over the Chelsea wall and into the top corner of the post after a full-stretch from Chelsea keeper, Willy Caballero, by England international Marcus Rashford, who earlier scored from the spot to give United the lead, after Daniel James was fouled by Marcos Alonso. 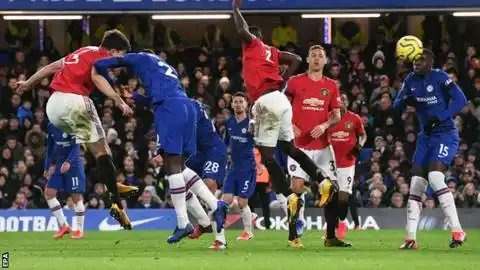 A match where Manchester United were at the receiving end of a VAR decision, in two pivotal moments, with Maguire's goal adding insult to injury as Chelsea felt, with understandable conviction, the skipper should have been given a red card for kicking out at Batshuayi.

Where Manchester United had the decisive advantage and edge over Chelsea was in front of goal, where they made the most of their rare opportunities with a clinical edge that was notably and obviously lacking in their opponents.

Martial was on the margins for most of the first half but showed his quality with an angled header beyond the grasp of Chelsea keeper Willy Caballero.

United supporters would often taunt and jab Chelsea supporters, boasting how they have defeated their rivals on three different occasions, with two coming from Stamford Bridge, often dubbing it "rape". 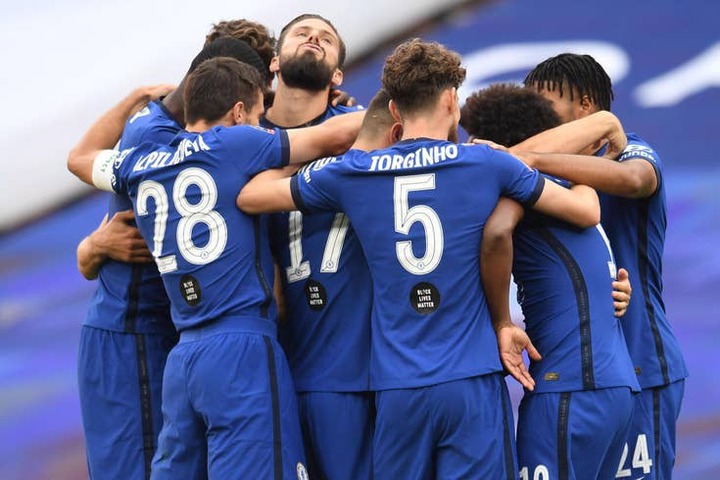 Chelsea have finally edged their rivals after a fourth attempt to secure an all London club FA Cup finals with Arsenal who saw off United's noisy neighbors, Manchester City on Saturday.

Chelsea seem to have redeemed themselves against a United team who have produced a tally of eight goals, to the Blues' one in three previous meetings this season, breaking their winning streak in all competitions.

Chelsea were always meant to outwit Manchester United, who have seen out their last two matches in an unlikely fashion, the team that were destroying their previous opponents prior to the Southampton draw by three or more goal margin, seem to be caught and doomed by fatigue.

That is what happens when the manager names the same starting line-up in five different games, and playing three times within seven days.

After Chelsea edged Norwich on Tuesday in the Premier League, they have had 48 more hours to rest than Manchester United, who visited Selhurst Park on Thursday, with a win that was also influenced by a VAR decision. The first half of the match was a somewhat dramatic and fierce one, with Manchester United adamant and persistent starting their build up play from the back, looking shaky on few occasions

Manchester United never really looked like posing a threat, with a Bruno Fernandes free-kick the only shot on target for the Red Devils.

In an unlikely fashion, the first half will go into history as it featured an additional time of more than ten minutes, as it was an initial five minutes added, due to Eric Bailly's two moments of head clash, with the first with Chelsea's defender Zouma, and the follower with his own team mate Harry Maguire.

Moments after the player was treated and substituted for forward Anthony Martial, Giroud scored an unexpected flick from skipper Azpilicueta's cross, which De Gea got his hands on but not enough to keep it out of the net. 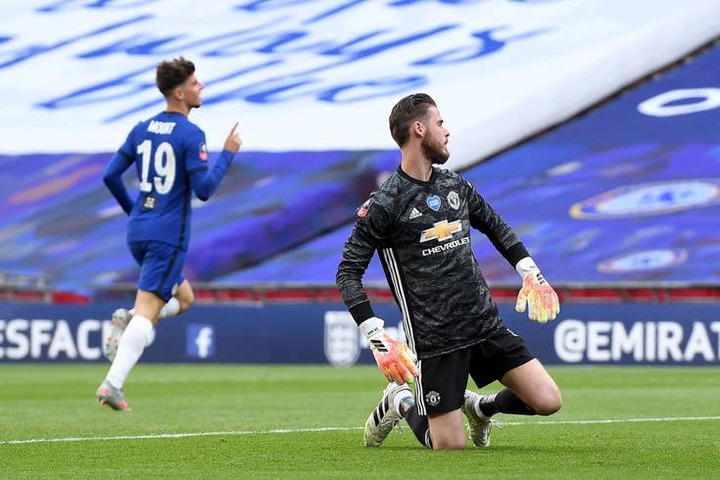 The second half started in also a dramatic fashion, moments later from kick-off, Mason Mount capitalized on Brandon Williams, who have not quite been putting in any performance on the night with a black eye, gifting the ball to Mount who took it from near halfway line to whip a shot in that could have been kept by De Gea, but it seems the shot-stopper misjudged the kick and in the ball was.

Looks like the unforseen substitution of Eric Bailly turned things around for the Blues and against the Red Devils. 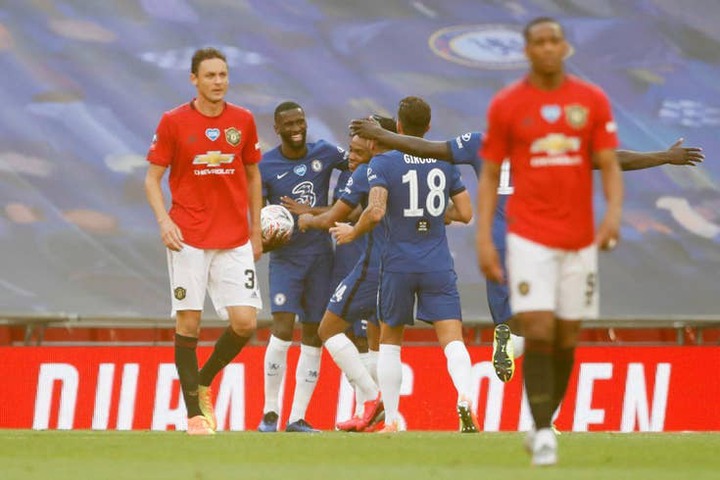 Maguire turned the ball into his own net for the Blues, with pressure from Antonio Rudiger on the 74th minute, an own goal after much pressure and attacking threats from the Blues who had earlier forced a fantastic reflex save from De Gea, here, the keeper had no chance. 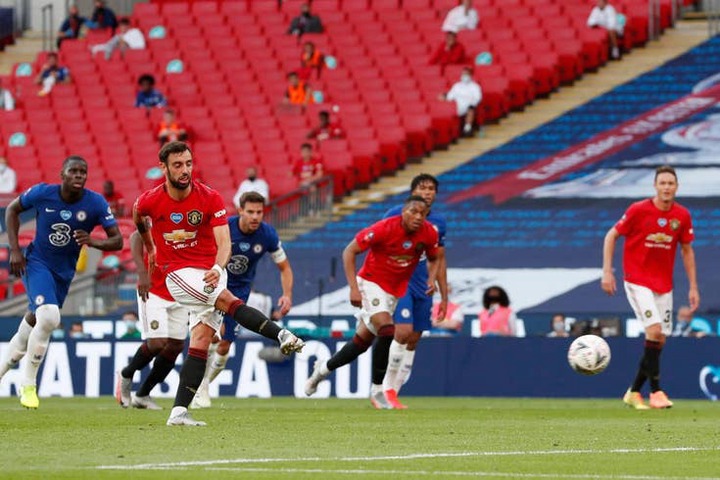 Manchester United pulled one back, yes of course from a penalty converted by Bruno Fernandes after Anthony Martial was brought down in the box by Callum Hudson-Odoi, a consolation in a way.

The both team will now switch their attention to the Premier League, in a quest to secure the top four spot as Leicester City slipped with a 3-0 defeat to Jose Mourinho's Tottenham.