Several women from WWE’s infamous Attitude Era don’t get their flowers, so to speak. Outside of Hall of Famers like Trish Stratus, Lita, Jacqueline, and Ivory, there were a handful of performers who helped to legitimize the roster when the company was still putting its women in evening gown matches and bikini contests. Among them, no one deserves more credit than the former WWE Women’s Champion, Jazz. 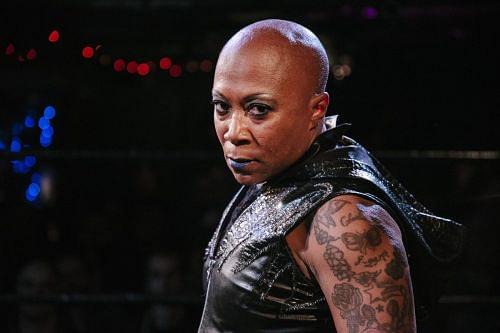 During a recent interview with Chris Van Vliet, the former WWE Superstar revealed that she is officially retired from in-ring competition. Apparently, Jazz planned to promote a farewell tour this year but she wasn’t able to because of the COVID-19 pandemic. Incidentally, she was also set to receive the 2020 Women’s Wrestling Award at the Cauliflower Alley Club Reunion in April.

The Memphis native also divulged that issues with her “knees and my back and more issues physically, mentally, and emotionally,” forced her to relinquish the NWA World Women's Championship last year. The Female Fighting Phenom was only the second African American woman to hold the legendary title.

Jazz initially made a name for herself as Jazzmine as a part of Paul Heyman’s vision for wrestling with ECW. She credits the owner of the notoriously hardcore company for pushing her and helping her to achieve so much in a short period. Later, she and Heyman made the jump to WWE as part of the Invasion storyline after ECW went bankrupt.

The 22-year veteran made her in-ring debut at WWE Survivor Series 2001 where she competed for the vacant WWE Women’s Championship in a Six-Pack Challenge featuring Stratus, Ivory, Jacqueline, Lita, and Molly Holly. Stratus ultimately won the title for the first time at the event, but Jazz would eventually become a recurring foil for the women’s wrestling legend. In fact, she was instrumental in Stratus’ development into the face of WWE’s women’s division after Chyna left the company.

Jazz defeated Stratus for the title a few months later on the Feb. 4, 2002 episode of RAW. The Female Fighting Phenom held her first championship for 97 days. During that time, she attained the biggest win of her career when she successfully defended her title against Lita and Stratus in a triple threat match at WrestleMania 18. Unfortunately, a knee injury forced her to drop the belt to Stratus in a hardcore match on May 13.

In January 2003, Jazz made her return and went on to become a two-time WWE Women’s Champion at Backlash in April. Her three-year run with WWE came to an end in November 2004. Jazz made an impact with the company in a short time that would go on to define her career.

Although she is the most well-known for her time with WWE, Jazz worked with several independent promotions such as the New Jersey-based Women Superstars Uncensored (WSU). In November of 2010, she notably unsuccessfully challenged Mercedes Martinez for the WSU Championship in the main event of their first internet pay-per-view, Breaking Barriers.

In the following year, she joined Marti Belle as a replacement for her injured partner, Tina San Antonio, to win the WSU Tag Team Championship at the fourth-anniversary show on Mar. 5, 2011.

Jazz also appeared at the inaugural Shine Wrestling event on July 21, 2012. She worked with the likes of Mercedes Martinez, Sara Del Rey, Saraya Knight, and Ivelisse before she made her final appearance with the promotion on April 19, 2013. The Female Fighting Phenom also debuted for Chikara in September 2016 in the 2016 King of Trios tournament alongside Victoria and Mickie James as Team Original Divas Revolution. However, her biggest claim to fame as an indie wrestler would come a few weeks later.

On Sept. 16, 2016, Jazz defeated Amber Gallows for the NWA World Women's Championship at NWA Texoma. She held the title for 948 days, making her the longest-tenured NWA women’s champion of the modern era. This feat put her among women’s wrestling legends like The Fabulous Moolah and June Byers with the third-longest reign in the history of the title.

Last year, Jazz made headlines when she participated in the Women's Casino Battle Royal at AEW All Out. In November, she made her Pro Wrestling: EVE debut in the third annual SHE-1 Series.

It is a shame that WWE hasn’t invited Jazz back to appear in the women’s Royal Rumble like some of her peers. She paved the way for women’s wrestlers long before the company’s self-inflicted revolution. If there is any justice in the world, they will eventually celebrate Jazz for her contributions and induct her into the WWE Hall of Fame.