After arriving at the Blues during the summer of 2018, the Spaniard has yet to find consistency and deliver consistent displays on a regular basis. He has not exactly been an ideal replacement for Thibaut Courtois who left the club during that same summer in order to join Real Madrid.

Here is the compilation of top four goalkeeper that may replace him in the summer if Chelsea FC decide to go for his replacement. Top of the list is Athletico Madrid goalkeeper, Jan Oblak. Chelsea have increased their interest in Oblak in the past few weeks and it is believed that there is possibility that the Madrid club's No. 1 goalkeeper may join the London Club in the summer.

Jan Oblak (born 7 January 1993) is a Slovenian professional footballer who plays as a goalkeeper for Spanish club Atlético Madrid and the Slovenia national team.

Oblak signed for Portuguese club Benfica at the age of 17, and was part of the team that won the domestic treble in the 2013–14 season. He then moved to Atlético Madrid for a fee of €16 million, becoming La Liga's most expensive goalkeeper at that time. In 2015–16 he won the Ricardo Zamora Trophy for best goalkeeper, conceding an all-time record low of 18 goals. He won the award again in the following three seasons. Oblak was also nominated for the 2017 and 2018 Ballon d'Or awards, following his consistent performances with his club.

With over 250 appearances for Atlético Madrid, Oblak has won three trophies with the club, including the 2018 UEFA Super Cup by defeating city rivals Real Madrid.

Oblak made his senior international debut for Slovenia in 2012. He is also regarded as one of the best goalkeepers in the world. Another keeper that Chelsea can consider signing in the summer is Everton Number 1 goalkeeper, Jordan Pickford. Chelsea Fc showed interest in the England No. 1 last summer but the presence of Kepa make the deal impossible as it will be difficult for him to be a second choice at Chelsea..

Jordan Lee Pickford ( born 7 March 1994) is an English professional footballer who plays as a goalkeeper for Premier League club Everton and the England national team.

Pickford has previously played for Sunderland's academy, reserve, and senior teams in addition to loan spells at Darlington, Alfreton Town, Burton Albion, Carlisle United, Bradford City and Preston North End. He signed for Everton for a fee of £25 million in June 2017.

Pickford has represented England at under-16, under-17, under-18, under-19, under-20 and under-21 levels. He received his first call-up from the full England national team for the 2018 World Cup qualifier against Slovenia in October 2016, making his debut in November 2017 in a friendly against Germany. He was the starting goalkeeper in England's 2018 World Cup fourth-place finish, leading the squad to its first semi-final appearance since 1990 with a penalty shootout victory in the second round and a clean sheet in the quarter-final. Onana was one of the stand-out players for the Ajax Amsterdam team which won the Eredivisie and reached the semi-final stage of the Champions League last season. The Cameroon commands himself well in the box and has good position and ball distribution, though his reflexes are something which needs to be improved on. He is just 23 and has time to improve that.

André Onana (born 2 April 1996) is a Cameroonian professional footballer who plays for Dutch club Ajax and the Cameroon national team, as a goalkeeper.

Onana joined Barcelona in 2010, after starting out at the Samuel Eto'o Foundation. In early January 2015, it was announced that he would join Dutch club Ajax in July 2015. The transfer was brought forward later that month. He made his debut for Jong Ajax in the Eerste Divisie in February 2015. He signed a new contract with Ajax in May 2017, running until 2021. In March 2019 he signed a further new contact, until June 2022. In May 2019, Onana spoke out about being a black goalkeeper, saying they had to work harder than their white counterparts due to misconceptions about them making mistakes.

In November 2019 he said he was interested in playing in the Premier League in England. 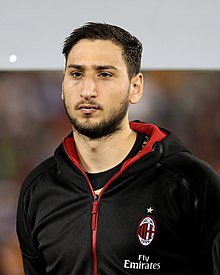 Despite being just 21, Donnarumma already boasts more than 190 appearances for the AC Milan first-team. He has drawn comparisons to the legendary Gianluigi Buffon and is expected to be the Italian first-choice goalkeeper for the long-term.

Gianluigi "Gigio" Donnarumma (Italian pronunciation:  born 25 February 1999) is an Italian professional footballer who plays as a goalkeeper for Serie A club Milan and the Italy national team.

He began his career with Milan in 2015, becoming the second-youngest goalkeeper ever to debut in Serie A, aged 16 years and 242 days; he immediately broke into the starting line-up, earning a reputation as one of the most promising young goalkeepers in the world. He also broke the record as the youngest Italy under-21 player ever to play, aged 17 years and 28 days in March 2016. Six months later, he made his senior international debut, becoming the youngest goalkeeper ever to appear for Italy, aged 17 years and 189 days.