Georginio Wijnaldum completes move to Roma on loan from PSG.

By Abhisola (self media writer) | 13 days ago

Georginio Wijnaldum, a former midfielder for Newcastle and Liverpool, has been revealed by Roma after joining the team on loan from Paris Saint-Germain. 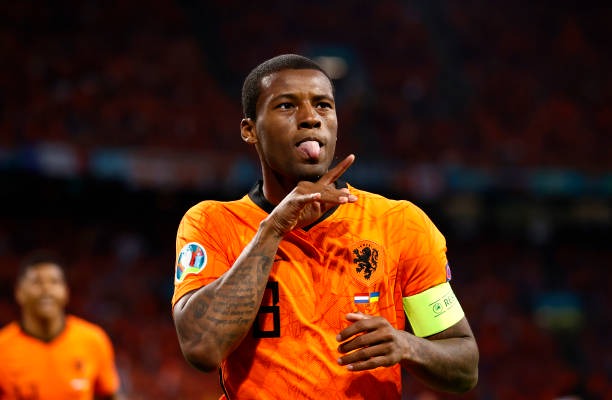 Wijnaldum, 31, joins the team following a miserable year in Paris after leaving Merseyside on a free transfer last summer. During that time, he only appeared in 38 games and scored just three goals.

Wijnaldum was seen coming out of a pool while whistling the tune to the song that was performed for him at Liverpool the tune of This Girl by Kungs, revealing the Dutch midfielder on their social media accounts.

Hundreds of fans surrounded him when he first arrived in Rome on Friday during the day as they waited for Roma to officially announce the signing.

The midfielder, who will represent Holland at the World Cup in Qatar this winter, claimed that the club's evident urgency to complete the move gave him a lot of "assurance" that he would be a good fit there.

After the current season, there is an option in the agreement to make the change permanent.

Being a Roma player, according to Wijnaldum, is a pretty fantastic feeling.

"The club made it plain just how much they wanted me in the efforts they made to clinch the deal," the player said.

"The response from the supporters, both online and off, has been wonderful."

"I promise to offer everything I have and support the club as we battle for all of our goals this season."

Wijnaldum, who originally arrived in England in 2015 after being acquired by Newcastle from PSV, moves to the Italian city alongside Paulo Dybala, Nemanja Matic, Zeki Celik, and Mile Svilar.

After the French champions signed former Swansea midfielder Renato Sanches from Lille on a five-year contract, Wijnaldum's transfer to Roma was eventually approved.

Content created and supplied by: Abhisola (via Opera News )