By Chuksogbu (self media writer) | 6 months ago 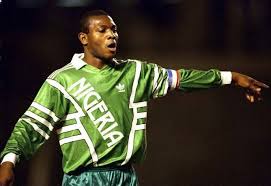 In January 1985 players were invited to Eagles camp for the first phase of camping for a world cup qualifying match against Kenya coming up in April. Among those invited, New Nigerian bank FC (NNB) had about five players.

The latter six players reported to camp when the deadline NFA gave to report to camp has elapsed.The truth of the matter was, the star man of Bendel insurance, Clement Temile has gone to Warri the town he was brough up to loosen up after a high profile transfer to IICC of Ibadan . As for NNB players, all of them had an unspoken grudge against NFA for according to them,aiding Rangers to win the 1984 Nigerian league.

They reasoned that if NFA had allowed them to play the last match against Calabar Rovers in Calabar they could have won and gain the two points to win instead of the 2-2 the club played. They were bitter that Rangers players that was in camp with them before Eagles match against Liberia were allowed to play the match but themselves were barred from playing the match in which Rangers won ACB of Lagos at home to carry the league.

Indeed they cried injustice when Patrick Okala, Charles Okonkwo, Sunny Ikwuagwu and even Kingsley Onye (mature) in U20 camp were allowed to play for Rangers while about six of them in camp were allowed to travel to Calabar but not to participate in the match, even their own Player in U20 camp Augustine Igbinabaro was not allowed to play by NFA. NNB and Rangers were on same point but NNB was on top with superior goals aggregate and this was when wining points were two points not three. Rangers won while NNB draw with Rovers, so Rangers took the league with one point more than NNB.

New Nigerian bank players had the previous two months in November played the challenge cup semi-final against the rampaging Leventis united who had won the 3rd division league and gained promotion to division 2. They lost the match 2-1 and also played WAFU cup final two weeks latter winning Stade Malien of Bamako home and away to retain the cup. So now, they did not understand the long camping of a match to be played three months latter. Besides, their club did not help matters as they told NFA that the players just reconvened for the new season after the holidays and had various problems. While Keshi said his daughter was sick and had to stay back and play his Fatherly role, Henry Nwosu said he went to Owerri for the final burial of his grand mum.

When the players arrived games village camp of the Eagles, only Humphrey Edobor was accepted to camp as they said he wrote a letter from Benin notifying them that family problem held him back and will arrive latter.The NFA chairman then,Tony Ikhazoboh instructed Coach Udemezue not to allow the other players into camp and went to meet the equally Air force officer like him and sports minister, Emeka Omeruo. The players had to lodge in a hotel their club uses when they're in Lagos. Then the disciplinary committee of NFA met two days latter and it was announced in the evening that Stephen Keshi, Henry Nwosu, Sunday Eboigbe and Bright Omokaro all NNB players and Clement Temile of IICC has been suspended for One year from the national team and will also not take part in the league for six months when it resumes. In addition, NNB was fined #3000 for not releasing the players as admitted. Also fined was Temile's new club IICC of Ibadan. The clubs were also given a deadline to register new players to replace those suspended if they want.

All pleas from all quarters fell on deaf ears even from Coach Chris Udemezue and the players but the NFA chairman said indiscipline will not be condoned in the national team. He was also livid that the transport fares of the players was since paid through Bendel FA

By end of the month when pleas for pardon was not granted Keshi packed his bags and moved to Stade Abidjan on the strength of his performance for Eagles at the nations cup held in that country. Stade Abidjan demanded for his international clearance from Nigerian football association which was not given. Already a popular player in that country after nations cup, Stade waited for three weeks without hearing from NFA and registered Keshi without clearance handing him the captains band in the process even without him hearing a word of French then.

Henry Nwosu was not as lucky when he went to ASEC Mimosa and they demanded for his international clearance from NFA which didn't come too, after waiting for about two months and didn't get the Keshi treatment he returned to Nigeria. (He was to return to Ivory Coast in three years time to sign for the same ASEC) it was instructive to note that after the match against Kenya in April of that year, the NFA quickly made a U turn and lifted the suspension of the players when the match against Tunisia was approaching but that was after coach Udemezue had discovered Mike Emenalo and invited him from Rangers. Emenalo in the absence of Keshi partnered Ogboin Fawole in the central defence against Kenya and partnered the pardoned Eboigbe against Tunisia.

Keshi played for Stade Abidjan for a season before their rival Africa Sports snapped him up in 1986. Before the end of 1986 season in Europe the president of K.S.C Lokeren in Belgium was on a business trip in Abidjan and afterwards went to see a match involving African sports with his host. There in the state box he saw a big lad Marshalling and controlling the defence line of Africa Sports with ease. Back to his hotel, he called the club and told them he was ready to do business with them right away.

That was how Keshi was on the plane to Belgium to start a career in Europe by July of that year in the space of one and half year of leaving Nigeria! Their season started in early September and he become a hit when he silenced the rampaging duo of Anderletch strikers Eddie Krncevic and Arnór Guðjohnsen in a league match.( By the way Arnór is the Father of Eidur Guðjohnsen former Chelsea and Barca player) By January window of 1987 more demands for Nigeria talents were wanted by Belgium clubs. Though few Nigerian players like Owubokiri, Silvanus Okpala and Okey Isima were playing in France and Portugal then, Keshi Opened the main floodgate as Samson Siasia was next to land in Belgium because of Keshi, Rufai followed from Benin republic then Phillip Osondu, Etim Esin,Eguaveon, Uche Okafor amongst others. People like James Etokobe went to Norway.

By the end of 1987 season, the big fish of a club in Belgium Anderletch signed Keshi to Marshall their defence. Keshi also made his return to the national team during this time in a match against Sierra Leone. After Maroc 88 where Keshi played only two matches cos of club commitment and Nigeria came second in the tournament, more demands of Nigerian players were made especially in Belgium. The real exodus started, Osaro Obabaifo, Adeolu Adekola, Dahiru Sadi, Yisa Shofoluwe, Ademola Adeshina and other players so numerous I can not mention here because of space. Rashidi Yekini's deal ended as agent defrauded him in London, he had to come back and joined Africa Sports in Abidjan. By 1989/90 the players movement became uncontrollable, even Keshi had a hand in Ghana's exodus starting from Odartey Lamptey.