Manchester United vs Chelsea, who will win Sunday's march.

Chelsea FC & Manchester United will clash for the fourth time this season at Wembley stadium on Sunday 6pm. 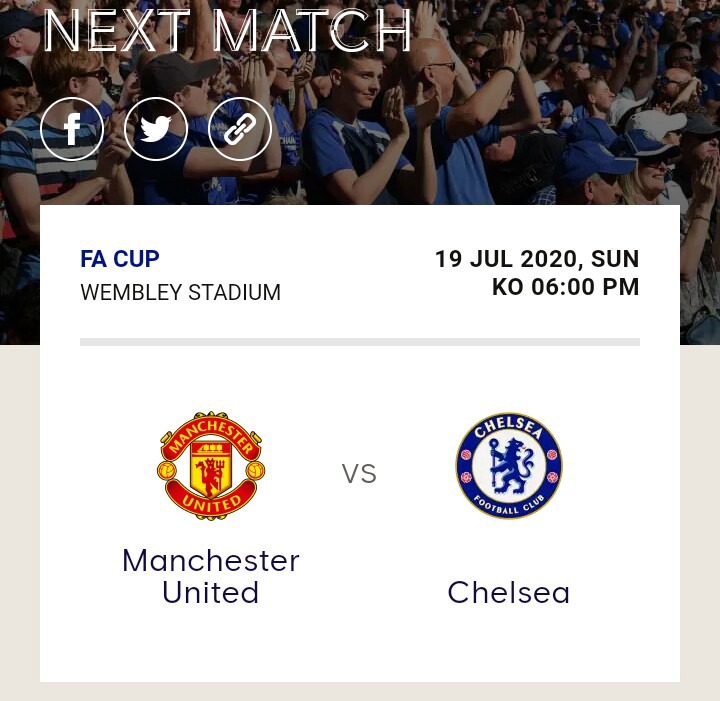 The both strong team will have to secure a win to the final spot for the FA cup as they play their semifinal second leg at Wembley stadium.

Looking forward to see who will win the Derby match as both current team have been battling the top 3 at the EPL League table with Chelsea 63 point 1 point clear form Manchester united with 62 point having score crystal palace 2 to nothing yesterday night to secure there chance to to the spot.

Manchester United have already been in form by winning any team that cross their way since the restart of the season with their key player Bruno, which have bring good luck for them since he came to the club. But their recent performance slow down as the draw a match before wining crystal palace last night

For Chelsea things don't seems to go right as thee current defensive line are out of form and loosing some of their EPL match. Chelsea have been facing serious problem since their two years transfer band which their left the no option but to put their young academic graduate into line to play against big teams but still that will not stop them from winning as their team is very strong and tough as they beat Man city 2-1 in a EPL match.

Man United have defeated Chelsea well enough this season I hope Chelsea will look forward to see this match through, although Man U may not like to give a chance. According to the both team current form whom did you think will win Sunday's Derby match.

Content created and supplied by: El-Heema3001 (via Opera News )

Reasons Why Ole Gunnar Should Start Cavani Ahead Of Ronaldo

Where Will Satan Be During The Millennial Reign Of Christ?

Tips To Getting Rid Of Blackheads

Healthy Tips To Maintaining Your Beauty And Glow