(Opinion) Between Zidane and Conte who is best suited for Man United if Ole gets sacked?

By erictimelessbeauty (self media writer) | 22 days ago 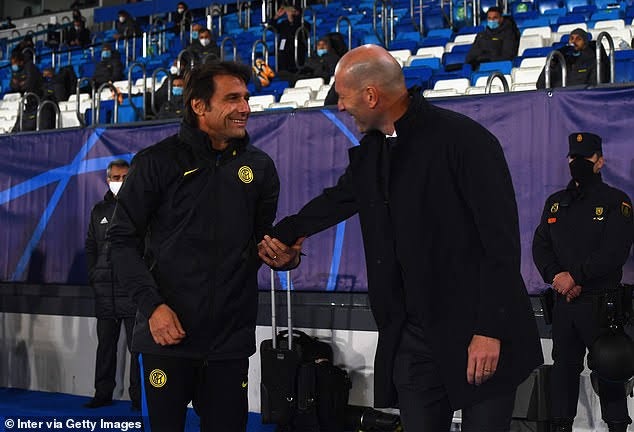 Calls for Ole's sack increased after Manchester United suffered a back to back defeat at Old Trafford. Even though it is improbable that Manchester United is going to sack Ole Gunnar Solskjaer any time soon, some fans are beginning to argue about who should replace him in the event of his getting sacked.

One reason why people are speculating about whether Zidane or Conte would take over from Solskjaer as Man United's next coach is because both coaches are without a club at the moment and both have intimidating résumés and pedigrees. Interestingly, both managers were once teammates at Juventus.

However, Conte in my view should have the upper hand as far as coaching Manchester United is concerned. He succeeded in Juventus, Inter Milan and Chelsea. This makes him more experienced than Zidane. Apart from having a lot of coaching experience from different leagues, Conte has specifically coached in the Premier League. This is very vital.

Furthermore, what Conte did with Inter Milan was sensational. He led Inter Milan to their first league title in 11 years (Inter hadn't won anything in the ten years before last season when Conte won the Italian Serie A with four matches to go).

Antonio Conte also won the Premier League in his first season in charge of Chelsea. The man has proven himself in various places.

Some are of the opinion that Conte's record in European competitions hasn't been great. Maybe they are correct but didn't he take Inter Milan to the Europa League final?

Zinedine Zidane on the other hand is a legend. As a player, he won the World Cup, Champions League and lots more. Furthermore, Zidane booked his place with the greatest coaches in Europe by winning the Champions League three times in a row. This was unprecedented!

For those who continue to insist that it was a fluke, remember that Zidane returned to Real Madrid and was able to clinch the Spanish League title in his first season back despite the fact that Christiano Ronaldo had already left Madrid for Juventus.

Some argue that Zidane won all his trophies because he had a very talented Real Madrid team. To support their argument, they point out the fact that his predecessor, Carlo Ancelotti also won the Champions League with the same crop of players. The big question becomes "Can Zidane succeed outside Real Madrid?"

Take nothing away from Zidane, he has achieved laudable feats in just a few years of coaching. The truth though is that compared to Conte, he is far less experienced. Manchester United ought to be wary about replacing Ole with someone that can still be seen as a greenhorn as far as coaching is concerned.

Who do you think is better suited to replace Ole Gunnar Solskjaer if the Manchester United gaffer was to get sacked?