By [email protected]'s (self media writer) | 2 years ago The game was probably the most anticipated game for Serie A fans. The first half of the game was controlled by Juventus, they made good and quick passes but they were unable to move into the box of Lazio. Juventus was the first to have a decent chance of the game after the shot from Douglas Costa, but it was a direct shot to the goalie. 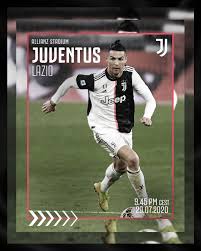 Ronaldo also shoot a couple of times butthey were properly blocked by the Lazio defenders. Both teams hit the bar in the first half, Juventus hit the bar first after a nice free kick from Dyabla to De Ligt, who then made a back pass to Alex Sandro who was denied by the side of the goal post.

Immobile also hit the bar for Lazio after a good shot. Immobile has 29 goals this season, 1 more than Ronaldo and we all know they both want to be the highgoal scorer of the season.

All the goals of the game was scored in the second half of the match. The first goal was a penalty kick after a shot from Ronaldo was blocked by the defender of Lazio. Ronaldo converted the penalty which gave him his 29th goal of the season. Just 3 minutes later he scored his second goal after Lazio defender lost the ball to Dybala who then made a quick pass for Ronaldo, who scored with an easy tap in.

Ronaldo had acouple of chances after his goals, he had about 3 headers but was unable to convert he was denied by the goal keeper and the bar of the goal post on two occasions. With the 2 goals, he now has 30 goals this season. Immobile also scored in the match from a penalty kick after a rough challenge on him by Bonucci. Ronaldo became the fastest player to reach 50 goals in Serie A and thefirat player to score 50 goals in 3 different leagues. Immobile is also at 30 goals this season.

This is the second time in Serie A when two players have scored 30 goals in the season. I am sure they will score more.

Is Ronaldo not the G.O.A.T?? Drop your comments. Don't forget to like and follow for more news.

Content created and supplied by: [email protected]'s (via Opera News )