At the height of her meteoric rise to WWE superstardom, Becky Lynch never backed down from a challenge and wasn't the least bit shy about laying one down either. No potential opponent garnered as much attention as when The Man threw the gauntlet to WWE Hall of Famer Beth Phoenix. 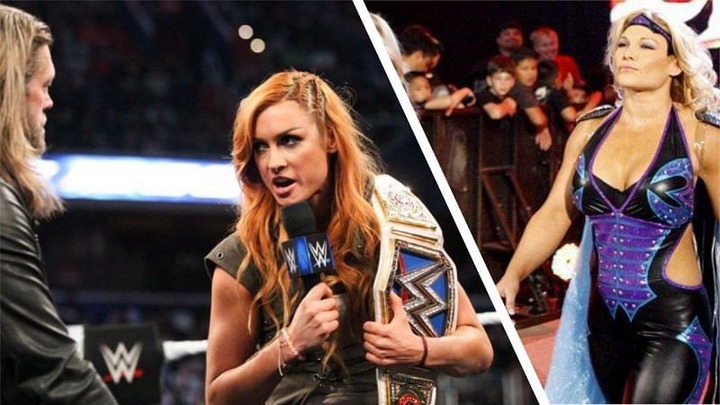 That's what Becky Lynch told Cathy Kelly during a WWE Now interview back in June 2019. That very same month, we saw a highly entertaining exchange of social media jabs and insults between herself and Beth Phoenix.

"I say this all the time, I'm going to get myself in trouble, but like it's the never say never scenario. Right? I'm one of Becky's biggest fans. When we talk about breaking down barriers, she's definitely one of those women that's been at the forefront of this, like you know, eliminating the category of like female Superstar. She's just a Superstar, right? And, we could say that about so many of our WWE women, but yeah, I mean never say never. I hate that answer. That's like the most unsatisfying answer ever, but that's where we live in the semi retirement life." While promoting the new WWE Network documentary  "HEAVEN" with SK Wrestling , Beth Phoenix was asked about the 2019 online rivalry. Obviously, a lot has changed between then and now, but does the possibility exist that we see Becky Lynch vs. Beth Phoenix one day?

Since her retirement, Beth Phoenix has returned to compete in four matches in WWE - all of which were multi-women matches. She took part in the 2018 and 2020 Women's Royal Rumble matches. She also competed in an eight-woman tag team match on the RAW before WrestleMania 35 and then teamed with Natalya in the Women's Tag Team Championship match at WrestleMania 35.

Beth Phoenix's last one-on-one match was against AJ Lee on the October 29th edition of Monday Night RAW back in 2012. That said, there's no question that The Glamazon can still get after it in the ring. Just a little over a year ago, she had a very impressive showing in the Royal Rumble. She lasted over 27 minutes and finished in the final three despite suffering a pretty nasty head wound during the bout.

If a singles match with Becky Lynch isn't in the cards, would Beth Phoenix go for a dream mixed tag team match?

As if the epic Twitter rivalry between Becky Lynch and Beth Phoenix wasn't fun enough, The Rated-R Superstar found himself right smack dab in the middle of it all. The whole exchange was sort of an off-screen follow-up to a Cutting Edge interview on an episode of SmackDown in 2018, where The Man took a bold shot at Edge's (at the time) career-ending neck injury.

What was once a dream scenario is suddenly a very real possibility. Becky Lynch and Seth Rollins vs. Beth Phoenix and Edge in a mixed tag team match for the ages. Before you get too excited about seeing these two couples battle it out, Phoenix told SK Wrestling that  IF  that match ever happens, it's not going down any time soon.It may seem like forever and a day ago now, but at the time of these tweets,  Edge  was still retired. Not only was he retired, but the general consensus was that he had zero chance of ever competing inside a wrestling ring again. As stated previously, a lot has changed since then.

"We planned to be retired, but things come up. Adventures come up. Exciting things come up. But for right now, I think Adam's plate is pretty full. So I don't know if he's got any room for any mixed tag."

Edge (real name Adam Copeland) does have a very busy schedule for the next few weeks as he prepares to take on Roman Reigns for the Universal Championship at WrestleMania 37. Not to mention the fact that Becky Lynch is still out of action after giving birth to her daughter in December.

However, you better believe that Edge is going to want to do business with Seth Rollins sometime down the line. Especially now that he can get revenge for that one time that Rollins literally threatened to kill him on live television.

If WWE is able to add Becky Lynch and Beth Phoenix to the mix, it just makes it all the more better. Phoenix jokingly told SK Wrestling that she'd do it, but only on one condition.

"Only if all our children are at ringside, to hand us weapons (laughs)."

Make sure to check out Part Two of our conversation with Beth Phoenix in the video above. Visit the SK Wrestling YouTube Channel for PART One, where Beth Phoenix previews "HEAVEN" and talks about her husband's incredible journey from retirement to main eventing WrestleMania